So why has it taken me over 100 reviews to check the place out? I’m going to be honest: I wasn’t super keen on trying it. Why? I mean, take your pick: they’re on the east end and a bit out of the way for me; they serve meatloaf burgers, which certainly aren’t my favourite; it’s an old school burger joint, which doesn’t exactly fill me with confidence. In my experience, the overwhelming majority of older burger joints are mediocre at best. Don’t ask me why.

Dangerous Dan’s is fairly well known for some of their more extravagantly-topped burgers, like the Coronary, which features a pound of beef, bacon, cheese, and a fried egg. I went much more bare-bones, with the Plain, which is an eight ounce burger topped to request.  I got mine with tomato, pickles, and mayo.

First and foremost, it is absolutely, positively a meatloaf burger. You can see the burger being made on this episode of You Gotta Eat Here, and they mix in the works. Garlic, spices, breadcrumbs, eggs — they go full meatloaf, no doubt about it.

If you’ve read much of this blog, you know that me and meatloaf burgers generally aren’t the best of friends.  I was pretty much ready to hate it — and maybe the lowered expectations helped, but I was very pleasantly surprised. The patty is super meatloafy, but it tastes good, at least. Unlike last week’s burger at BriSkit, which had a muddled, neither-here-nor-there flavour, it at least knows what it is and goes for it. It’s not a classic burger by any stretch of the imagination, and the flavour of the beef is mostly wiped out, but it tastes good for what it is.

The grilled burger is cooked to well done, but actually remains quite juicy, which is always nice.  Though the patty was slightly over-charred from the grill, the grilling mostly added a nice smoky flavour and a satisfyingly crispy crust.

Meatloaf burgers can sometimes have an unpleasantly sausagey texture; this thankfully wasn’t the case here.  Texturally, the patty was pretty much exactly where it needed to be — it had a good grind, it obviously hadn’t been overhandled, and it was nice and tender.

The lightly toasted bun was slightly cold and a little too dense, but it mostly suited the burger pretty well.

As for the fries, they were very thickly cut, which isn’t my favourite — but for this style of fry, they were quite good (much better than you’d think seems to be a theme here).  It’s very easy to end up with an unpleasantly dense interior with fries like this, but these were lightly crispy on the outside and really fluffy on the inside. 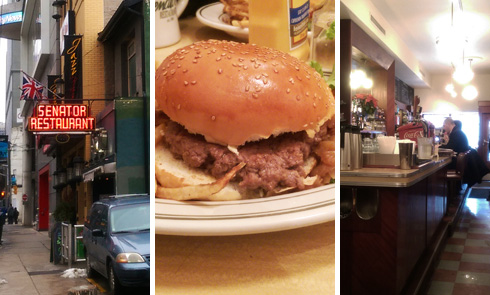 I was actually pretty excited to check out the Senator — any restaurant that’s been around since the ’30s has gotta be doing something right, and the place is absolutely lousy with old-school diner charm.

I’d also heard some pretty good things about their burger, which is reportedly made with beef from Cumbrae’s — one of Toronto’s more well-known butchers of note — and which is refreshingly cheap at $9.95 (including fries).

You know that part in Goodfellas where a character thinks he’s becoming a made man, only to be led into an empty basement where he has a brief moment of horror before a bullet goes into the back of his head?  That was my reaction when I was served this burger.  Excitement to horror in about 0.5 seconds.

Is boiling burgers a thing?  Is that something that they do?  I didn’t think so, but I really don’t know how else to account for the lifelessly pallid, colourless patty they put in front of me.

I’m going to assume that the patty was griddled, but I honestly don’t know how you cook a burger like that without getting even a hint of browning on the patty.  If this weren’t so clearly undesirable, I’d think it was deliberate.  Because seriously, how do you accomplish that?  How do you cook a piece of meat on a hot surface without browning it?  But it can’t possibly be on purpose.  Can it?

This wasn’t a one-off mistake, either, because my dining companion had the burger as well and his looked identically sad.

Of course, if this were just a matter of appearances, then who cares?  But a burger gets a lot of its flavour and texture from the griddle or the grill, so in a case like this, it’s losing out on quite a bit.  You can tell from the first bite that something very essential is missing.

It was also a meatloaf burger, and had enough stuff mixed into the patty that its Cumbrae’s pedigree was completely wasted.  No beefy flavour here; just onions and spices and other stuff that you don’t need.  It’s meatloaf — but then again at least meatloaf has a glaze and a nice brown crust from the oven.  I can’t repeat this enough: this tasted boiled.

If it even matters, the texture of the patty was otherwise okay.  I think it was a bit too finely ground with a slightly mealy texture, and the well done patty was drier than I’d like, but I’ve certainly had worse.

The burger comes with lettuce, tomato, and caramelized onions off to the side.  The tomato was sliced a bit thick, but the toppings were otherwise fine.  However, between the sweetness of the onions and the slightly sweet (and ever-so-slightly dry) bun, it was kind of sweet overload.  I wound up putting mustard on the burger to try to combat this, which I almost never do (I typically find it to be a bit over-assertive on a hamburger).   It helped, but there wasn’t much to be done here; it was a lost cause.

The fries weren’t much better.  They were completely soggy and practically dripping with grease, with the overwhelming flavour of oil that’s been reused one (or two, or three) times too many.

They even, somehow, managed to mess up lemonade.  This is a drink that consists of three ingredients: lemon juice, water, and sugar.  How do you get that wrong?  Missing one of those three essential ingredients would do it.  The drink was astringently sour, without even a hint of sweetness.  If it’s not sweet at all, is it still even lemonade?  Or is it just watered down lemon juice?  More importantly, if everything else is this bad, does it matter?

Cardinal Rule is a cozy little diner on Roncesvalles that seems to be doing pretty well for themselves; they were featured on You Gotta Eat Here, and when I went at around 2:00 on a Saturday afternoon, they were pretty much packed.

Usually when I review a place I’ll go there with the specific intention of writing a review — in this case, I just happened to find myself there and what’s this?  A burger on the menu?  Well then.

I actually almost didn’t order the burger. It’s one of those brunch burgers with the works piled on top which I normally avoid, but a big kitchen sink burger actually sounded pretty good at that moment, so I went for it.

This particular hamburger — dubbed the Wallop Burger — comes topped with “a potato latke, bacon, cheddar & a sunny fried egg on a ciabatta bun.”  So, basically it’s a complete breakfast crammed onto a burger. 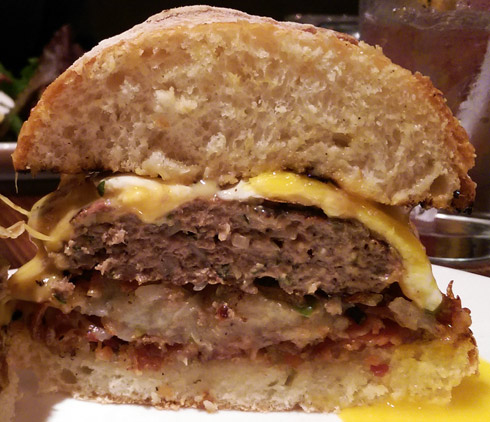 It’s… okay, I guess.  It actually should have been pretty tasty, but the burger itself is iffy.  It’s a meatloaf burger, for one thing.  And oh man, it’s so damn meatloafy.  Seriously: at what point does a burger stop being a burger and become meatloaf?  When onions are added?  Spices?  Breadcrumbs?  Eggs?  Because I’m not sure about the latter two (though I have my suspicions) but there were definitely a crap-ton of onions and spices in this “burger”.

So what makes it a hamburger and not a meatloaf sandwich?  Is it just because the meat has been formed into individual patties and not into a pan?  Is that it?  As long as one of the ingredients is beef and it’s in a patty shape, it’s a hamburger?  I just…  I don’t know.  Maybe I’m being a stick in the mud, but when you take something as simple as a hamburger and start cramming all kinds of other flavours into it, it changes its essential character so thoroughly that it’s no longer the same thing.  It’s a different dish altogether.  It’s a meatloaf sandwich.

Whatever it is, it’s over-spiced, with a face-punch of flavour but zero beefiness remaining.  It’s also quite dry and a bit more dense than it should be.

As for the other stuff, it’s not bad.  The fried egg has a satisfyingly runny yolk, and the cheese is creamy and melted.  The patty packs such a strong salty punch, however, that the bacon is mostly superfluous.  As for the latke, it’s fine, but there’s clearly a reason why you rarely find potatoes on a hamburger (or on sandwiches in general)  — it’s just adding additional starchiness that isn’t really necessary when you’ve already got bread.

The bun is a bit on the crusty side, but since there’s so much stuff piled on here, the more substantial bun is definitely quite welcome.

I don’t wanna pile onto the place, but I should mention that the service was kind of questionable.   It took about half an hour to receive our food, which seems a bit excessive for a casual diner like this.  We also pretty much never saw our waitress aside from our order being taken and the food being delivered; getting the bill was a bit of a challenge (eventually, one of us had to get up to ask for it).

196 Plates
Michael Eats
Up in the Nusair