Magoo’s is another one of those neighbourhood joints that really packs them in; pretty much any time you go, the place will be filled with  families, couples, and other locals looking for their burger fix.  It’s been around since 1987, which makes it relatively new compared to old-school places like Apache or Johnny’s, but it’s still been around for more than long enough to develop a loyal following.

And, I’m sorry to say, like most old-school burger joints, it trades more on nostalgia than taste; it’s just not that good.

I ordered the Magourmet hamburger (which is their six ounce burger; there’s also a four ounce option on the menu) as a combo with fries and a soda, and it came up to about ten bucks.

The layout was much like most old-school burger joints; you order, then when the burger’s ready, you pick your toppings from behind the glass.  I went with pickles, tomato, and Magoo Sauce, which the menu describes as “Mayo/Garlic.” 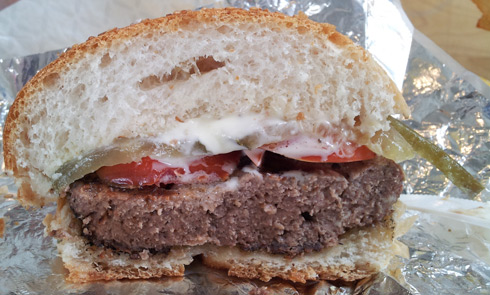 The grilled burger is meatloaf-style, with other stuff mixed in with the beef.  It has a generic meatloaf burger taste; it essentially tastes like whatever spices they’ve mixed in, without much meaty flavour (if any).  The lack of any beefy flavour is odd, because it’s not one of the stronger meatloaf burgers that I’ve had, which makes me think that the quality of the beef isn’t all that great.

It’s also surprisingly dry.  They boast that they use “100% lean ground beef,” which I’m pretty sure isn’t even possible — and even if it were, it certainly isn’t something to be proud of in the context of a hamburger.  Either way, it’s clear that the beef is too lean, resulting in an unpleasantly dry burger.  It also had a somewhat unusual texture; I suspect that perhaps the beef has been ground too finely.

The toppings were fine.  The Magoo Sauce was as advertised, and was a decent roasted garlic mayo.  The dense, chewy bun, however, was far too substantial for the burger at hand, and completely threw off the bun-to-beef ratio.

As for the fries, they were fine.  They were perfectly tasty, though there was nothing special or memorable about them.