Here’s a classic good news / bad news type of situation.  The good news: The Commoner seems like it’s a quality restaurant.  It’s quite popular, and most of the food they served when I visited was very good.

The bad news: the hamburger.  It’s not great.

Nothing about the burger is awful, but nothing is particularly good, either.

The patty is grilled (I think? It’s got that char flavour that you typically only get from the grill, but it’s possible that it was just enthusiastically griddled), and while it’s cooked all the way to well done, it’s fairly juicy.  But the texture is off — I think the grind is too fine — and it’s a little bit tough.

The flavour of the beef is another issue.  It’s generally inoffensive, but it also has a mild gaminess.  It’s not in your face, but it’s there, and it’s unpleasant.

I can maybe forgive the shoddy flavour of the meat; it’s possible that they got an iffy batch from an otherwise quality supplier.  What I can’t forgive, however?  The cardinal sin of  cheeseburger cookery: the cheese isn’t fully melted.  In my world, that would be a crime punishable by serious jail time.  Get out of here with that.

Then there’s the brioche bun.  I knew it was trouble as soon as I cut into it; it’s dry and dense.  Again, I’ve certainly had worse, but it’s not great.

Everything else was fine, though the Dijon mayo was somewhat overpowering. 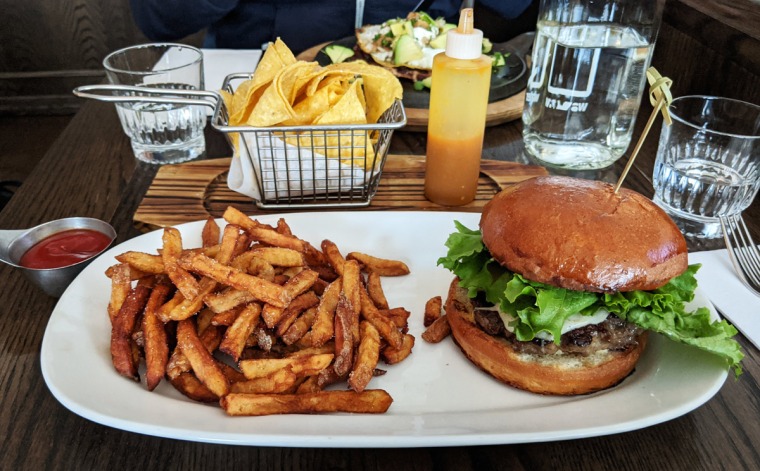 It’s not a great burger, sadly.  On the other hand: my dining companion had the huevos rancheros and said it was the best he’s ever had, and the fries that came with the burger were spectacularly delicious.  French fry perfection.  So there’s that, at least.