I like having a burger blog, but sometimes it’s a bummer.  Greenwood Smokehouse is, as the name implies, a barbecue joint.  And when I went there the other day, it smelled appropriately smoky, and I thought: I could go for some barbecue.  But I hate to pass up a chance to review a burger, so yeah.  I ordered the burger.

And it wasn’t great!  Which just made me sad about the potential barbecue deliciousness I was missing out on, but then my dining companion had the brisket sandwich and wasn’t impressed, so there you go.  Sometimes you’re not going to win no matter what you do.

Greenwood Smokehouse’s Black Angus burger is really simply topped, with just lettuce, tomato, pickles, and nothing else.  You have to admire a place that’s so confident in their hamburger that they don’t even want condiments to get in the way.

And the large patty certainly looks impressive, with a decent amount of crust from the griddle.

But the texture’s a bit off.  It was dense and chewy, and the well done patty was pretty dry.  It’s certainly not the worst thing ever, but it’s not ideal.

The flavour, too, was off.  It had a vague beefy flavour, but also a mild gaminess that I found unpleasant.  Again, it’s not the worst that I’ve had, but… it’s not great.

Everything else was pretty good.  The toppings were solid, and the bun — though standard-issue supermarket fare — was fresh and suited the burger well.

As for the fries, they were easily the highlight.  They were perfectly fried, and were nicely seasoned with a tasty spice blend.  This can sometimes be overbearing, but in this case it really worked.

After seeing pictures of the various burger specials at the Wren roughly a billion times on Instagram over the last few months, my excitement level was pretty much at a fever pitch; it’s not easy to get me to venture too far east in Toronto (I’m lazy, you see), but for an amazing burger?  Yeah, I’ll go out of my way for that.

Alas, this place suffers from a very pronounced case of Sweet Jesus-itus — highly Instagrammable, but otherwise not particularly great.

I ordered the Backyard Burger, which is the most bare-bones burger they serve (they also have a much more Instagram-friendly creation called the Uncle Buck Burger, not to mention the veritable Instagram-catnip that is their rotating special).

And yeah, of course the grind was too fine and it was too densely packed, because just look at it.  Look at it and weep.

It was also cooked all the way to the wellest of well done, and was almost entirely moisture-free.  It wasn’t the worst patty I’ve ever had, but it was kinda unpleasant to eat.

The taste, while not offensive, was non-existent; there was no particular beefy or meaty flavour.  Aside from the subtle smokiness from the grill, it didn’t taste like anything.

Everything else was fine.  The burger comes topped with ketchup, mustard, and mayo, which is more condiment-heavy than I’d usually like.  Here, however, those condiments are actually fairly essential to provide the burger with some much-needed moisture.  I actually could have used more.

The bun, though a little bit too crackly on its exterior, was mostly quite good.  It held up to the patty and the toppings nicely, and didn’t overwhelm.

The fries were the clear (and only) highlight.  They were perfectly cooked and tossed with a seasoned salt that made them taste pretty great on their own — no dip required.

Every time a new burger place opens in the city, I immediately perk up. Will it be Toronto’s next great burger joint? Who knows! It’s like an unwrapped present. Exciting!

As the name implies, Patty & Frank’s serves both hamburgers and hot dogs, though it should be fairly obvious that I’m much more interested in the former and less in the latter (this isn’t Tasty Hot Dogs, after all).

The restaurant is bright, cheerful, and incredibly spacious. I don’t think you’ll have to worry about finding a place to sit.

I typically try to order a burger joint’s namesake burger, assuming they have one, but in this case the P & F Signature is so comically overstuffed (it comes topped with, among other stuff, cheese, a hot dog, and french fries) that I knew I’d never be able to taste the patty.

So I just ordered a plain burger, waited for my name to be called, then had it topped with pickles, tomato, and mayo.

Their cooking method is a little different than most Toronto burger joints. The uncooked patty is first placed on a griddle, then finished off on the grill. You’d think that this method would result in some browning on the surface of the patty, but nope — aside from the grill marks, it was completely gray. So I can’t say I quite understand the point of the two-step cooking process. 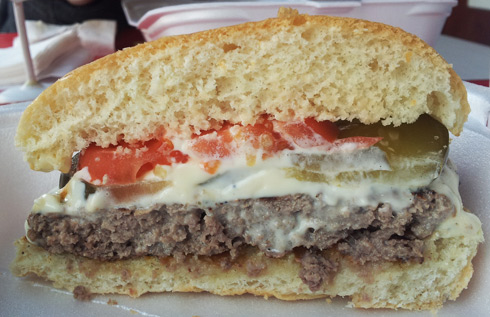 I sat down and took a bite. Sadly, it was clear pretty quickly that this wasn’t quite the present I was hoping it would be. Is there a gift receipt…?

It’s a meatloaf burger, though by the standards of this style of hamburger they’re fairly conservative with the seasonings. There’s definitely something more than salt and pepper in the patty, but it’s subtle. Still, it’s enough to knock out whatever mild beefy flavour this particular meat might have once had, which makes me sad.

The patty is also a bit on the salty side. At first I thought that perhaps this was from the mayo that was very liberally applied on my burger, but my dining companion found his burger to be a little bit salty as well.

The well done burger is somewhat juicy, which I definitely appreciated. But the patty has been really tightly packed, and is a bit more dense than I’d like. It’s odd, because you’d think that the one benefit of their two-step cooking process would be that they could grab a fresh ball of beef, smash it on the griddle and then transfer it over to the grill, which would allow for a much more loosely packed and texturally satisfying patty. But nope, the patties are formed in advance and are quite dense.

The bun tasted fresh and suited the burger well, and the condiments were fine (aside from the fairly obscene amount of mayo).

So no, Patty & Frank’s is not Toronto’s next great burger joint. It’s barely even good. I mean, it’s fine. I’ve certainly had worse. It’s a big fat meh, and honestly, I’m getting a bit sick of big fat mehs.

As for the fries, though they tasted a bit oily, they were pretty good and actually kind of reminded me of chip truck fries.