My visit to The Rhino was completely unplanned — I was in the area, I wanted to check out a burger, and hey, that place looks like it serves a hamburger.  No recommendations, no research, just a random pop-in.

My dream in situations like this is that the burger will turn out to be amazing, and that I can announce a hidden gem to the world.  I mean, anyone can go and review a place that everyone’s talking about.  Who cares?  Finding a restaurant that people wouldn’t have heard of otherwise — that’s a service to the world.

That absolutely, positively isn’t what happened here, but hey, I can keep dreaming.  One day. 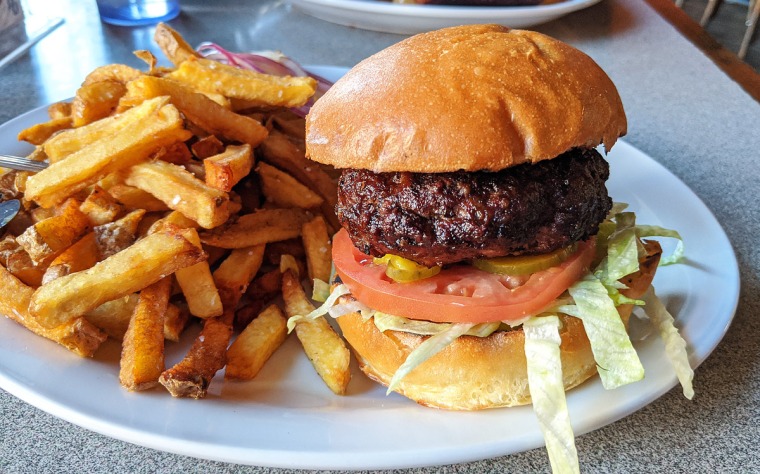 It’s not good.  And it’s not good in such a boring way that I don’t even particularly feel like talking about it.  It’s the usual bad burger trifecta: the beef is too finely ground, it’s packed too tightly, and it’s too lean.  It’s crazy dry.  I normally eat a burger as it comes, but in this case I just couldn’t stomach it.  I had to put on copious amounts of mustard (which I typically find to be way too assertive as a burger topping) just to give it some moisture, and to give the bland, personality-free beef some flavour.

I will say that the medium well patty is perfectly grilled, which gives it a great amount of smoky flavour.  Not enough to save it, of course — but it that element was nice nonetheless.

And the fresh brioche bun was quite good (not that it particularly matters).

As for the fries, they were delicious, with a delicate exterior crispiness and a perfect amount of fluffiness.  They were seasoned with big, flaky grains of salt that added more texture and nice pops of flavour.  They were top notch. 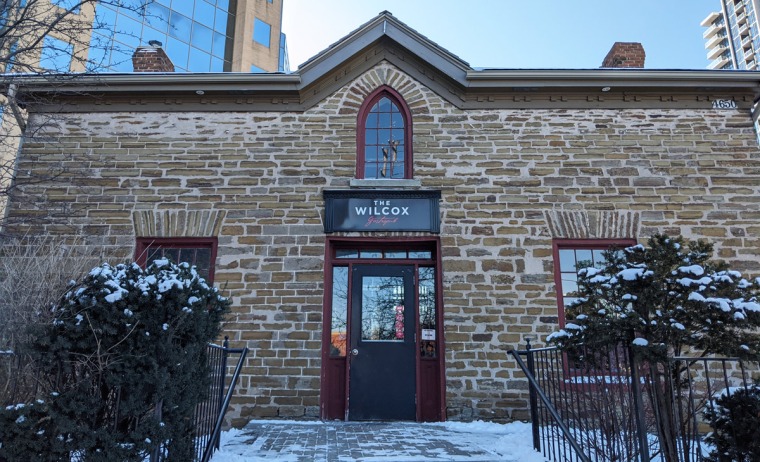 I’ve certainly had worse burgers than the one they serve at The Wilcox, but it’s rare that I eat one that feels so thoroughly misguided on every level. 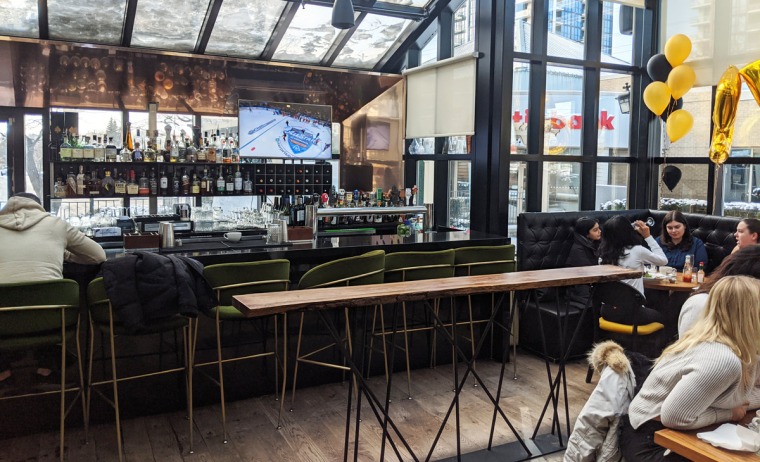 I should start with the patty itself, which has been griddled all the way to well done and then some.  It has a nice crust on its exterior, but the meat is gray and dry and punishing.  It’s the type of burger where you have to be careful not to take big bites, because it’s like trying to eat a pile of saltines — your mouth just can’t produce enough moisture to deal with it. 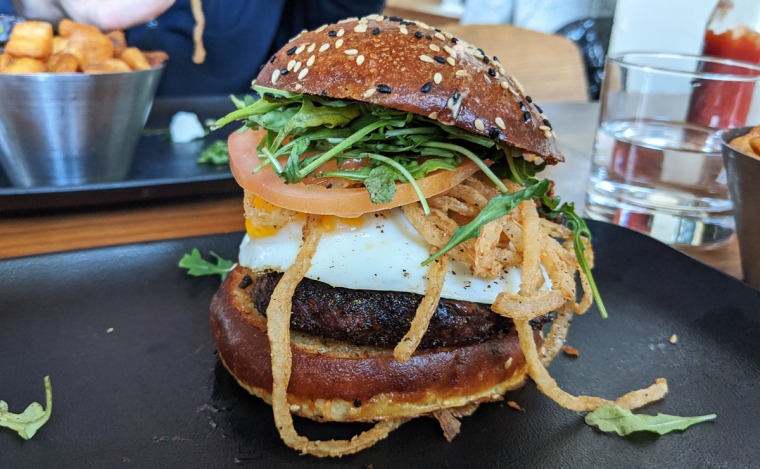 The flavour is an upgrade over the texture, but it’s not great.  This is a kitchen sink burger where the taste of the beef is basically moot, but in the few bites I got of the patty alone, it wasn’t much to write home about.  The beef is bland but inoffensive. 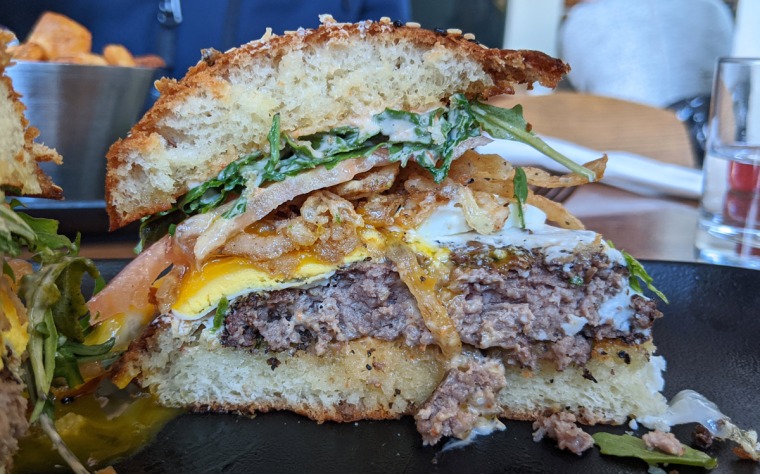 Then there’s the goat cheese.  I mentioned this in my review of the burger at The Daughter, but you almost never see goat cheese on a cheeseburger, and there’s a reason why.  The intense salty flavour and crumbly texture completely overpower the beef.

All of the other toppings are fine, in theory, but the configuration in which they’re applied here just doesn’t work.  The mix of flavours is discordant and vaguely unpleasant.  They clash.  The whole thing feels wrong in a way that’s hard to put your finger on.  It’s off.

I came at brunch, so instead of fries, the burger comes with potato hash.  The cubes are deep fried, so they basically taste like crispy fries in a slightly different shape.  They’re quite tasty. 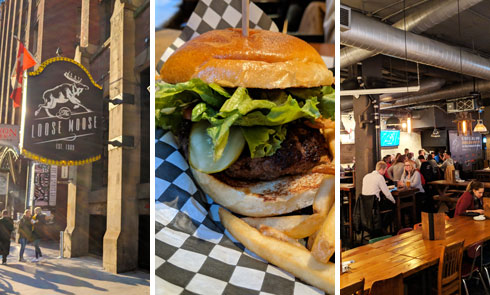 The Loose Moose isn’t part of a chain (though it is owned by SIR Corp, the restaurant conglomerate behind places like Jack Astor’s, Canyon Creek, and Scaddabush), but it serves a prototypically lousy chain restaurant burger: it’s exceptionally dry, it features personality-free flavourless beef, and it’s just an absolute bummer to eat.

It’s the type of burger that gives burgers a bad name.  I could see someone who doesn’t eat a lot of of them ordering this, eating it, and then thinking “oh, I guess I don’t like hamburgers then?”  Because it’s so far removed from what makes a good burger so great that it’s almost like an entirely different dish.  It’s unpleasant.

I got the Classic Burger, which is completely no-frills, topped only with lettuce, tomato, and pickle. 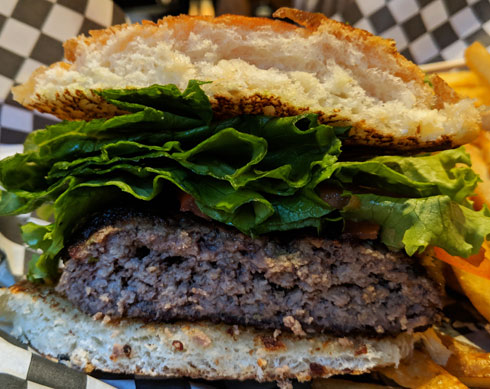 The griddled patty had a decent amount of crust, but it was cooked way past well done, it was too finely ground, and it was just the driest thing in the history of dry.  It was brutal.  The flavour was fine, I guess (it was inoffensive, at least) but it was so incredibly dry that having to actually eat it was such a chore.

The toppings were okay, as was the bun (though it was a bit too dense).  Who cares, though?  That stupid jerk of a patty needs to take a long walk off a short pier.

As for the fries, they were ultra-generic frozen fries.  Because why not, right?  The restaurant’s on a very high-traffic section of Front Street, so I guess it’ll be busy regardless of how the food actually tastes.  So why not serve the most low-effort, cheapest garbage you can find?  People will eat it regardless, apparently!  It’s just good business.  I have a certain amount of grudging respect for that.  I just wish I didn’t have to suffer through eating there myself.

As much as I love the griddle-smashed burgers that are so omnipresent in the GTA, it’s hard to resist a big, fat grilled burger.  But it’s much, much harder to find a really good burger cooked in that style, so when I heard that they serve a tasty one at The Belsize Public House, I was all over it.

They have a couple of burgers on their menu; there’s the Hoser Burger, which features peameal bacon and cheddar, and the no-frills Grilled Burger, which comes topped with lettuce, tomato, and onion.  As I’m wont to do, I went with the simpler of the two.

I’ve cut through so many burgers over the years that I can pretty much tell instantly if a burger is going to be iffy.  This one was suspiciously difficult to saw in half, and the alarm bells were going off in my head.  They were screaming.

As I feared, it wasn’t very good.  The Belsize makes every mistake you can make to end up with an unsatisfying burger.  Literally every single one: the beef was clearly too lean, the texture of the grind was way too fine, the beef had been overhandled and was too tightly packed, and it was cooked all the way to the tippy tippy top of well done (if not a little bit further).  The meat was so dense.  It was a punishingly tough chew.  There was a vague amount of juiciness there, but not even close to enough to make any kind of impact.

The flavour wasn’t much better; aside from the fact that I’m pretty sure they had mixed salt and pepper right into the patty (it was distractingly peppery), the flavour of the beef was almost non-existent.  And what little flavour there was tasted vaguely off.  It wasn’t good.

The toppings were fine, and the fluffy bun was actually pretty perfect.  That patty, though…

I will say that my dining companion had the jerk pork sandwich and really enjoyed it, and the fries and the coleslaw that came with the burger were both quite tasty.  The fries, in particular, were seriously delicious, with an addictively crispy exterior and perfectly creamy interior.  So it’s possible that everything else coming out of the kitchen is tasty.  But they bungled that burger, and they bungled it hard.

Yes, I’ve actually reviewed Marben before, back in 2013.  Back then, they stuffed the patty with saucy braised short ribs, a practice that made me call that burger “less hamburger and more upscale sloppy joe.”

Now that they’ve started serving a more traditional burger with a regular un-stuffed beef patty, I figured a re-do was in order.

I was actually pretty excited to try it again.  The burger is quite well regarded, and now that it’s an actual hamburger instead of an odd Frankenstein creation, I figured it would be delicious.  I was all set for burger greatness.

I guess I should have left well enough alone.  As it turns out, the whole stuffing thing was actually hiding the burger’s deficiencies, which are now in plain view.  To paraphrase the late, great Roger Ebert: I hated hated hated hated hated this burger.  It was so bad.

It’s basically the same burger it was before, but with braised brisket on top instead of short rib in the middle.  From the menu: “beef fat brioche, aged cheddar, branston pickle, braised brisket.” 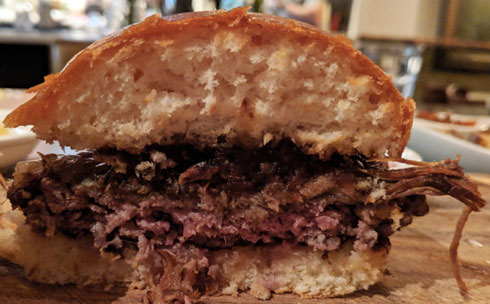 I’m going to cut right to the chase: the patty itself was horrible.  I’ve had a lot of overly dry burgers since starting this blog, and this might have been the most egregiously, ridiculously, unpleasantly Sahara dry.  I don’t think there was an ounce of moisture in it, despite only being cooked to a nice rosy-pink medium.

I don’t know what cut of beef they’re using in this thing, but it’s obviously all wrong.  It’s one of those burgers that’s so dry, as you’re chewing it you’re wondering, “how am I even going to swallow this??”  The waiter must have refiled my water about five times, because I had to keep drinking and drinking and drinking just to keep my mouth from completely drying out.

The beef was also too finely ground; combined with the dryness, the texture was a complete nightmare.  It made me want to hurl the burger across the restaurant, run out, and then never eat or review a hamburger again.

I was wondering if this was just a one-off issue, but the fact that the burger wasn’t even cooked past medium and was still this insanely dry (not to mention the overly fine grind) makes me think that they’re using beef that’s way, way, way too lean and then preparing it poorly.

The flavour was okay, at least — not particularly beefy, but pleasant enough.  But with that texture, it didn’t matter.

Everything else was fine, I guess.  The brisket was okay, but like the patty, it was dry — there will be absolutely no mistaking this version of the burger for a sloppy joe.  The other toppings were good, though the cheddar was so sparingly applied that if I hadn’t seen it, I would have never known it was there.

The bun was dry too, because why the hell not, right??  I’ve had worse, but I think it might have either been slightly overbaked or a day or two past its prime.

The fries were great, though.  So there’s that at least.

196 Plates
Michael Eats
Candyrageous
Up in the Nusair
Tasty Burgers
Blog at WordPress.com.