What do you do if you’re planning on eating a burger before seeing a movie, and the burger joint turns out to be closed? And the backup place, too? If you’re a rational person, you’d say to yourself “Well, I guess I’m not eating a burger today,” and then move on with your life.  If you’re me?  You eat a movie theatre burger.  Because how could that possibly go wrong?

Let’s be honest: I probably shouldn’t be reviewing this.  No one in their right mind would order a hamburger at the movies, and even if they did, they’d do it with the full knowledge that they’re going to get something pretty lousy.  If you order anything other than popcorn, nachos, or candy at the movies, you are fully complicit in the food crimes that follow.

They have a few different burgers on the menu; I went with the simplest one they had, which is a plain cheeseburger topped with ketchup, mayo, mustard, lettuce, and tomato.  That’s a bit heavier on the condiments than I typically like, but in this case I figured the burger would need all the help it could get.

It’s a frozen patty, because of course it’s a frozen patty.  This is one case where I can’t even get mad at a place for taking a taste-compromising shortcut like that.  I mean, is anyone really expecting the pimply-faced teens at the theatre to grind and cook fresh beef?  The fact that they even sell stuff like burgers and chicken sandwiches at a movie theatre is kind of crazy; of course it all comes from a freezer.

Though I’m pretty sure the burger actually started its life as an above average frozen patty, it was held for who-knows-how-long in one of those stupid warming drawers that have pretty much ruined fast food, and was thus completely devoid of anything even resembling moisture.  It was sucked dry, with a salty, off flavour that didn’t even taste vaguely of beef.

The cheese — which was cold and unmelted — actually tasted like real cheddar, with a surprisingly sharp cheesy flavour that helped distract from the generic frozen patty taste.  The lettuce and tomatoes were fine, and the various condiments tried their best to disguise the burger’s flavour.

The bun was the best element here by far. It was soft and fresh, with a slightly sweet flavour and just enough substance to hold up to the burger nicely.

I’m sorry to break this to you, bun: you did great, but you died in vain.

This would normally be the part of the review where I’d talk about the fries.  I decided to spare myself.  I mean, how much awful food are you expecting me to eat for your amusement?  I think the burger is probably enough.

Stupid burgers need the most attention.

Sorry for the random paraphrased Simpsons quote, but I literally cannot hear the name of this place without thinking of that particular line.

It’s certainly an odd name for a restaurant, but if an unusual name is what it takes for a burger joint to be noticed these days, so be it.

I’ll admit it though, my expectations weren’t super high. The only thing I had heard about this place was this lukewarm review from a fellow Toronto burger blogger. Between that and the name, I dialed my expectations way down.

If nothing else, the place is delightfully affordable. Though they have a really extensive menu with all kinds of pre-topped burgers and various patty choices, I went simple with just the regular 6 oz burger. As a combo with fries and a drink, it came up to less than nine bucks with tax. 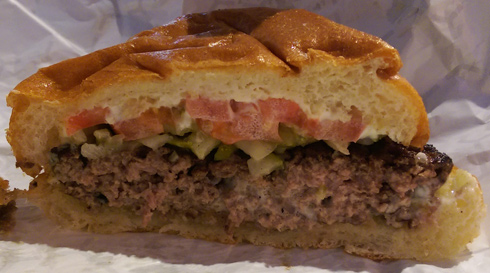 I’m just going to say it then: it’s a really good burger.  Though nothing about it blew me away, it gets pretty much everything right and very little wrong.  It’s griddled, with a decent amount of crust.  It’s nice and juicy despite being cooked to well done.  It’s coarsely ground and not too tightly packed, giving it a really satisfying texture.  It has a mild but very pleasant beefy flavour.  And the fresh, lightly toasted bun suits the patty perfectly.

I really enjoyed it. It’s nothing I’m going to lose my mind over or urge you to go way out of your way to try; it’s just a perfectly executed fast-food-style burger that’s really tasty and satisfying.  Considering the price, you can’t ask for much more than that.

As for the fries, they were seriously tasty, and right on par with the hamburger.

I’ll show myself out. 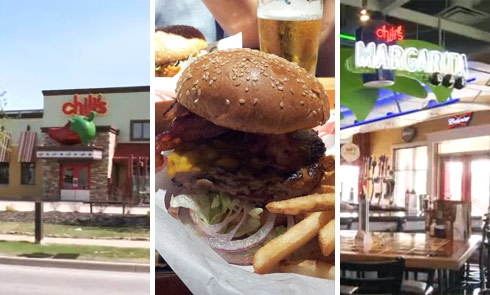 I was actually kind of excited when Chili’s opened here back in 2009.  It was a much darker time for a hamburger lover in the GTA; this was pre-Burger’s Priest, Holy Chuck, and the many other burger joints serving quality smashed and griddle-cooked burgers in Toronto.  It was surprisingly difficult to find a decent hamburger cooked in this style.  Almost impossible.  Like I said, it was a dark time.

Chili’s serves through-and-through American food, and of course, this includes a classic diner-style griddled hamburger.  Or at least, it did.  Now?  Not so much.

But when they first opened here, Chili’s served a pretty decent burger.  It wasn’t anything too great, but this being 2009, a griddled burger made with fresh beef and without any onions or spices mixed in was a rare treat.

Fast forward to now.  At some point, the higher-ups at Chili’s must have taken a look at their Canadian competition — dreck like Boston Pizza, Kelsey’s, and Montana’s — and realized that Canadians have very low standards when it comes to casual chain restaurants.  So they switched over from making their burgers fresh to serving prefabricated frozen hamburgers.

On my most recent visit I ordered the bacon cheeseburger, and it was obvious just looking at it that it was a frozen burger.  It was even more obvious when I tasted it: with its chewy, hot doggy texture and its generically salty, non-beefy flavour, there was absolutely no mistaking it for anything but a frozen patty.  It was pretty bad.

The cheese and bacon were both fine, though they did nothing to disguise the off-putting patty.  The bun, too, was fine (if a bit dense), but again — there is nothing that can disguise that patty.

The burger came with a side of fries that were perfectly okay, but a bit ho-hum.

To me, the unfortunate changeover from fresh to frozen burgers sends a fairly clear message to Canadians.  Chili’s is basically saying “Yeah, we could spend a little bit extra and make our hamburgers with fresh beef, like we used to.  But you people will eat whatever garbage we put in front of you, so why should we?”  And when you look around at the casual chain restaurant landscape, they might just be right.  We will eat whatever garbage they put in front of us; there’s just no other way to explain the baffling success of the execrable Boston Pizza, among others.

(Images of the inside and outside of the restaurant above captured from this video on YouTube. For some reason it completely slipped my mind to take these pictures myself.  Whoops!)