I’ve been at this for almost a decade now, so for the most part, these reviews basically write themselves (what’s that?  The reviews all feel like I’m writing them on autopilot? Yeah, that’s fair).  But burgers like the one they serve at St. James’s Gate — good, but not noteworthy in any way — are probably the toughest to review.

It’s a solid burger.  It exists.  There’s nothing majorly wrong with it.  I don’t know.

The Royale with Cheese, according to the menu: “Twin four ounce brisket burgers stacked with melted American cheese, Havarti, secret sauce and bread and butter pickles.”

I will say that the two types of cheese are a nice touch; I’ve never seen the Havarti/American combo on a cheeseburger, and I was skeptical.  I thought it might be too much.  But they’re both nice and gooey without being overly assertive.  It works.

Another bonus: I’m pretty sure that the patties were grilled, which is a nice change of pace from the griddle-smashed patties that you’d expect to find in a burger like this. 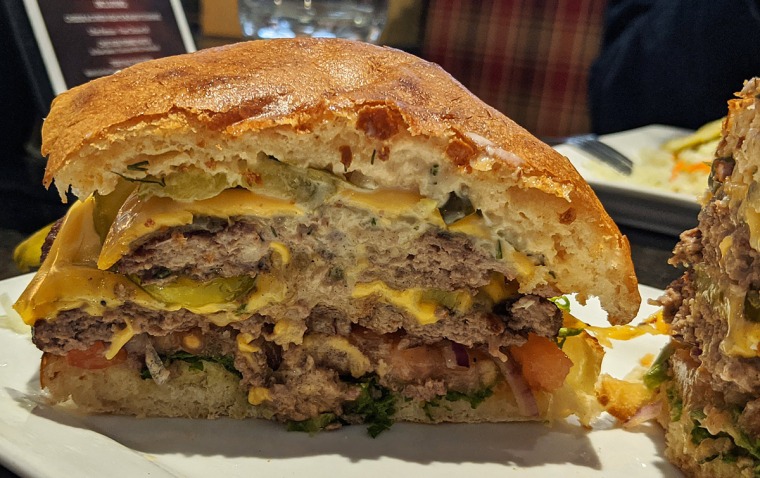 Otherwise, the patties are fine.  They’re slightly too dense and tough, but they’re nice and juicy, which helps to balance things out.  And while there’s nothing particularly noteworthy about the flavour of the beef, it’s fine.  It’s inoffensive, and there’s so much other stuff going on here that it doesn’t really stand out as a huge issue.

The other toppings, including the tangy secret sauce, are all about what you’d expect, and the bun — though slightly too toasty and crispy — suits the burger well.

As for the fries, they’re quite good.  Unlike the burger, they’re actually quite a bit better than okay. 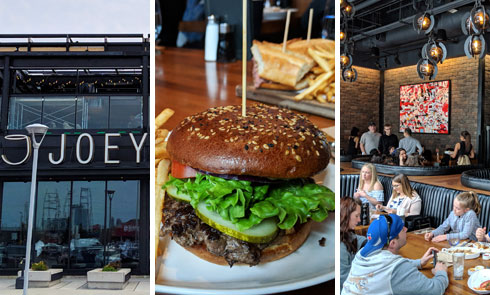 Are the days of seriously mediocre and/or terrible casual chain restaurants behind us?  Up until recently, the burger at a place like this was pretty much guaranteed to either be dry and unpleasant, or rubbery and industrially-produced.

But the burger I had at State & Main a couple of months ago was surprisingly okay, and so was the one I just ate at Joey.  Things are clearly looking up.

The burger here isn’t anything to get too excited about — nothing about it stands out, but it’s a solid, inoffensive hamburger. 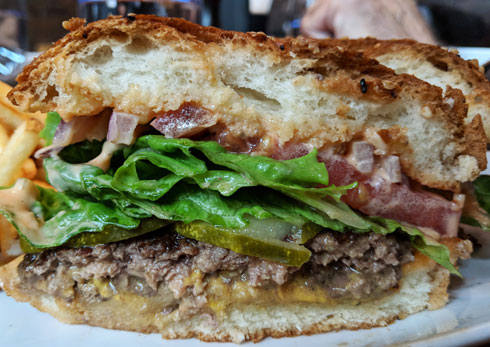 I was quite enjoying the first few bites — the medium-well middle is juicy and satisfying.  But the meat is too tightly packed, and as you get closer to the well done edges of the patty, it gets dry and tough.

Still, it’s not bad.  The griddled patty has a good amount of crust on its exterior, and while it doesn’t taste particularly beefy, the flavour isn’t unpleasant.

The toppings are all fresh and tasty, and the zesty mayo adds some zip without overwhelming the beef.

The bun’s not great, however.  It’s overly dense and dry, and it’s slightly too wide for the patty.  The beef-to-bun ratio is off.

As for the fries, they tasted like a slightly inferior version of what they serve at McDonald’s. 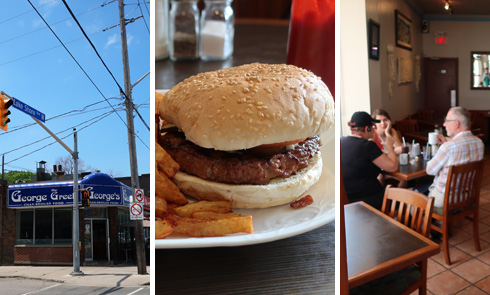 So, it turns out it’s actually not a great idea to go to a restaurant based on one post from some random guy on a message board. Who knew! (What? That’s just common sense? Literally everyone knew that? Hmm.)

George the Greek is one of those really old school places that has two types of burgers on the menu: a cheap hamburger (i.e. a bottom-of-the-barrel frozen patty) and a more expensive “homeburger” (which, logic dictates, is one that they make themselves).

I ordered the homeburger, only to find that George the Greek has pulled a C & Dubbs — it’s also a frozen burger. It’s one of the thicker, premium varieties of frozen burger, but a frozen burger is a frozen burger: rubbery hot dog texture with a mildly unpleasant, salty, off-meat flavour.

If you could see me right now, you’d see that I’m giving a very vigorous thumbs down while making a farting noise.

The burger had a pleasant, mild smoky flavour from the grill, and the toppings were fine (I went with pickles, tomato and mayo — and the mayo was actually mayo, not Miracle Whip, which a frequent and unwelcome substitution at old school joints like this. So that was nice.).  The bun was pretty good too — it was standard supermarket fare, but it suited the burger quite well.

Alas, there isn’t much you can do to make a lousy patty like this particularly palatable.

As for the fries, they were slightly better than the hamburger, but they were a bit undercooked and completely unseasoned.

Super Burger pretty much follows the old school burger joint playbook to a T. Grilled burgers? Check. Run-down decor? Check. Both frozen and homemade burgers on the menu? Check. A choice of toppings from behind glass? Check. Meatloaf burger? Ch… wait, what? They don’t serve a meatloaf burger?

The lack of meatloafyness makes Super Burger a bit of an oddity among older burger joints, but I’m certainly not complaining. Read this blog for a while and it’ll become pretty clear that I think the seasoning should go outside of a burger. And of course, the aforementioned seasoning should be salt and maybe pepper and that’s it.

No, I’m not going to get into yet another rant about the perils of meatloafery in the burger world, especially since this place doesn’t even commit that particular food crime. 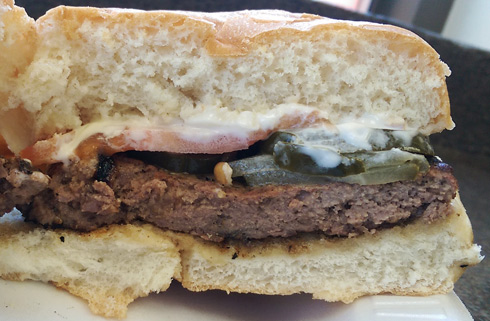 But yes, they do have the choice between frozen and homemade, and yes, of course I went with homemade. I ordered the five ounce, and got it topped with pickles, tomato, and mayo.

Alas, despite the fact that it was fresh and un-meatloafified, it just wasn’t particularly good. The middling quality beef had almost zero flavour, with almost all of the taste coming from the vaguely bitter smokiness that you get from a patty that’s been on the grill for a really long time.

The texture, too, wasn’t great; the patty had an overly fine grind and an almost complete lack of juiciness, which resulted in a bit of a mealy chew.

The lightly toasted bun was mostly okay, but probably about a day past its shelf life, and the toppings were fine (the mayo was actually mayo and not Miracle Whip — another oddity for an old school burger joint).

As for the fries, they were of the battered frozen variety. Forgettable, but with enough of a crispy/creamy contrast to be quite edible.

After a few years of success in their original Oakville location (including being featured on the Canadian photocopy of Diners, Drive-ins and Dives, You Gotta Eat Here), Stoney’s Bread Company is expanding.  I’ve been to the original location a few times and quite enjoyed it, so I was obviously pretty happy to hear they were coming a bit closer to home.

I didn’t even realize they had a burger.  I went because I wanted to check out the new location, but then I saw the hamburger on the menu and it was game over.  Do I want a burger?  Yes.  The answer to that question is always yes.

The burger is not-so-descriptively described on the menu as a “house made 6 oz. premium beef burger.”  I guess the toppings aren’t set in stone.

The version I got, at least, is definitely a kitchen sink burger.   Between the generous pile of sweet caramelized onions, the salty bacon, the sharp cheddar cheese, and all the other toppings (lettuce, pickles, and some kind of mayo I think), there’s a lot going on here.  It’s a bit of a mess.  A tasty mess, but a mess regardless.

Sadly, it’s not the beefiest tasting burger ever.  In fact, I’d say there’s pretty much zero beefy flavour here, though this is the type of burger that’s so voluminously topped that the patty itself is almost just a vehicle for the toppings.  It’s also a meatloaf burger, with stuff mixed into the patty — but again, the hamburger is so topping-heavy that it barely makes a difference either way.

But yes, it is tasty.  I’ve had kitchen sink burgers where the toppings seem willy-nilly and the flavours never really cohere in any meaningful way, but here it all works: the saltiness of the cheddar and bacon is offset by the sweetness of the onions, and the richness of it all is cut by vinegary bite of the pickles.

The patty is almost an afterthought in this medley of flavours, but it’s substantial enough that it isn’t entirely drowned out.  it is, however, a bit on the mushy side (a frequent issue with meatloaf burgers), but thankfully this isn’t nearly as egregious as it can sometimes be.  It’s also a bit too finely ground, but the texture of the patty is otherwise mostly where it should be, with a decent amount of juiciness despite being cooked to well done.

The bun was okay; it was substantial enough to (mostly) hold up to the extremely messy burger, but it was untoasted and cold.  Not room temperature; cold, like it had been kept in the fridge.  That was a bit unpleasant, but the rest of the burger quickly warmed it up.

I will say that unless you’re seriously in the mood for a burger, it’s not what I’d order here.  I’ve also had a couple of the sandwiches and the pizzas, and though I liked the burger, it was the weakest thing I’ve tried.  The slow-roasted lamb sandwich in particular was quite delicious.

The burger comes with a side of baked potato wedges, and some kind of spicy mayo to dip them in.  They were fine: well cooked, but nothing to write home about.