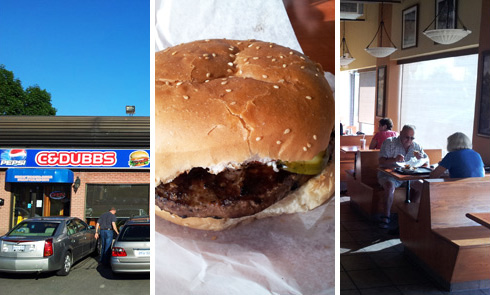 I knew it was a bad sign when, while taking my order, the rotund man behind the register grabbed a handful of his apron, brought it to his mouth and let loose a hacky cough.  To be fair, I do not believe that this man was handling any food (though he did pour the soft drinks).  Still, that’s not something that you want to see.

It was another bad sign when my dining companion asked for mayonnaise on the side and was informed that this would cost him fifty cents.  Really?  You’re going to charge fifty cents to pour mayonnaise into a tiny cup instead of onto a burger?

Neither of these points have much to do with the quality of the food, but they do illustrate a certain attitude that I think is reflected in the lack of care that C & Dubbs puts into their menu.

The restaurant offers a hamburger and an eight ounce homeburger.  I ordered the latter item, thinking that this might just be the better of the two.  I sat down, waited about five minutes for the burgers to be ready, then picked out my toppings from behind the glass.  As usual, I went with pickles, tomato and mayo. 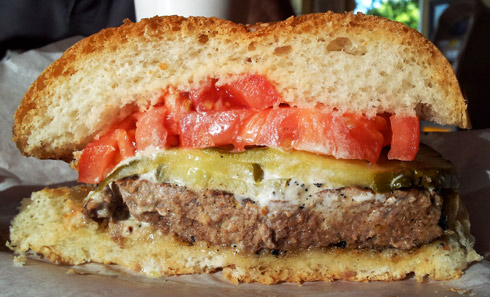 Though the burger, labeled a “homeburger,” is presumably homemade (or at least they’d like you to think that it is by sticking the word “home” in the name), it sure doesn’t taste that way.  If this is a homemade burger, then they have done an absolutely superb job at mimicking the taste and texture of a frozen patty.

I strongly suspect that it is frozen.

It’s not even a particularly good frozen burger, even by the dubious standards of an industrially-produced patty.  The taste is devoid of anything even remotely resembling beefiness, with a nebulous, vaguely unpleasant flavour that I’m honestly having a hard time describing.  It’s not very strongly spiced, which is normally a good thing, but here it just means that there’s not much else to hide the off-putting mystery-meat flavour.

It also has that spongy, sausagey texture that you associate with frozen burgers — but worse than usual, if you can believe it.  The texture is strongly analogous to that of a hot dog; in fact, the whole thing bore more than a passing resemblance to a less salty version of a hot dog, which is just as unappealing as it sounds.

Based solely on the taste and texture, this could have been emu meat and I don’t think it would have made much of a difference.  Any taste or texture that this beef once had has long since been pulverized out of it.

The bun was fresh and complimented the burger well, and the toppings were fine.  But even the best bun and the highest-quality toppings cannot overcome such a horrible patty.

The fries, though unsalted and a bit on the soggy side, were reasonably crispy, with a really creamy interior and  a nice flavour.  They were quite greasy, but not overwhelmingly so.  I think it goes without saying that they were the highlight of the meal.

UPDATE: To satisfy my curiosity, I decided to call up the restaurant and find out if they actually make any of their burgers in-house.  “We don’t do that,” the man replied. “They’re frozen.”  Can’t say I’m surprised.