I must have driven by Burger Fighter a few dozen times, but I never gave it a second thought until it was featured on the @zachdoesburgers Instagram account (you should probably be following him, along with @burgerlab_to if you like burgers and you’re on Instagram).

Burger Fighter is an extremely unassuming hamburger/shawarma restaurant, so it’s easy enough to assume the burger is going to be lousy (Nader’s Middle Eastern Grill & Bakery in Mississauga comes to mind).

The burger is not lousy.  It’s actually quite good!  Not only that, it’s ridiculously inexpensive — I ordered the lunch special, which comes with a cheeseburger, a generous amount of fries, and a drink for $7.99.  Even McDonald’s isn’t that cheap.  That’s nuts.

And it’s a good quality burger.  It’s certainly not the best cheeseburger I’ve ever had — the flavour could have been a bit beefier, I wish there were more crust from the griddle, and the American cheese wasn’t quite as gooey as it should have been.  But the grind is nice and coarse, it hasn’t been overhandled, and it’s quite juicy despite being cooked all the way to well done.

It has a pleasant (if somewhat mild) beefy flavour that’s sadly obscured by the many toppings (they globbed on an obscene amount of ketchup and mayo, along with the usual lettuce, tomato, and pickles).

The bun, too, could have been better; it was a bit too dense and much too big for the patty, resulting in a bun-to-beef ratio that’s way off.

But for the price, and for how unimpressive the place looks from the outside, it’s a shockingly good burger.  I actually quite enjoyed it, and the fries were downright excellent.

Sometimes, you just wanna stop eating your burger, slap your hand on the table, walk back into the kitchen and shake everybody’s hand.  Sometimes a burger is so delightfully great that it just makes you want to do something.  Especially when you’re in a place that doesn’t even specialize in hamburgers, and the burger’s greatness is all the more improbable.  A great burger from a random sandwich shop?  That just makes my day.

It’s an amazing example of a classic, no-frills fast-food-style burger executed perfectly.  You’ve got the gooey American cheese, the crusty griddled patties, the Big-Mac-esque secret sauce, the sesame seed bun, and the classic veggies.  It’s all there.

Those patties are top notch; the flavour could have been a bit beefier, but it’s hard to complain too much when all of the other elements are right where they should be.  They were also ever-so-slightly too densely packed, but again, it’s hard to complain too much when the overall package is so damn satisfying.  The patties are cooked to a perfect medium rare with a nice layer of dark brown crust on the exterior.  They’re also super juicy; that alone is reason enough to celebrate.

The melty American cheese adds creaminess and a nice salty tang; I kinda wish that there was only one slice instead of two, as I feel like two slices of cheese on a double cheeseburger starts to overwhelm the meat, but that’s more of a personal preference than anything else.  Two slices is the standard, so it’s hard to fault them for that.

The tangy secret sauce is pretty much exactly what you think it’s going to be — it works great with the cheeseburger and, more importantly, it doesn’t get in the way.

Even the bun was surprisingly great: soft, fresh, and perfectly toasted, it somehow manages to stand up to that very juicy, messy burger without ever feeling overly substantial.  The beef to bun ratio?  On point.

As for the fries, they were crispy, creamy, and flavourful; as great as the burger was, the fries might have been even better.

I wasn’t crazy about the Skyline Restaurant on my first visit, but that was before the recent change in ownership; I figured another try was probably in order.

My first impression was how delightfully cheap the burger is; for twelve bucks with a hefty side of fries, it’s very much on the low end of what you’d expect to pay from a restaurant like this in Toronto.

It’s a no-frills hamburger, topped with lettuce, tomato, pickles, onion, and mayo.  The waitress asked if medium was okay; it was.  And the grilled patty was indeed cooked to a perfect medium, with a rosy pink interior.

Griddled burgers are so ubiquitous in this city that a grilled burger is almost a novelty these days.  I like a griddled burger as much as the next guy, but cooking a hamburger patty on a grill gives it a bit of a smoky flavour and a unique character, so it’s always nice to have that option.

It’s especially nice when the burger is as good as it is here; with its satisfying punch of beefy flavour, it’s very obvious that they’re using above-average beef.  It’s not the juiciest burger that I’ve ever had, but it’s very far from dry, and the texture was about 95% where it should be (it was just a bit too finely ground, making it ever-so-slightly tougher than it needed to be, but that’s a very minor complaint).

The toppings were mostly quite good, though the very thickly-sliced tomato was a bit mealy.  And the soft, fresh bun — lightly toasted — suited the burger well.

As for the fries, they were amazing.  Perfectly crisp and perfectly tender, with just the right amount of salt — very close to fry perfection. 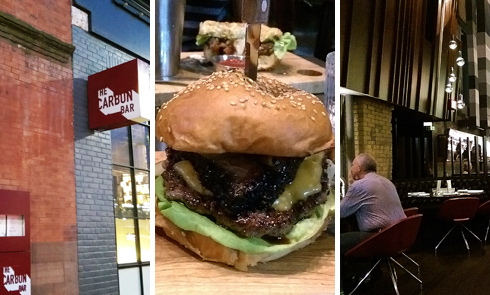 I’ve been pretty anxious to check out The Carbon Bar ever since I watched this drool-inducing video; if you can watch that and not want to immediately hop into the nearest car, subway, or bus to get to The Carbon Bar, you’re clearly made of stronger stuff than I am.

The Carbon Bar is primarily a barbecue joint — albeit an upscale one, with prices to match — and has a burger that definitely fits the theme.  Specifically, it’s topped with a fat slice of smoky brisket (along with American cheese, charred and pickled chili peppers, lettuce, pickles, and burnt onion aioli).

It’s really tasty.  The patty has an impressive amount of crust from the griddle and is cooked to a nice pink medium rare — it’s clearly above average.  It had a really good texture, and in the bites I got of the patty alone, a rich, satisfying flavour that you only get from great quality beef.

But there’s a lot going on here.  The patty, as great as it is, feels like a supporting player in its own hamburger.

The generous slice of smoked brisket — probably about the thickness of the patty itself, if not a bit thicker — is the dominant flavour here.  I mean, I’m not really complaining; the brisket was amazingly tender, unctuously fatty, impressively smoky, and had a generous amount of seriously tasty bark.  It was easily the best BBQ brisket I’ve had in Toronto.  But the burger tastes more like a brisket sandwich with a burger patty than a hamburger with brisket.

The cheese, too, was stronger than it needed to be.  The menu calls it American cheese, but it definitely had the taste and texture of regular cheddar (and a fairly sharp one at that).  It was a bit overpowering.

The other toppings were all pretty great, particularly the charred and pickled chili peppers — they do an amazing job of cutting the richness of the patty, the brisket, and the cheese.  The sweet, fresh brioche bun was nearly perfect, though it did lose structural integrity towards the end (I had to eat the last few bites of the burger with a fork and knife).

Still, whatever faults I have as a burger purist — I really wish I could taste the patty a bit better, since it was clearly pretty amazing — there’s no question that what they’re serving here is delicious. 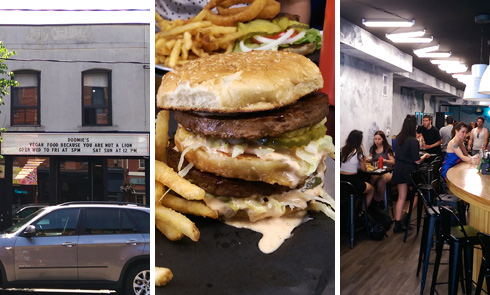 I honestly never thought that I’d be reviewing a veggie burger for this blog.  I mean, I try my best to avoid reviewing hamburgers made with any meat other than beef, so a veggie burger seemed completely out of the question.

Then I saw some pictures of the Big Mac clone at Doomie’s.  I kind of had to try it.

For the unaware, Doomie’s is an L.A. export whose M.O. is serving vegan versions of over-the-top junk food like chili cheese fries, chimichangas,  and of course, hamburgers.  “Vegan” and “health food” tend to go hand in hand, but I’m sure even vegans want to eat deep-fried junk every now and then.

I feel like I need to preface this review by saying that I went into Doomie’s with a completely open mind.  I realize that I’m a bit of a burger snob, but good food is good food.  If the veggie burger here were delicious, I’d be more than happy to sing its praises.

That being said?  This might be one of the worst hamburgers that I’ve had in my entire life.

I ordered the Big Mac clone, which isn’t technically on the menu.  The waitress jokingly pointed out that any resemblance to that particular burger is purely coincidental (since no one wants to incur the wrath of ol’ Ronald’s lawyers).  But it’s available if you ask for it. 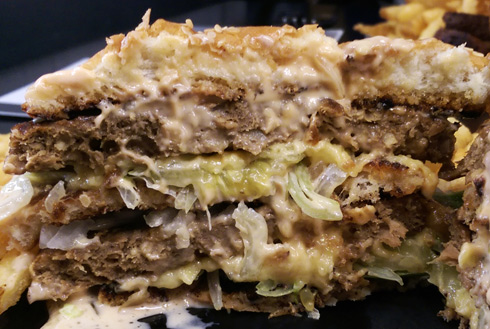 It looks impressive, I’ll give it that. Aside from the fact that the watery sauce was leaking from the burger like blood from a gut-shot corpse, it looked impressively like the real deal.

Eating it was a challenge.  I’m not sure why the sauce was so thin, but it completely soaked through the bun and made the burger impossible to eat without a handful of napkins.  And the parts of the bun that weren’t soaked through with sauce?  They were either suffused with grease, or sogged up by mushy cheese (yes, mushy cheese — more on that in a bit).

Of course, eating this burger was also a challenge because of how gross it was.  I mean, let’s not beat around the bush.

Those veggie patties are going to haunt my dreams.  I just don’t think that food science is able to accurately replicate the taste and texture of beef.  If you’re going to serve a veggie burger, your best bet is to not even try, and just serve something in a patty shape that tastes good.

The veggie patties here have somehow managed to take everything I hate about frozen burgers, and magnified it tenfold.  That rubbery, vaguely hot-dog-like texture you get from really cheap frozen patties is here in spades, but where this patty goes horribly wrong is the flavour.  It just tastes off to a degree that’s downright surprising.  I don’t even know if I can describe that flavour, other than to say that it tastes like you left a frozen patty out in the sun until it turned suitably rancid.  It was flat-out disgusting.

Then there’s the cheese, which — though it actually tastes close enough to the type of processed cheese you’d find on a Big Mac — has that aforementioned mushy texture.  Imagine taking shredded up tissues and soaking them with cheese-flavoured water, and you’ve got a pretty good idea of what to expect.

The other toppings were all fine, aside from the watery sauce (which, to be fair, tasted pretty close to the real thing).  But when your burger features two patties as foul as these on unpleasantly sodden bread, the toppings are completely irrelevant.

As for the fries, they were battered — not my favourite — but for that style of fry, they were pretty good.

196 Plates
Michael Eats
Candyrageous
Up in the Nusair
Tasty Burgers
Blog at WordPress.com.