I must have driven by Burger Fighter a few dozen times, but I never gave it a second thought until it was featured on the @zachdoesburgers Instagram account (you should probably be following him, along with @burgerlab_to if you like burgers and you’re on Instagram).

Burger Fighter is an extremely unassuming hamburger/shawarma restaurant, so it’s easy enough to assume the burger is going to be lousy (Nader’s Middle Eastern Grill & Bakery in Mississauga comes to mind).

The burger is not lousy.  It’s actually quite good!  Not only that, it’s ridiculously inexpensive — I ordered the lunch special, which comes with a cheeseburger, a generous amount of fries, and a drink for $7.99.  Even McDonald’s isn’t that cheap.  That’s nuts.

And it’s a good quality burger.  It’s certainly not the best cheeseburger I’ve ever had — the flavour could have been a bit beefier, I wish there were more crust from the griddle, and the American cheese wasn’t quite as gooey as it should have been.  But the grind is nice and coarse, it hasn’t been overhandled, and it’s quite juicy despite being cooked all the way to well done.

It has a pleasant (if somewhat mild) beefy flavour that’s sadly obscured by the many toppings (they globbed on an obscene amount of ketchup and mayo, along with the usual lettuce, tomato, and pickles).

The bun, too, could have been better; it was a bit too dense and much too big for the patty, resulting in a bun-to-beef ratio that’s way off.

But for the price, and for how unimpressive the place looks from the outside, it’s a shockingly good burger.  I actually quite enjoyed it, and the fries were downright excellent. 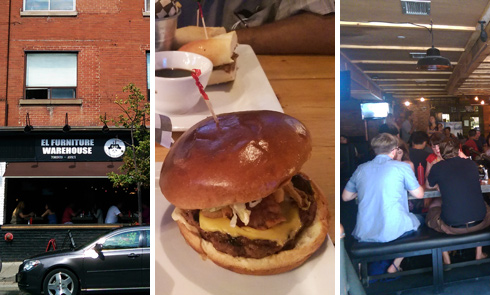 In case you’re not familiar with the place, El Furniture Warehouse’s whole shtick is that every item on the menu costs five bucks (or more accurately, $4.95).  Yes, all the appetizers, mains, and desserts are five bucks.

As you can imagine, it’s a popular place — I went on a Saturday afternoon, and it was pretty much packed.  The vibe seemed a little bit forced, like they were trying really, really hard to be hip, including a purposely unfinished design with a hodgepodge of ephemera on the walls, servers with piercings and tattoos aplenty, and the requisite uncomfortably loud music (how much of a curmudgeon do I sound like right now?).

As for the food?  Surprisingly enough, it’s not horrible.

It’s not particularly good, mind you — but considering what they charge, it could have been a whole lot worse (it certainly doesn’t seem to be any worse than a place like Kelsey’s or Boston Pizza, where the prices are double if not triple what they’re charging here).

I’m not sure the quality of the food even matters at these prices, but I’ll note that the burger is frozen and industrially produced.  The patties are a bit higher quality than usual (similar to what they serve at Zet’s), so that’s good at least.  It’s not quite as hot-doggy as some, and actually does have some vague beef flavour.  Still, no one will be confusing it for anything but what it is: a cheapo burger that can claim to be edible, but not much more.

There are three burgers on the menu, but the waitress helpfully pointed me in the direction of The Works, their signature hamburger: “maple bacon, cheddar, crispy onion strings, macho sauce, shredded lettuce and tomato on a toasted Brioche bun.”

The toppings were all actually pretty decent — the macho sauce was some kind of garlic mayo, and everything else was pretty good, including the fresh, slightly sweet brioche bun.  With a better patty it could have actually been not bad, but that patty does bring the whole thing down several pegs.

Still, for five bucks including fries (i.e. cheaper than fast food), it might be worth a vague recommendation, provided you know what you’re getting into.

It shouldn’t come as much of a surprise, however, to hear that the fries also aren’t that great; like the burger, they obviously originated in a factory many, many miles away, followed by a long stay in a freezer.  They’re pretty bland, but again, I’ve had worse.