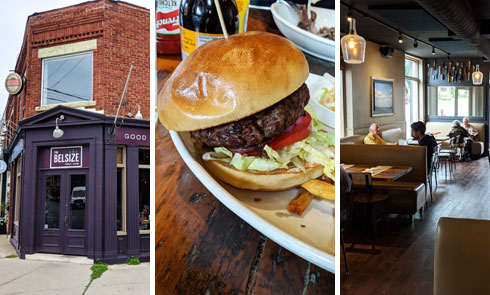 As much as I love the griddle-smashed burgers that are so omnipresent in the GTA, it’s hard to resist a big, fat grilled burger.  But it’s much, much harder to find a really good burger cooked in that style, so when I heard that they serve a tasty one at The Belsize Public House, I was all over it.

They have a couple of burgers on their menu; there’s the Hoser Burger, which features peameal bacon and cheddar, and the no-frills Grilled Burger, which comes topped with lettuce, tomato, and onion.  As I’m wont to do, I went with the simpler of the two.

I’ve cut through so many burgers over the years that I can pretty much tell instantly if a burger is going to be iffy.  This one was suspiciously difficult to saw in half, and the alarm bells were going off in my head.  They were screaming. 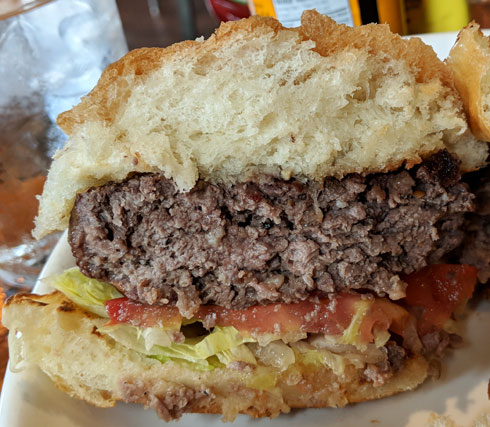 As I feared, it wasn’t very good.  The Belsize makes every mistake you can make to end up with an unsatisfying burger.  Literally every single one: the beef was clearly too lean, the texture of the grind was way too fine, the beef had been overhandled and was too tightly packed, and it was cooked all the way to the tippy tippy top of well done (if not a little bit further).  The meat was so dense.  It was a punishingly tough chew.  There was a vague amount of juiciness there, but not even close to enough to make any kind of impact.

The flavour wasn’t much better; aside from the fact that I’m pretty sure they had mixed salt and pepper right into the patty (it was distractingly peppery), the flavour of the beef was almost non-existent.  And what little flavour there was tasted vaguely off.  It wasn’t good.

The toppings were fine, and the fluffy bun was actually pretty perfect.  That patty, though…

I will say that my dining companion had the jerk pork sandwich and really enjoyed it, and the fries and the coleslaw that came with the burger were both quite tasty.  The fries, in particular, were seriously delicious, with an addictively crispy exterior and perfectly creamy interior.  So it’s possible that everything else coming out of the kitchen is tasty.  But they bungled that burger, and they bungled it hard.