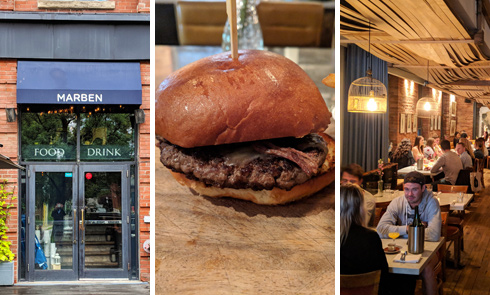 Yes, I’ve actually reviewed Marben before, back in 2013.  Back then, they stuffed the patty with saucy braised short ribs, a practice that made me call that burger “less hamburger and more upscale sloppy joe.”

Now that they’ve started serving a more traditional burger with a regular un-stuffed beef patty, I figured a re-do was in order.

I was actually pretty excited to try it again.  The burger is quite well regarded, and now that it’s an actual hamburger instead of an odd Frankenstein creation, I figured it would be delicious.  I was all set for burger greatness.

I guess I should have left well enough alone.  As it turns out, the whole stuffing thing was actually hiding the burger’s deficiencies, which are now in plain view.  To paraphrase the late, great Roger Ebert: I hated hated hated hated hated this burger.  It was so bad.

It’s basically the same burger it was before, but with braised brisket on top instead of short rib in the middle.  From the menu: “beef fat brioche, aged cheddar, branston pickle, braised brisket.”

I’m going to cut right to the chase: the patty itself was horrible.  I’ve had a lot of overly dry burgers since starting this blog, and this might have been the most egregiously, ridiculously, unpleasantly Sahara dry.  I don’t think there was an ounce of moisture in it, despite only being cooked to a nice rosy-pink medium.

I don’t know what cut of beef they’re using in this thing, but it’s obviously all wrong.  It’s one of those burgers that’s so dry, as you’re chewing it you’re wondering, “how am I even going to swallow this??”  The waiter must have refiled my water about five times, because I had to keep drinking and drinking and drinking just to keep my mouth from completely drying out.

The beef was also too finely ground; combined with the dryness, the texture was a complete nightmare.  It made me want to hurl the burger across the restaurant, run out, and then never eat or review a hamburger again.

I was wondering if this was just a one-off issue, but the fact that the burger wasn’t even cooked past medium and was still this insanely dry (not to mention the overly fine grind) makes me think that they’re using beef that’s way, way, way too lean and then preparing it poorly.

The flavour was okay, at least — not particularly beefy, but pleasant enough.  But with that texture, it didn’t matter.

Everything else was fine, I guess.  The brisket was okay, but like the patty, it was dry — there will be absolutely no mistaking this version of the burger for a sloppy joe.  The other toppings were good, though the cheddar was so sparingly applied that if I hadn’t seen it, I would have never known it was there.

The bun was dry too, because why the hell not, right??  I’ve had worse, but I think it might have either been slightly overbaked or a day or two past its prime.

The fries were great, though.  So there’s that at least.