Baffling.  That’s the only word that comes to mind in response to Hero Burgers’ expansion and continued success.  I’ve been meaning to review this local chain for a while now, but I’ve been putting it off because I had it a couple of times a few years ago, and I remembered it being pretty bad.

“Pretty bad,” as it turns out, doesn’t even begin to describe the horrors of what they serve at this place.

I visited the location in the Sherway Gardens food court (and if you ever find yourself here, The Construction Site — a grilled cheese place — is a bit over-priced but pretty darn tasty).  They have a four ounce, a six ounce, and an eight ounce hamburger.  Knowing that I would probably want as little of this burger as possible, I went with the four ounce.  I selected my toppings (pickles, tomato, and Hero Certified Sauce), received a number, and waited.  A few minutes later I had my tray and took a seat.

The first thing I noticed is how odd the patty looks; pallid and wrinkly, it’s clear just looking at it that it’s a frozen burger.  It looks like the most unappealing frozen burger you’ve ever seen, only with its deficiencies multiplied ten-fold. 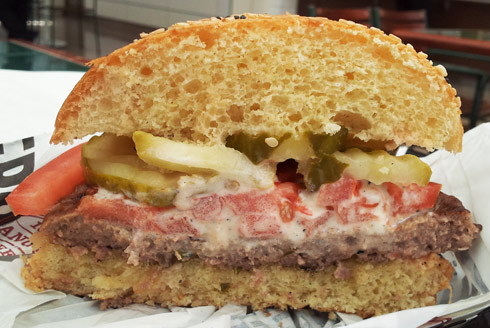 I cut the burger in half, and again, it was obvious that something was amiss.  Thanks to this blog I’ve cut through quite a few burgers, and I’ve never felt anything like this; it was rubbery and tough, like trying to cut through a piece of calamari.  Any idea that I might be pleasantly surprised was completely out the window at this point.  Even still, I was unprepared.  I took a bite and grimaced.

It’s the worst burger I’ve ever had.

I’ll say that again, because it bears repeating: it is quite literally the worst hamburger I’ve ever had in my entire life, and I say that as someone who has eaten a lot of burgers in his lifetime.

I’m not even sure where to start.  The texture, I suppose.  It was horrific.  Chewy and rubbery in the worst way imaginable, it was completely alien from anything even remotely resembling real, fresh beef.  All frozen burgers suffer from some degree of chewiness, but never this bad.  It was disgusting, to be perfectly blunt.

Then there was the taste.  Zero beefiness, and not even much saltiness — not much of anything, other than a rancid, turned-meat flavour.  My dining companion took a bite and described it as fishy, and I can’t say I particularly disagree.  Again: disgusting.

Seriously, take a closer look at this burger: 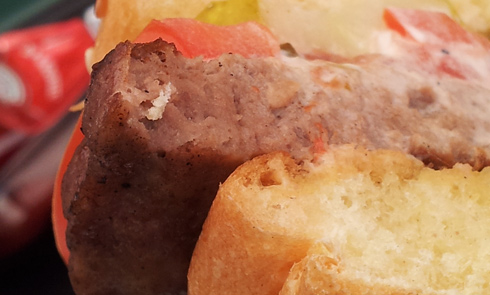 That is not how ground beef is supposed to look.

The toppings were fine, and the bun was a little bit too dense but mostly fine, but it’s all completely moot; this burger could have featured the greatest, most delicious bun and toppings of all time and it still would have been a complete wash.  I was hungry, and for the first time in the history of this blog (and in my life, I’m pretty sure) I couldn’t finish my hamburger.  I didn’t want to finish it.  It was so gross.

I honestly didn’t believe it was possible for a burger to be this bad.  When I was able (and willing) to eat the entire burger from BBQ Express, I assumed that there would simply never be a burger so bad that I couldn’t finish it.  I assumed that even the worst burger in the world had some nugget of desirability, some small appeal, even if only in its deepest reaches.

I was wrong.  There is nothing appealing about the burger at Hero Certified Burgers.   It is where dreams go to die.  It is a shriveled disc of pure despair, from which all hope is forever lost.  If there is a hell, then it is what they serve there, all the time, no exceptions.

It’s bad, basically.  Inedible.  It should be avoided under all circumstances.

Not that it matters, because you should never go to this place for any reason ever, but the fries were pretty good.  They were crispy on the outside and nicely fluffy on the inside, though it’s obvious that they prepare the fries in the same oil that they use for the onion rings — oil which hasn’t been changed in a long, long time.  How am I so sure?  The fries tasted like onion rings.  Not just a little bit like onion rings; blatantly so.  It was bizarre, but surprisingly tasty (though since it is merely the result of Hero Burgers’ incompetence — seriously, change the oil every now and then — I can’t even give them credit for it).