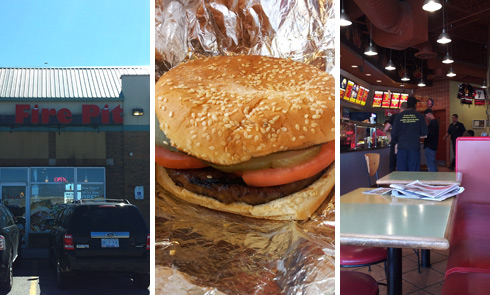 Hoping to find a decent burger near my work, I decided to check out Yelp’s list of the best hamburgers in Mississauga. Number one on this list? The Fire Pit.

I found it troublesome that number two is C & Dubbs (a.k.a. one of the worst burgers I’ve had since starting this blog) — obviously the whole list needs to be taken with a fairly enormous grain of salt. Regardless, I decided to check out Yelp’s number one burger.

It’s a Greek place; the tendency at restaurants like this is to serve a meatloaf style burger with all kinds of spices mixed in, which is what I braced myself for.

As it turns out, I would have been lucky to get a meatloaf burger.

The Fire Pit has a very similar vibe to many old-school places like this in the GTA, with reddish-brown decor, the menu lit up behind the register, and a selection of toppings to pick from behind glass. I went with my usual mayo, tomato, and pickle.

Before I lay into the place, I will say that, at the very least, it’s cheap. I got the quarter pound burger as a combo, and it came up to less than nine bucks with tax. This is, by Toronto standards at least, delightfully cheap.

Of course, there’s a reason it’s cheap. It’s a frozen, industrially-produced patty, and a particularly shoddy one at that. It tastes like a flattened hot dog, basically. It’s not the worst thing I’ve ever eaten, but if you put this and a real hamburger side-by-side in a blind taste test, I don’t think the taster would even realize they’re supposed to be the same thing. It just doesn’t taste like a hamburger. Blech.

The toasted sesame seed bun was fine, though the tomatoes were mealy and the “mayo” was Miracle Whip or some similarly sweet mayo-like substance.

I looked up The Fire Pit on Chowhound before checking it out, and found only one quick mention of the place, in a thread dedicated to the city’s best onion rings. I figured it wouldn’t hurt to mix things up, and ordered onion rings instead of fries.

I generally prefer breaded to battered onion rings, though battered ones can be okay if the batter is thin and crispy, with a well-cooked onion inside. These featured a thick, overly-substantial layer of batter encasing onions that immediately pulled out of the ring, leaving you with a doughy, useless husk. I only felt the need to eat a couple before tossing the rest in the garbage.

2 thoughts on “The Fire Pit”