Whenever I go to a little hole-in-the-wall place that I’ve never heard of, I get a little bit excited; could this be a great new discovery?  A hidden gem?  A place I’ll excitedly recommend to everyone I know?

Spoiler alert: this was not one of those places.

Walking in didn’t exactly fill me with confidence; the place looks like it hasn’t changed much since it opened (probably in the ’70s or ’80s, judging by the decor).  It was also completely deserted at around 12:30 on a weekday, which was a bit worrisome — this seems like the type of restaurant that should have a bustling lunch crowd.

There was a fairly large rear-projection TV (the type they stopped making something like fifteen years ago) in the corner of the restaurant playing the Bruce Willis flop Hostage, which was a bit of a head-scratcher.  This wouldn’t have been so strange had the TV just been tuned to TBS or something, but nope — it was a DVD.  Someone (the owner, presumably) had actually gone to the trouble of buying Hostage on DVD, which is pretty bizarre.

I looked at the menu, which is posted fast-food style on the wall behind the counter; if nothing else, this place definitely wasn’t overpriced.  The hamburger combo comes with a six ounce burger, a generous serving of fries, and a can of soda.  The price?  $6.15.  It’s almost suspiciously cheap. 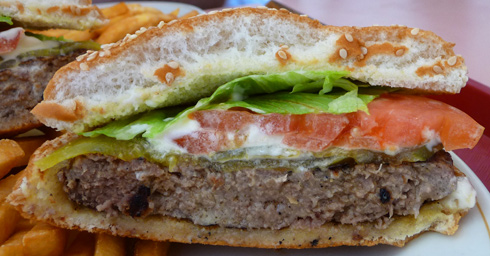 I ordered the combo, and within a few minutes it was ready.  I asked for the burger topped with pickles, tomato, lettuce, and mayo, and I was good to go.

The first thing I noticed about the burger was the aroma.  This is a meatloaf-style hamburger, which was quite apparent from the garlicky smell wafting from the patty.

I took a bite.  Even by the standards of a meatloaf-style burger, this was aggressively spiced, with a strong garlicky taste that pretty much slaps you in the face.

It also had a sausage-like texture, with the beefy flavour thoroughly eliminated by the strong seasoning.  The taste and texture were so far removed from what you’d associate with beef, that I’m pretty sure that this could have been made out of ground pork without the taste or texture being particularly affected.

It wasn’t bad, I guess.  It was juicy and reasonably tasty for what it was, though it was pretty much a complete failure as a hamburger.  I mean, proponents of the meatloaf-style burger will argue that the additional ingredients should serve to compliment the beefiness of the burger, which certainly wasn’t the case here.  Whatever beefiness this (probably low-quality) beef had was completely annihilated by the other ingredients, which makes it kind of hard to argue that it was any kind of success as a hamburger.

As for the fries, they were kind of bad despite being fresh out of the frier.  They were obviously frozen, and they were completely unsalted, resulting in some seriously bland fries.