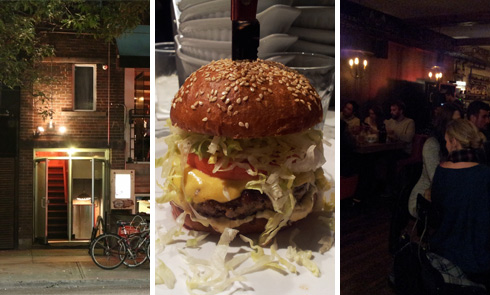 Home of the Brave opened a few months ago, and word very quickly got out that it’s a place you should probably check out. They serve their take on classic American comfort foods like fried bologna sandwiches, BBQ ribs, and tater tots, in a trendy, hipster-friendly environment (read: it’s dark and loud). The burger isn’t on their regular menu — it is, however, on the late night menu (served after 11:00 PM) and it’s the daily special on Saturdays.

I didn’t even realize they had a burger on the menu, but as soon as I saw it I knew that I had to have it. Called The Altar Boy, it’s described as having “house ground beef, tartar sauce, house made processed cheese, tomato & lettuce.”

After a string of mediocre (or worse!) hamburgers, this was just what the doctor ordered: beefy, juicy, and seriously satisfying. It’s a bit busy; it actually reminded me quite a bit of the burger at Wallace & Co. Like that one, it’s a saucy, juicy mess with a little bit more going on than it probably should. And like that one, it’s really good.

I think the quality of the beef is better here than at Wallace & Co. The griddled, medium rare patty has a pretty solid beefy flavour (or at least it seemed to in the few less condimented mouthfuls I got).

The tangy tartar sauce is a little bit more assertive than I’d like, but it tastes good and mostly compliments the burger pretty well.  Though they’re going to the trouble of making their own processed cheese, there’s so much else going on that you can’t really tell.

The fresh sesame seed bun has enough heft to hold up to the messy burger without ever tipping the scales and throwing off the beef-to-bun ratio. It’s pretty great.

It’s a shame that this burger isn’t on the regular menu. It’s kind of sad that a burger that they only occasionally serve here is head and shoulders above what they serve at a lot of burger joints (I’m thinking specifically of my most recent review, the mediocre-at-best Patty & Frank’s), but there you go.

The closest thing on the menu to fries are the tater tots — though with their creamy interior and cripy coating, they’re more like fried mashed potato bites than tater tots. But whatever they are, they’re pretty darn good.

The Buffalo cauliflower is also quite tasty. If you have to eat cauliflower, battered, deep fried, and dipped in house-made Buffalo and ranch sauces is probably the way to go.

(Image of the outside of the restaurant in the header photo courtesy of kiki’s B.F.F. I totally forgot to take that picture. Whoops!)