I was browsing blogTO the other day when I saw, among their most recent reviews, a picture of a big, fat burger.  I read up to “a fat ball of chuck is griddle-fried” and I was gone so fast that I’m pretty sure I left a dust outline where I was sitting.

The small restaurant has a sketchy, old-school diner vibe, with minimalist decor and a griddle — manned by a row of scruffy, bearded chefs — behind the counter.

I scanned the menu too late to notice that they make their own homemade sodas; I had already ordered a plain old ginger ale like a chump.  Dear Wallace & Co. waitstaff: a little heads-up about this would be nice.

Of course, being here to review the burger, I went straight for the Dirty Burg, which comes topped with “cheddar, house bacon, fried onion, coleslaw, BBQ aioli, yellow mustard.”  No, they aren’t shy with the toppings; not surprisingly, there is way, way too much going on here.  The vinegary coleslaw and mustard in particular completely dominate the hamburger’s flavour profile. 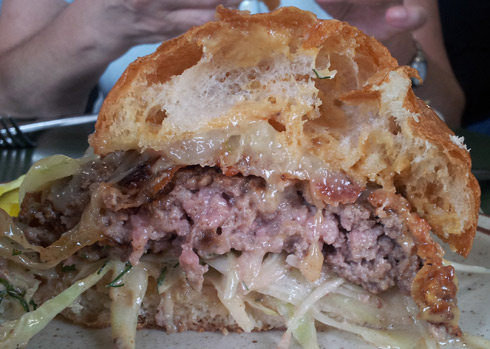 All the other toppings are fine, but the strong vinegary bite of the coleslaw and the mustard make it pretty much impossible to discern too many other flavours.

The beef, however, helps to mask most of the hamburger’s shortcomings.  A fairly substantial patty of fatty, wonderfully juicy beef that is nicely griddled and not overcooked makes me all-too-happy to suffer through an over-condimented hamburger.  Though it’s not the beefiest meat I’ve ever had (in fact it has a disappointingly mild beefy flavour — which, of course, I was only able to discern in the few mouthfuls I got of the beef alone), it still had a decent enough taste.  And man, it was so juicy.

Seriously: ask for extra napkins.  It’s a saucy, juicy mess of a hamburger that fully justifies its Dirty Burger moniker.  Between the fatty, loosely packed patty and the quickly disintegrating bun, it was a race against time for me to be able to finish this with my hands and not have to pick up a fork and knife.

And though the soft, fresh brioche bun had a bit of a hard time holding up to the burger and all of the toppings, it was still pretty great and definitely an above average hamburger bun.  With a burger this messy, even the hardiest of buns would struggle to maintain its structural integrity, so it’s hard to fault the bun in this case.

As for the fries, they were crispy on the outside and creamy on the inside; they don’t come with the hamburger, but they are definitely worth ordering.

One thought on “Wallace & Co.”