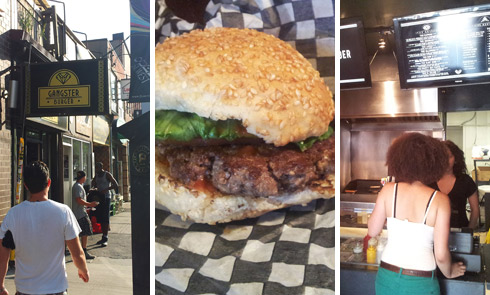 Gangster Burger opened about a year ago, and at the time a lot of discussion was centered around the alleged tastelessness of the restaurant’s name and general theme; people were complaining that the theme was a celebration of thugs and murderers.  This really does not bother me.  For all I care you can name your restaurant Evil Burger and sell Hitler Hamburgers and Pol Pot Poutine — if it’s good, I’ll be eating there with a smile on my face.  That’s pretty much all there is to it.

The furor eventually died down (Führer French Fries — another item I’d eat at Evil Burger.  Okay, I’ll stop now) , which only leaves one thing: are the hamburgers any good?

Let me get one thing out of the way first.  I’m not generally too perturbed about such things, but the ambiance here was horrifically, disastrously bad.  Hindenburg bad.  It’s a tiny little restaurant; probably about the size of the original Burger’s Priest, maybe a tad bigger.  I came on a hot summer’s day, and it was immediately apparent that “air conditioning” is not a phrase in this restaurant’s vocabulary.  It was hot.  And I don’t just mean a little bit toasty.  It had to have been a good 15, 20 degrees hotter in there than it was outside.  It was an inferno.

You know when it gets really hot and they say that youths and the elderly are at risk?  Don’t bring those people here on a hot day, because they will pass out.  By the time I got my hamburger (an excruciatingly long twenty minute wait) I was quite literally soaked in sweat.

Between the heat and the aggressively loud hip-hop being blasted over the speakers, you’ve got an environment that pretty much defines the word unpleasant.  At a certain point I was legitimately thinking about just getting out of there sans-burger, despite the fact that I had already paid.  It was a horror show. 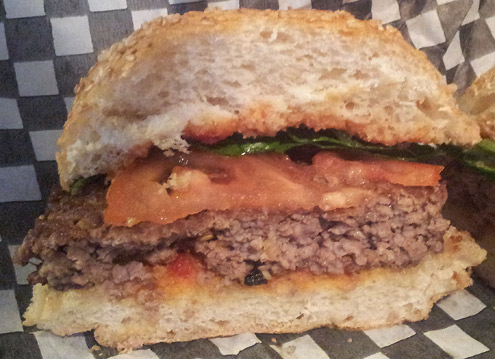 Now that I’ve gotten that out of the way, let me talk about the burger.  It’s smashed and griddle-cooked a la Burger’s Priest, by a sweaty chef who kept wiping his perspiration-soaked face with his sleeve.  Let’s put it this way: come here on a hot day and I can pretty much guarantee that some of the salt in the burger and fries will be from the chef’s sweat.

As I mentioned earlier, the burger took an agonizing twenty minutes to be ready. The wait seems to be due to the fact that, bafflingly, they only cook two or three burgers at a time, despite the fact that they have a fairly enormous griddle to work with.  I guess the sweaty chef can only keep track of a couple of patties at once.

The burger came with a bit of a crust and looking fairly promising.  I’m willing to walk over hot coals for a delicious burger, so if the burger was good, even after the misery of waiting in that restaurant, I probably would have been back.

That is thankfully not an issue I’ll ever have to deal with.

I could tell just by looking at the uncooked beef that it was too lean.  And lo and behold, when I took a bite of the well done burger it was very, very dry.  It was also a bit too tightly packed, resulting in a burger that required a fair amount of chewing power.

The flavour of the beef was fine.  It wasn’t good, but it wasn’t bad either.  It had a meh, nothing flavour that is typical of so-so quality meat.

I got the Don C burger, which is no-frills with just lettuce, tomato, and your choice of sauce.  I went with the Gangster Goo (which has to win a prize for the most unappetizing sauce name ever), which is just spicy ketchup.

The bun was fine, though it was a bit on the dry side and a bit too big.

I hadn’t ordered any fries, though they gave me some anyway as an apology for the long wait.  They weren’t bad.  They had a decent flavour and seemed like they could have been above average, but they were very soggy.

All in all the burger here isn’t horrible, but it’s so aggressively mediocre that I couldn’t possibly foresee any scenario in which I would recommend it, unless you are an aficionado of loud hip-hop and sweating profusely.  But even then, I’d say just get a burger from either Burger’s Priest or White Squirrel (which are not even a five minute walk away, making this place completely redundant) and then head over to your nearest sauna.