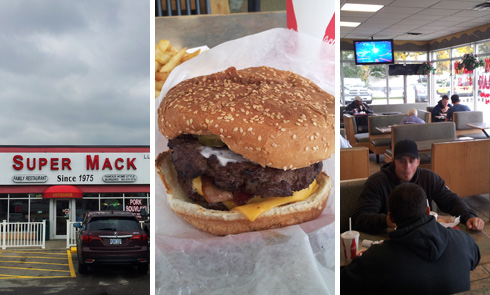 Last time I referred to Urbanspoon’s list of the best burgers in Mississauga, I wound up at Union Social Eatery, which was actually pretty decent. Since I was looking for a burger to check out during my lunch break at work, I decided to give Urbanspoon’s list another shot.

Super Mack is another old-school burger joint / diner that looks like all the other old-school diners in the city; seriously, did every casual restaurant in the ’70s look exactly the same?

I came at around noon and it was fairly busy, which tends to be a good sign.  Like with every other restaurant of this ilk, you order, wait for your burger to be ready, then pick out some toppings from behind the glass.

I ordered the Super Mack burger as a combo, which comes with a generous order of fries and a small drink for under ten bucks, so at the very least it’s a good deal. 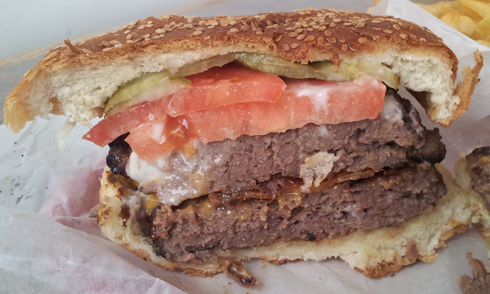 The eponymous Super Mack is a double bacon cheeseburger, and it is enormous. They advertise the patties as being a quarter pound each, but I think they’re even bigger than that. It’s a burger with heft, no doubt about it.

The grilled, slightly overdone patties have a very pronounced flame-broiled flavour. It’s a meatloaf burger, though the spicing is more subtle than many that I’ve had. It still doesn’t have much of a beefy flavour, which is a shame; whatever flavour the beef might have had is pretty much wiped out by the smokiness from the grill and the spices mixed into the patty.

It also has a vague sausage-like texture; between that and the spicing, the whole thing could pass for a sausage sandwich (albeit a mild sausage — a breakfast sausage maybe).

The condiments were fine and the fresh sesame seed bun was above average and held up nicely to the very substantial hamburger. I guess by the standards of old-school burger joints like this it could have been much worse, but I can’t say I’ll ever be back.

As for the fries, aside from having a bit of a stale oil flavour, they were above average.

One thought on “Super Mack”