While trying to figure out what burger to review next, I checked out Urbanspoon’s list of the top-rated burgers in Mississauga (an unimpressive list to be sure — if you think Toronto has a lack of really good burger joints, go to Mississauga and prepare to be horrified).  The number three spot on that list was Union Social Eatery, a restaurant I hadn’t heard of.  Though a high Urbanspoon ranking is generally a questionable gauge of quality, I decided to check the place out.

It’s basically a family-friendly pub, with an all-over-the-place menu that ranges from pub standbys like wings and nachos to Pad Thai and swordfish steaks.

The restaurant’s family-friendly status was in full display when I went, with a birthday party full of screeching,  excited kids sitting a stone’s throw away from my table.  That was a bit grating, but I can hardly fault the restaurant for that.

What I can fault the place for was the glacial service.  There was exactly one waitress serving the entire restaurant, which was fairly busy for a Saturday afternoon.  Naturally, this resulted in service that wasn’t exactly speedy.  The waitress did her best given the circumstances, but the management never should have put her in that position.

So it wasn’t the best dining experience ever.  Slow service + whooping, hollering children = me contemplating suicide. 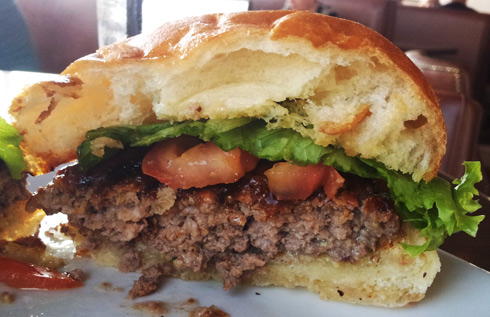 But let’s talk about the food.  When the waitress was finally able to make her way to my table, I ordered the U.F.O. (Union’s Fresh Original) Burger, which is advertised as coming with “ancho BBQ sauce and all the trimmings.”  Though I generally find barbecue sauce to be a little bit overwhelming for a hamburger, I decided to get the burger as is.

A little while later (okay, a long while later), the burger came.  “All the trimmings” turned out to be lettuce, tomatoes, and red onion (which I removed).  There was also some kind of mayo/mustard-based sauce.

I’ve gotta hand it to the place, though my expectations weren’t too high, this was actually a pretty solid burger.  Let me get the bad out of the way first: the grilled burger was cooked all the way to well done and then some, hitting the upper reaches of how much you can cook a hamburger before it hits the point of no return.

Miraculously, despite the hamburger’s borderline-overcooked, fully gray interior, it still managed to be quite juicy — meaning that the beef actually had a reasonable fat content.  Too-lean beef is the norm in the GTA, so for this alone I was tempted to wander back into the kitchen and shake the chef’s hand.

The loosely packed patty also had a very pleasant, mildly beefy flavour.  It wasn’t the beefiest burger I’ve ever had, but considering the caliber of the last few burgers I’ve reviewed, it was practically a revelation.  It also had a bit of flavour from the grill, but not so much to overwhelm the beef.

The condiments, too, were pretty good.  Though I feared that the barbecue sauce would overpower the burger, it was sparingly brushed onto the patty and gave the burger a mild tang while still making sure that the beef was the star of the show.  The mayo, too, added creaminess without over-asserting itself.

The lettuce and tomatoes were fine, and the fresh, buttered-and-toasted bun complimented the burger quite well.

As for the fries, they were crispy, with a fluffy interior, and were kind of perfect.

I should note that the quality of the burger and fries doesn’t necessarily translate to all of the items on the menu; my dining companion had one of the flatbreads and was underwhelmed, commenting that it tasted like something he could have thrown together at home with leftovers.