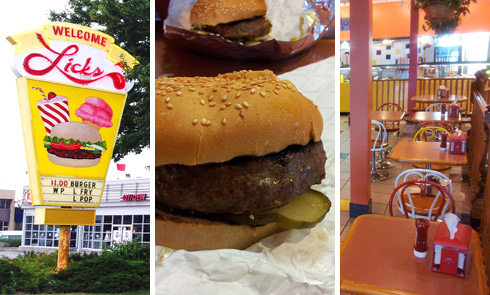 If you live in Ontario (and since you’re reading this blog, I’m assuming you do), odds are that you’ve been to Lick’s.  They’re fairly omnipresent, and they’ve been around for ages.  At one time, a visit to Lick’s meant the promise of above-average burgers in a casual, fast-food style setting.  Though they’ve always served meatloaf-style burgers (not my favourite), they were, at one time, pretty darn good.  Their success was justified.

That was a long time ago.

I’m not sure about the exact moment of their decline, but it probably would have been at some point around when they started selling frozen Lick’s-branded patties in supermarkets.  These frozen patties, I would imagine, are the same ones they serve in their restaurants.  And like all frozen patties, they’re not very good.

At the very least, the employees weren’t singing.  For those of you fortunate enough to have never been subjected to this aural assault, the employees at Lick’s used to sing ’50s pop songs while they cooked up the burgers and fries.  Loudly.  And very far off key.  It was unpleasant enough that it made me second-guess going to Lick’s, even back when it was good.  Thankfully, they seem to have ended this policy, as my ears have been unmolested on my last couple of visits. 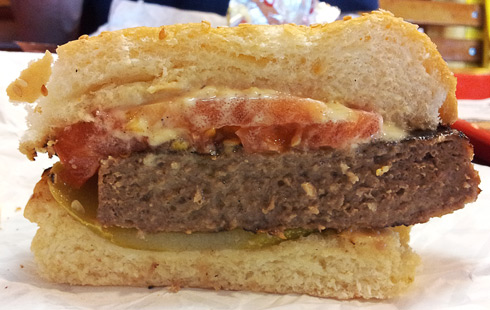 I ordered a homeburger combo (their standard hamburger) with fries and a soda, waited, picked out my toppings from behind the glass, and sat down.

What’s there to say about the current Lick’s hamburger?  It’s a frozen burger and it tastes like a frozen burger. I could end the review right there, but I will say a few words.

It’s a strongly salty burger with that distinctive rubbery chewiness you’d expect from a patty of its ilk.  To its credit, it does have a slightly beefier flavour than you’d expect, though it is mostly drowned out by the hot dog-esque chewiness/saltiness and the other spices.

I ordered the burger with pickles, tomatoes, and Guk, a mayonnaise-based sauce that Lick’s also sells in supermarkets.  The sauce is fine, though its flavour is overwhelmed by the strong patty.  The toasted sesame seed bun was fresh, and complimented the burger well.

The fries, like the burger, have gone downhill.  Though they were once above average, they’re now pale and lifeless — bland and vaguely unpleasant.  I ate a few and felt no need to subject myself to more.