I actually found out about On The Bun via an email from a reader of this blog, though whether he was just an anonymous customer or the owner of the joint is a matter of some debate.  It doesn’t affect my review either way, but it is clear that I wouldn’t have discovered the place if it weren’t for that email; it’s brand new, and there is nary a trace of it on the internet.

It’s an unusually large restaurant (I don’t think finding a seat will ever be an issue here), and there was only one other customer when I visited on a Saturday afternoon.  Clearly, word has yet to get out.

I ordered the hamburger combo with fries and a drink, which is a pretty good deal at less than ten bucks.  The restaurant has a fairly typical setup — you order your burger, wait, then pick from the toppings behind the glass.  I went with tomato, pickles, and mayo, and noticing that they didn’t have any plastic knives, asked for my burger to be cut in half.

That’s when something unusual happened: the owner of the place (who was manning the register and cooking up the burgers solo), noticing me taking pictures and asking for my burger cut in half, sussed out my identity as a blogger.  That was a first.  Thankfully it happened after my burger had been prepared, so I don’t have to worry that he paid my burger any special attention, knowing that I’d be reviewing it (not that I’m exactly the Toronto Star, but I suppose this will be the first word on the place on the internet).

He did, however, send over an order of masala fries, but that was the extent of any special treatment that I received. 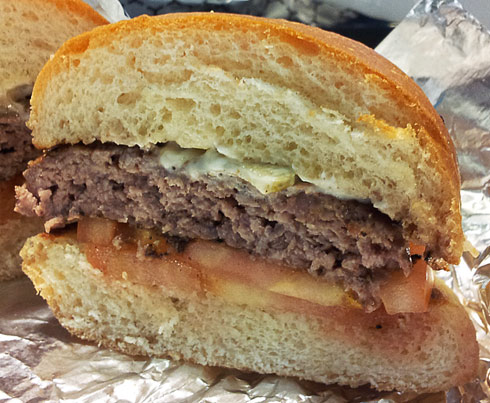 That being said, hopefully you’ll trust the impartiality of my opinion when I say that it was a solid burger.  It’s nothing I’d go crazy over, but you could certainly do worse.

The burger is cooked on a griddle, and unlike another Mississauga burger joint, Burger Factory, it has a decent amount of crust.  This is always a good thing.

The beef itself had a decent flavour; it’s not the beefiest hamburger you’ll ever eat, but it’s reasonably flavourful.  I think it’s seasoned with something other than salt and pepper (I couldn’t put my finger on what), but it’s subtle, so it’s not a big deal.

The meat had a slightly odd texture, like it was perhaps ground too finely.  However, the well done burger was also quite juicy, which I definitely appreciated, and which was enough to allow me overlook any textural nitpicks.

The bun, on the other hand, is harder to overlook: dense, over-sized, and vaguely stale, it completely threw off the beef-to-bun ratio, and was constantly threatening to overwhelm the burger.  In my conversation with the owner, he mentioned that he was eyeing a new bun supplier, which is definitely a good thing.

As for the fries, they were crispy, greasy, and delicious; they actually reminded me quite a bit of chip truck fries.  The masala fries, with their addictively curry-tinged seasoning, were even better.

One thought on “On The Bun”