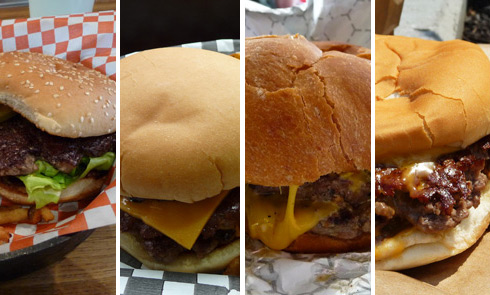 Toronto Life posted its list of the 25 best burgers in the city a couple of weeks ago.  It’s a so-so list that’s mostly acceptable, though it does have a handful of questionable choices (Apache?  Really?).  It’s hard to fault the author of the list, however; I think the mediocrity of the list is, to a large degree, a reflection on Toronto’s still-burgeoning burger scene.

Yes, despite my positive outlook in my Slab Burgers review, things are not all wine and roses in Toronto.

Things are probably no better in any other Canadian city. As ubiquitous as they are, I think burgers are ingrained in the American culture in a way that they’re simply not here in Canada. It seems odd, given how simple they are, but hamburgers are an American food, and we just don’t have the same relationship with them here in Canada that they do in the States.

Don’t get me wrong — I think in the last five years or so, Toronto has moved forward by leaps and bounds when it comes to burgers. But if you look at Toronto Life’s list, there is an abundance of fancy-pants burgers, and it saddens me that most of the best hamburgers in Toronto are apparently made by upscale restaurants. Of course a restaurant with the talent and resources (and the pricing) of a Harbord Room or a Nota Bene is going to be able to make a great burger. That should be a given.

What concerns me is how few burger joints of note there are in the GTA. If you wanted to recommend absolute can’t-miss burger joints to a visitor to our city, what would you recommend? Burger’s Priest, Holy Chuck, and… that’s pretty much it.  There are a lot of good burger joints in the city these days, but very few that are worth going out of your way to try.

Whereas if you go to pretty much any big American city, there are dozens of unassuming diners and burger joints that, if they were to open in Toronto, would immediately be one of the best places in the city (and that serve up burgers that cost something like half of what burger places in Toronto charge). Even American fast food, setting aside the big guys, outshines something like 95% of the burger joints in Toronto — places like In-N-Out, Steak and Shake, Culver’s, Shake Shack, etc., all consistently put out better burgers than almost anywhere in Toronto.

Not to mention the burger styles that go completely unrepresented here. I’m thinking, most notably, of sliders — real sliders. Though the term has pretty much come to mean a small burger, a slider is a very specific (and delicious) way of cooking a burger that is completely lacking in Toronto.

I do, however, think that things are heading in the right direction, and that Torontonians finally seem to realize that a burger can be more than a flavourless puck of meat or an overseasoned meatloaf sandwich that you cram into your mouth when you need something cheap on the go. I think if things continue the way they’re going, maybe in something like five years, Toronto will be able to compete with cities in the States.  But we’re not there yet. 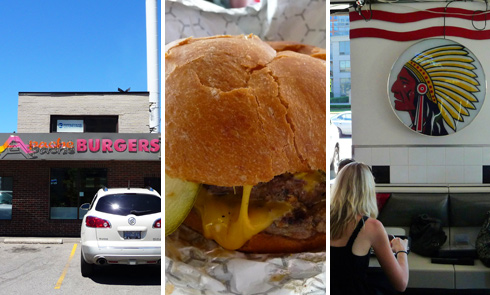 Apache Burgers is one of those really old school burger places that’s been around forever, looking about the same and serving up the same food for decades on end.  People tend to get pretty nostalgic about places they’ve been visiting (and food they’ve been eating) since they were children.  Which probably helps to explain why this place is frequently named as one of the best burger joints in the GTA.

Apache Burgers is fine.  My burger was perfectly edible.  But one of the best places in the GTA?  Not by a long shot.

I arrived just before 1:00 PM on a weekday, and the place was fairly crowded.  Unlike most burger joints downtown where you’ll mostly find twenty-somethings, the demographic here was pretty varied: families, teenagers, workers on their lunch break, and an older couple who have probably been getting burgers here for years.  The place does well, no doubt about it.

It’s a pretty standard layout: order your burger, pay, wait, then pick your toppings from behind the glass.  The whole restaurant was pretty clean and not run-down at all, so I’d imagine that they’ve renovated recently.

I elected to go with the Apache Burger, since it’s generally hard to go wrong ordering a restaurant’s namesake item.  The Apache Burger is basically a double cheeseburger: two beef patties, two slices of American cheese.  I topped it with pickles, tomatoes and mayonnaise (which you’ve probably noticed are my go-to burger toppings).

The burger is not bad.  It’s not good, certainly, but it’s not bad.  The quality of the meat itself is fairly mediocre, and certainly no better than a fast food place like Wendy’s, so how Apache became a burger joint of note is a complete mystery to me.  It’s not even cheap — my Apache burger was $6.79, and with just a small drink and no sides it came up to about ten bucks.

Apache uses prefabricated patties for their burgers, though they are of a slightly higher quality than your average frozen burger.  They don’t have that telltale chewy texture that you typically get from a frozen burger, so that definitely puts them head-and-shoulders above Johnny’s in the great Johnny’s-versus-Apache debate.  But being better than Johnny’s is not exactly a tall mountain to climb.

The patties also had that vaguely gamy, somewhat unpleasant taste that you associate with lower quality beef, but they were basically okay.  They weren’t too dry, and they had a decent texture to them.

The cheese was gooey and fully melted, which was a definite plus.  The other toppings were fine, though the guy who assembled my burger was a bit heavy-handed with the mayo.

The bun is a little too big and bready.  It’s overpowering.  It basically worked in my double burger; the single, however (which is what I ordered the last time I was here), is completely dominated by the large bun.

“Meh” is a good word to describe Apache Burgers.  It’s fine, I guess, but if you go there expecting something above average, you will be sorely disappointed.  Personally, given the caliber of the burgers served here, I’d sooner just go down the street and order from Wendy’s.  At least it’s a bit cheaper.