Jumbo Burgers is yet another orange-hued old-school burger joint in Toronto, which means it’s probably lousy.  Not to be a pessimist, but these places pretty much all either serve a flat-out terrible frozen burger, or if you’re lucky, a freshly-made hamburger that has so much stuff mixed in it may as well be meatloaf.

Well, good news: Jumbo Burgers falls into the latter category, and it’s actually not too bad.  It’s not particularly good, mind you, but when the alternative is a rubbery slab of sadness bound together by pink slime (sorry: lean finely-textured beef), a freshly-made meatloaf burger is a pretty big win.

Like almost every other burger joint of a certain age, you order your hamburger and then pick your toppings from behind the glass.  I went with pickles, tomato and mayo (which, again, like most older establishments, was actually Miracle Whip or something similar). 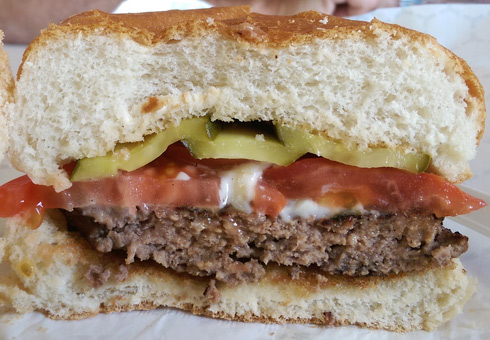 It wasn’t bad.  The burger had a good amount of char from the grill without being burnt (like most places that were open before the fall of the Soviet Union, the burgers are grilled rather than griddled.  Yeah, these places all followed the same template back then).

The patty had a pretty pronounced meatloafy flavour, I’m assuming from garlic and other spices mixed right in with the beef, but as far as this type of burger goes, I’ve certainly had worse.  There was still a vague beefy flavour, even if it was mostly wiped out by the spices.

The well done patty was a little bit dry and a little bit tough, but again, I’ve had worse.  Like I said: it’s not particularly good, but it’s not bad, either.

The toppings were fine, aside from the aforementioned mayo substitute.  The bun was slightly too big and too dense; the beef-to-bun ratio was off, but it was otherwise a decent bun.

As for the fries, they were a bit undercooked, but aside from that they were pretty good.