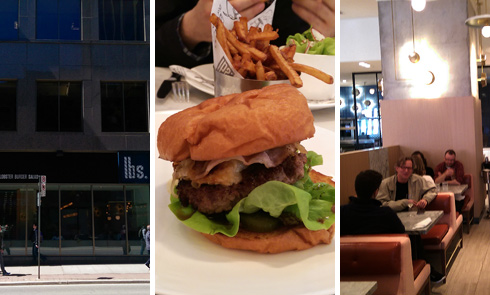 You know when you’re watching a movie, and it kind of sucks, but the lead actor is clearly trying really hard and actually giving a great performance? And it’s a shame, because all of that quality acting is wasted on such a middling film? That’s pretty much how I feel about the burger at lbs.

Not that the burger is even particularly bad; it’s actually fairly good. But it could have very, very easily been great.

If nothing else, the patty is amazing; extending my strained “great actor in a bad movie” metaphor to this hamburger, the patty is the actor. It’s so, so good.

It’s cooked to a nice pink medium with an enviable amount of crust from the griddle. That crust isn’t just for show, either; it adds a great amount of crispiness that contrasts very nicely with the tender beef. And the beef itself is coarsely ground and loosely packed — the texture is perfect. 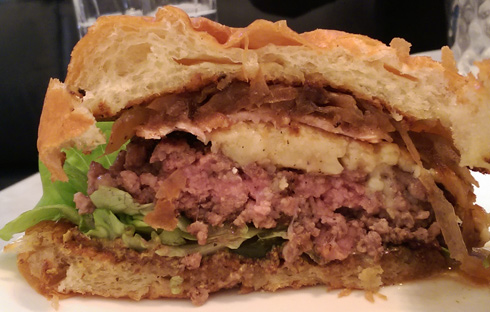 It’s a great patty, no doubt about it. Everything else, on the other hand…

There’s way, way, way too much going on. Between the very liberally applied strong mustard, the abundant sharp cheddar, the vinegary pickles, and the sweet caramelized onions (which are unmentioned on the menu, but quite abundant), the amazing flavour of the patty is absolutely buried. It’s gone. It never had a chance.

And that cheese. Yikes. There’s so damn much of it, it’s so intensely flavoured, and it’s completely cold and unmelted. It’s just a big old slab of cold, crumbly cheese that absolutely dominates the hamburger’s other flavours.  It drops trou and takes a metaphorical dump all over that magnificent patty. Even if it were melted, it would have been too much and too strong — but unmelted? Unmelted it’s ruinous.

I’ve ranted about cold cheese on a burger a few times before, so I won’t do it again. I’ll just say that clammy, unmelted cheese on a hamburger is horrible, and if you’re serving a burger like this, you should feel horrible. It almost single-handedly ruins this hamburger.

There’s also a thin slice of back bacon, which is fine, but it’s completely overwhelmed by the burger’s stronger flavours.  I could barely even taste it.

Then there’s the bun, which in theory is great — soft, fresh, and slightly sweet. But the everything-but-the-kitchen-sink burger has way too much going on; the soft bun just can’t handle it. By the last few bites, it had almost completely disintegrated into sodden mush.

Still, as much as this burger bums me out, it was good; I enjoyed it.  It’s a bit on the pricey side at 22 bucks, but the quality of the patty was so good that I can still easily recommend it, but with a big, fat asterisk.*

The fries also make this easy to recommend.  They’re crispy, creamy, salty, and perfect.  They’re some of the best fries I’ve had in a while.

*The toppings try their best to ruin it.