3 Brewers is a Canadian casual chain restaurant, which means by law, it has to serve mediocre food.

Oh, did you not hear about that law?  Yeah, parliament recently passed a law saying that every Canadian chain restaurant has to serve food that is “mediocre at best, with drab, uninspired cuisine that instills a profound sadness into its customers” (that’s a direct quote from the legislation).

So of course, the burger at 3 Brewers — I got the 3 Brasseurs burger, which comes topped with maple Amber beer sauce, smoked Gouda, bacon, lettuce, tomato and onion — is mediocre.  I mean, they wouldn’t want to break the law, would they?  The burger here stayed very firmly within the bounds of the legislation; it made me sad, just like it was supposed to. 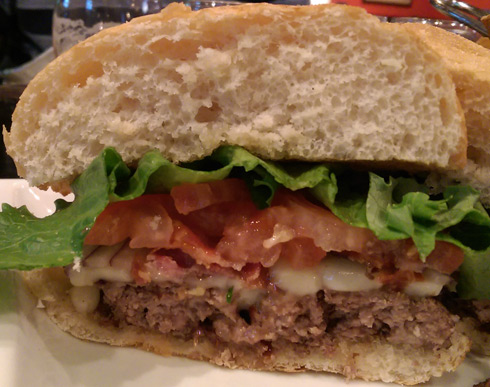 It wasn’t the worst thing ever, I’ll give it that.  It was griddled and pleasantly crusty, and all the toppings were pretty good.  The smoked Gouda was nice and melty (if a bit too strong) — but then who cares when the burger itself is so poor?  The maple amber beer sauce must have just been globbed into one spot in the middle of the burger, because I got a couple of very sweet bites, and the rest of the burger was sauce-free.  The bun, aside from having an exterior that’s a bit too crunchy, was also pretty good.

It’s the patty that really made me sad.  It tasted like the patty from pretty much every other chain like this — it was well done, dry, and completely lacking in flavour.  The beef is lousy, but not too lousy — it’s the cheapest thing they can get away with without it being too flagrant (it’s not a frozen patty, at least).  It tastes like nothing, but it doesn’t offend.

As for the fries, they were fine.  A little bit better than the burger, but again, not good enough that they’re going to risk getting shut down.  Because of the law, of course.