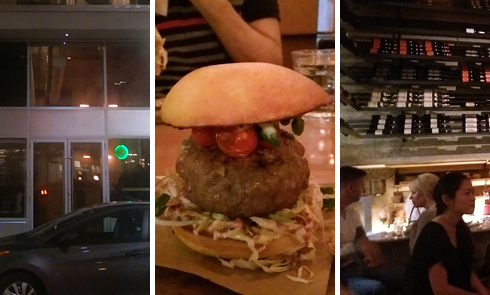 Though I think it’s fairly clear that no one should be taking Toronto Life’s new list of the best burgers in the city seriously, Bar Buca serves their number one choice.  As much as I’d like to pretend that list doesn’t exist, that’s hard to ignore.

Bar Buca’s burger — dubbed the Bombolone Burger for the bun it’s served on — costs 14 bucks, isn’t particularly large, and doesn’t come with any sides.  So no, it’s not cheap, but this is a high-end place; I don’t have any qualms paying a premium for a truly exceptional burger.

The thing that really stands out about this burger is the fact that they’ve mixed lardo (essentially cured pork fat) into the patty.  Mixing pork into a burger is a bit of a bastardization, but I hoped the lardo would add richness without overwhelming the flavour of the beef.  I was cautiously optimistic.

I was a bit concerned just by looking at the burger.  The griddled patty looks more like a meatball and isn’t wide enough for the bun — I know this is an Italian restaurant, but learn how to form a burger patty, guys, jeez.  It’s not rocket science.

Much more concerning is the fact that the burger lacks anything even remotely resembling a beefy flavour, with a taste that I had a hard time putting my finger on.  I knew that it reminded me of something; after several bites, I finally placed it.  It tastes like a slightly muted version of a Bob Evans sausage patty.  I don’t know if this is solely from the lardo, or if they’ve mixed anything else into the beef that would solidify that connection.  Certainly, it wasn’t the most strongly-spiced burger I’ve ever had, but that breakfast sausage taste and texture was undeniable.

The patty was also surprisingly laden with inedible parts that should have been trimmed away long before the meat ever saw a grinder; even hours later, I was still picking stringy bits of gristle from my teeth.  This is inexcusable anywhere, but coming from a high-end restaurant like this (with high-end prices to match), it’s all the more galling.

The menu describes the patty as coming rare, and that’s definitely how they cook it; my burger came almost blue.  Personally, I like my burgers on the rarer side, but if you prefer things a bit more well done, keep in mind that they’re not kidding around.

The patty is topped with roasted cherry tomatoes, and rests atop some peppery coleslaw made with castelfranco lettuce.  These toppings work well enough; the soft roasted tomatoes give the burger a zingy sweetness, and the coleslaw adds crunch and a reasonable amount of peppery bite.

The bun, which the waiter explained is essentially an Italian-style doughnut (a bombalone) that’s baked rather than fried, was a good match for the burger.  It’s a bit more substantial than usual, with a texture that falls somewhere between a traditional bun and a biscuit. Since this is a sloppier burger, the heft of the bun feels right.

The whole thing was decent enough, but best in the city?  Not by a long-shot, but then does it really shock you to learn that a list that includes a frozen burger isn’t entirely reliable?  Would it also shock you if I said that the sky is blue, and grass is green?