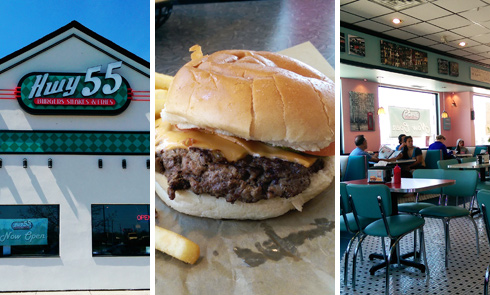 Though I hadn’t heard of it until recently, Hwy 55 is a fairly widespread American burger chain (they’ve got over a hundred locations) that’s making their first foray into the Canadian market with a restaurant out in Oakville. It’s in a spot formerly occupied by a Lick’s; any restaurant replacing Lick’s is pretty much an upgrade by default. It’s always sad when people lose their jobs, but one less place serving up rubbery frozen burgers can only be a boon for humanity as a whole.

The ’50s-diner-inspired decor is a lot like a Johnny Rockets or a Steak ‘n Shake (an aside: I was at a franchise show a couple of years ago, and, tantalizingly, Steak ‘n Shake was there and had a fairly elaborate booth. So they obviously have vague plans to expand into Canada, though thus far there’s no indication that it’s happening any time soon).

Like those two places, it’s waiter service. The menu highlights the Original Special combo, which is described as their “award winning” daily special (though which awards remain unclear), so obviously that’s what I ordered. I was given the choice of cheese among American, Swiss, Provolone, or Pepper Jack. I went with American, obviously; a classic American cheeseburger requires American cheese. Its creamy consistency when melted is perfect for this style of burger, and it imparts a subtle cheesy flavour without overpowering the beef, as stronger cheeses are prone to do.

There was also the choice of toppings, and as usual I went with mayo, pickles, and tomato. 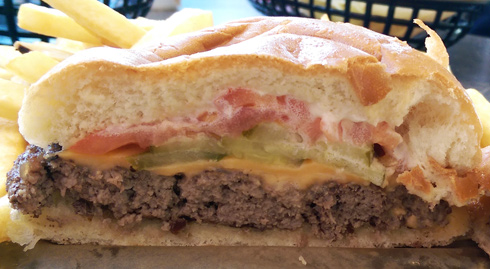 As you’d expect, the restaurant serves a fast-food-style griddled burger. It came looking pretty much picture perfect: a well proportioned patty, a good amount of crust from the griddle, a fully melted slice of American cheese, and a nice looking bun.

And it was actually pretty tasty, though sadly not quite as perfect as I initially hoped. The good? The beef was clearly of a decent quality, and had a satisfying — if somewhat mild — beefy flavour. It was, as it looked, nicely griddled, with a decent amount of crust on the patty. The toppings were fresh and well-proportioned, and the fresh, squishy bun was the absolute perfect bun for a burger such as this.

Unfortunately, there are a couple of fairly big issues that keep this burger firmly in pretty good territory. Foremost, the beef was clearly too lean, and the well done patty was quite dry. Anyone who has read a few reviews on this blog will know that overly-lean beef and too-dry burgers are pretty much my arch-foe, so I’m not going to get into yet another rant about this. Check the archives.

It was also a bit too tightly packed and finely ground, which only compounds the dryness issue. It all adds up to a patty that requires way more jaw-power than you’d like.

Another, more minor issue: whoever seasoned the burger was a bit heavy-handed with the pepper. But I’d much rather have a slightly peppery patty than one with onions, garlic, and other spices mixed in, so I can give them a pass on that one.

As for the fries, they were standard-issue frozen fries. They were well cooked and perfectly edible, but not much more.

Hwy 55 also serves frozen custard, which was the thing I was probably most excited about this place.  For those unaware, frozen custard is basically like ice cream made with a much more custardy base, which gives it that distinctive custard flavour and a very silky, rich creaminess that is unparalleled by regular ice cream.  The only place that I know of in Toronto that serves frozen custard is Jedd’s, and the one time I visited I found it to be icy and underwhelming.

I ordered a scoop of the vanilla frozen custard; sadly, even Jedd’s has this place beat.  Grainy and not particularly creamy, with only a vague whiff of custard flavour and more of a generic sweetness than anything else, it was disappointingly mediocre.  I guess I’ll continue to drive to Buffalo for my frozen custard fix.