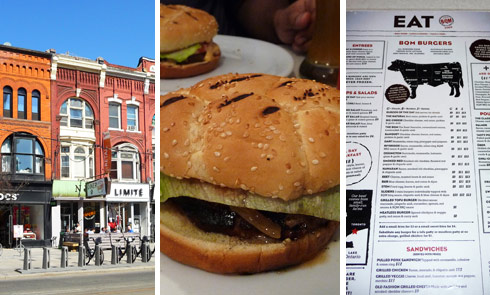 When a burger joint’s menu proudly advertises the fact that all of their burgers have less than 10 percent fat, I’m immediately on my guard.  A burger should strive to be many things; low fat is not one of them.  It is a universally accepted fact that a good burger needs a bare minimum of 15 percent fat; a preferable number is anywhere between 20 and 30 percent.  This is where a burger’s juciness comes from.  So if you’re advertising low fat burgers, you’re pretty much just coming out and admitting that you serve dry hamburgers.  Not a good sign.

The BQM Diner is a small-ish restaurant, with almost comically small booths.  Seriously, the booth was probably the smallest one I’ve ever sat in; I’m pretty sure I could have head-butted my dining companion without having to lean forward all that much.

The menu, oddly, offers three different cuts of beef:  chuck, brisket, or sirloin.  Sirloin is a definite no-go;  though there is the perception that sirloin is a “fancy” cut of beef, thus making it more desirable, it is actually quite lean and a terrible choice for a burger.  It may work well as a steak, but a burger is a different beast altogether.

I was leaning towards the brisket, because it is the fattiest cut, and I was concerned by the menu’s 10 percent fat boast.  However, the waitress came by and rendered it all moot — all they had left was the chuck.  It seemed odd that they were already out of 2/3rds of the menu, given that it was lunchtime and early in the day, but since chuck is a fairly standard cut of beef for a burger, I wasn’t too perturbed. 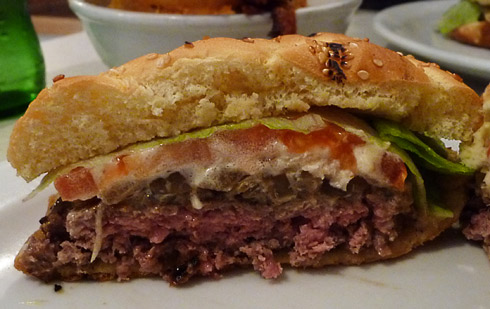 I ordered the BQM, labeled as “the Boss’ favourite,” which comes topped with caramelized onion, horseradish, garlic aioli, lettuce, and tomato.  The waitress asked if I wanted it medium or medium-well.  It’s always a good sign when you get asked how you want your burger cooked; I asked for mine medium.

The burger came, and it was immediately apparent that it was a little overcharred on the grill — it was pretty much completely blackened, giving it a strong smoky flavour that did overwhelm the beef a bit.

Though its flavour was a bit obscured by the liberal amount of charring on the burger and by the horseradish, it was still pretty clear that this was an above average burger, with a nicely beefy flavour.  The toppings generally suited the burger fairly well, though the aforementioned horseradish was probably unnecessary.  I’m generally not a fan of assertive flavours like horseradish on a burger, because they tend to overpower the taste of what is supposed to be the star of the show: the patty.  It is a shame to disguise that flavour, especially when you’re dealing with good quality beef like they’re clearly using here.

I also got the fries on the side, and though they were a bit on the soggy side, they were obviously freshly cut and quite tasty.