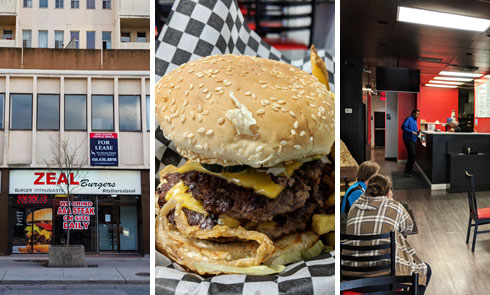 Wow. That’s really all I can say about what they’re serving at Zeal Burgers. Wow.

Okay, I can (and will) say a lot more about it than that, but “wow” seems like the most pertinent, because wow. I can’t remember the last time I was so blown away by a hamburger.

I feel like if this place weren’t so far out of the way, and if it weren’t in such a sketchy area, everybody would be talking about it. It’s a damn shame I didn’t eat this burger a few weeks ago, because I just posted my list of the top ten hamburgers in the city, and this clearly should have been on there. Based on my one visit, it’s a top ten contender for sure. Maybe even top five.

The burgers come either pre-topped or customizable, with an impressive list of cheeses and condiments to choose from. I went with the Z Burger, which is a double cheeseburger topped with lettuce, tomato, pickles, onion strings, and Z Sauce.

The patties were absolutely glorious. They were smashed and griddled, because of course they were. I’m pretty sure every burger joint that’s opened in the last five years or so cooks burgers in this style. I could complain, but when a burger is this good, it feels like it would be absurd to do so.

I mean, how can I complain about this style of cookery when it produces a deep brown crust like this? Look at it:

That’s a thing of beauty. That takes my breath away.

And the flavour was amazing. It was an absolute explosion of satisfyingly beefy flavour, and it was seasoned with just the right amount of salt. It was perfect. It was cooked all the way to well done, which is unfortunate, and yet it was still abundantly juicy. The texture was great, too, with a nice course grind that obviously hasn’t been overhandled.

The cheese was gooey melted American, as it should be. Sometimes two slices of American in a double cheeseburger can be a bit overwhelming, but it was just right here. I think the slices might have been slightly thinner than the norm, and the patties were slightly thicker. Whatever it was, it was perfect.

The other toppings were great, too. The Z Sauce was the usual tangy mayo, and the lettuce, tomato, and pickles were all fresh and tasty. The crispy onion strings didn’t really add all that much, but they didn’t detract, either.

The standard-issue sesame seed bun was nothing special (and it was ever-so-slightly too wide for the patties), but it was fresh and lightly toasted, and suited the burger well.

As for the fries, they were outstanding. Are you surprised? Anyone who can make a burger that’s this good clearly knows what they’re doing. They’re not going to mess up the fries.