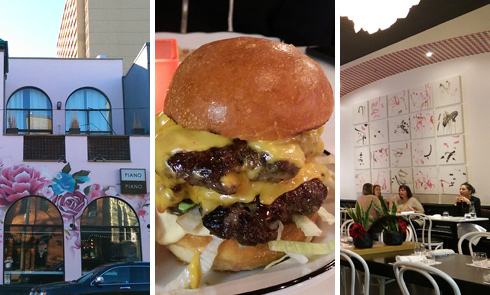 At the end of 2015, Chef Victor Barry shut down Splendido, a fine-dining destination that served meticulously-prepared multi-course meals. It was frequently named one of the best restaurants in the city, if not the entire country.

Early this year, Barry renovated the space and relaunched as Piano Piano, focusing on much more casual fare like pizza, pasta, and yes — a cheeseburger.  How could you not be excited by the idea of a hamburger prepared by one of the best chefs in the city?  How??

Well, I was excited.

And then the burger came and I got even more excited, because it looked perfect.  It’s pretty simple: two patties, two slices of cheese, lettuce, pickle, Dijonaisse.  But look at it though.  Those glistening patties, just the right size for the bun; the melty cheese; the dark, mahogany-brown crust from the griddle…  it’s what cheeseburger dreams are made of.

Or at least, it looked that way.

My struggle to cut the burger in half made it distressingly clear that something was amiss.  A good burger should be yielding and tender; cutting it should be like putting a hot knife through butter.  This was more like trying to saw into a particularly tough steak. 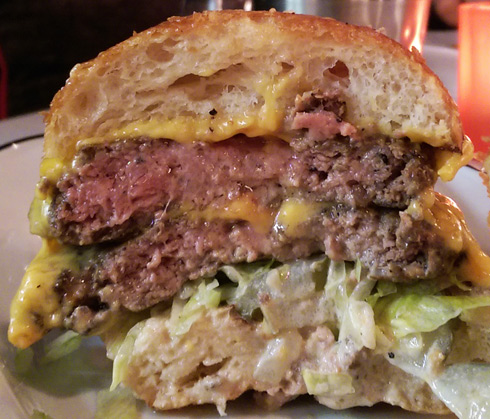 This burger was so bad I almost can’t even believe it.  Like, how can a chef who is presumably as talented as Barry put out anything so horrible, let alone something as simple as a hamburger?  I can’t wrap my mind around it.

I will say that everything but the patty itself was pretty good — the gooey American cheese, the classic condiments, the fresh bun with just the right amount of sweetness and heft — it was all basically right where it should be.

The patty, on the other hand, was misguided on every level.  More pulverized than ground, it was tightly packed, tough, and horrible.  It also had an off-putting sausage-like consistency, possibly from having salt mixed in with the beef.  Between the unforgiving density of the beef and the oddly rubbery texture, it just didn’t want to get chewed.  It was kind of like eating hamburger-flavoured gum.

The taste wasn’t much better.  It was overwhelmingly peppery, which turns out to be a good thing, because this is beef that needs to be disguised with whatever you can throw at it.  It had a gamy, leftover meat flavour that was seemingly trying to compete with the texture to see which could be more awful.

Horrifying texture versus appalling flavour: whoever wins, we lose.

Actually, it’s one of the worst burgers I’ve had in quite a while.

I think this might be the point in the review where you assume that I’m being way too picky.  It looks pretty good, you’re thinking.  How could it be that bad?

As for the fries, they were the polar opposite of the hamburger.  They were amazing.  Though they’re a bit more thickly cut than I generally prefer, they were the perfect combination of crispy exterior and creamy interior.  Eating them with the hamburger is kind of like alternating between smelling a sweet, delicately fragrant flower with someone farting directly into your face.