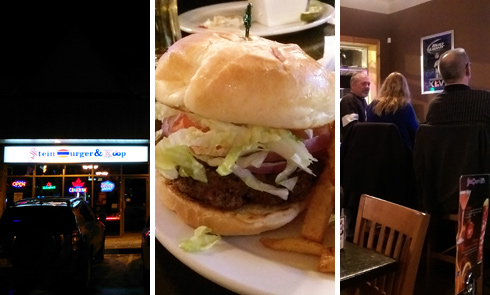 This was actually my second time going to Stein Burger and Koop.  It wasn’t my second time eating there, but it was my second time at the restaurant.  A couple of friends and I visited a few months ago; we were seated and handed menus, and then promptly ignored for the next half hour.  None of us were in a particularly confrontational mood, so we eventually just left, sad and burgerless.  The amazingly bad service (or non-existent, more accurately) would have been impressive if it weren’t so frustrating.

I guess everyone deserves a second chance, so I recently found myself back at the restaurant; the service was much better this time (well, there was service, which by default means it was better).

Stein Burger and Koop is essentially a sports bar, with mostly burgers and wings on the menu, and the usual generic selection of sandwiches and wraps to round things out.  I went with the Steinburger, which is no-frills with just lettuce, tomato, onion, and their “signature sauce.”

It’s a smashed and griddled burger, because apparently that’s the law.  Didn’t you hear?  They passed that law.  All burgers have to be smashed now.

It’s fine.  There’s not much crust from the griddle, and the well-done burger was quite dry, but it was okay.  Nothing about it offended me.  There wasn’t much beefy flavour (or any flavour at all, really), but again, it was perfectly edible.

The toppings, too, were fine.  The onions were too strong for my taste (but then I find most raw onions too strong, so that’s on me) and the “signature sauce” basically tasted like plain mayo, but it all got the job done.

The soft, fresh bun was mostly okay, though it wasn’t quite up to the task at hand; even with the fairly dry patty, the bottom bun sogged up and was close to falling apart in the last few bites.

But whatever.  There are certainly worse burgers in the GTA.  You can eat here, I guess.  When you do, you’ll think to yourself “Yes, that was a burger I just ate.”  Then you’ll stand up, walk out the door, and never think about it again.  It will be consigned to the trash-dump of your memory, where all the hundreds of anonymous, unmemorable meals that you’ll eat throughout your lifetime will go to be forgotten about forever.

Maybe a few months later someone will ask you about it.  “You ate there, right?” they’ll ask, looking to you for some form of guidance.  “How was it?” You’ll rack your brain, straining to remember if you’ve ever even been there, let alone how the burger was.  This will be for naught.  It’s gone.  Nothing about that visit has remained.

On your deathbed, in that brief moment after your heart stops beating and your brain shuts down, a synapse — unused for decades — will suddenly fire.  You will remember that meal, that mediocre burger.  “Oh yeah, I guess I did eat there” you’ll think, and then darkness.