I mean, why wouldn’t they be?  Casual chain restaurants like this one typically serve a burger that’s uninspired, to put it kindly, and I really didn’t have any reason to think that State & Main would be any different.

I’m happy to say that I was dead wrong.  Not that the burger here was anything to get too excited about, but it was actually pretty good.

I ordered the Main, which is a double cheeseburger made with American cheese, and topped with lettuce, tomato, red onion, pickles, and State sauce. 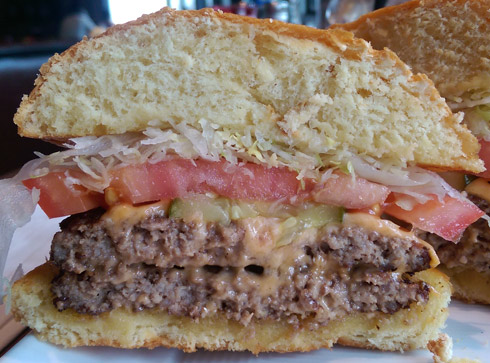 The patties weren’t bad at all, though I’m honestly not sure if they were griddled or grilled.  It was odd; they looked griddled, but tasted grilled, with that slightly smoky, charred flavour that you typically only get from the grill.  So…  I don’t know (I’ve eaten something like three hamburgers in the last six months, so I guess my burger sense is a bit rusty).

The toppings were quite good too, particularly the gooey, melty American cheese.

I’d tell you about the State sauce, but I honestly don’t remember what it tasted like (did I mention that I’m a bit rusty at this burger reviewing thing?  Because clearly I am).  I feel like it’s safe to assume it was just the typical Big Mac-esque sauce that you usually find on burgers like this.

The bun was slightly too dense, but since this was a more substantial hamburger, it worked.

As for the fries, they were perfectly crispy/creamy.  You had the choice between gravy or dill sauce for dipping; I went with the dill, which was addictively garlicky.  It was pretty great.