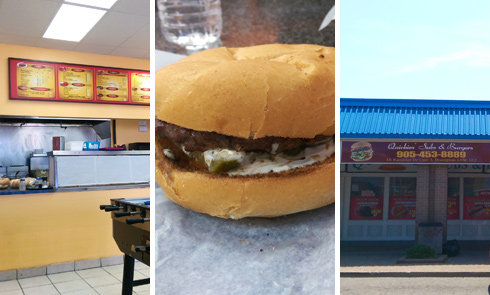 So the other day I was watching Top Five Restaurants on the Food Network; they were counting down the best burgers in America, and I was getting hungrier and hungrier (sometimes the picks on a show like this can be questionable, but every burger in that episode made me want to quit my job and jump on a plane).

I think by burger number two I had decided that I was going to need to have a hamburger for lunch the next day — sadly, I work in Mississauga, which isn’t exactly a burger-lover’s paradise. It doesn’t help that I’ve already reviewed the few burgers that are actually worth eating out here (as far as I know, at least).

Which is how I ended up at Quickies, maybe the sketchiest place I’ve visited for this blog — and I’ve been to a lot of sketchy places, particularly out in the wilds of Mississauga and Brampton.

I’m not even going to sugar-coat it: the restaurant is flat-out gross. Everything looks like it was in desperate need of renovation about a decade ago, and there was a visible layer of grime on pretty much every surface. Most of the things I touched — the tray, a ketchup bottle — were slick with grease. At one point I dropped my phone while taking pictures of the burger, and when I went under the table to retrieve it, I saw that it had landed next to a dust-caked, cobwebbed French fry that appeared to have been under there for weeks if not months.

After I left, I felt like I didn’t just need to wash my hands, I needed to wash everything. I needed one of those jailhouse fire-hose showers.

It’s the type of place where, if I weren’t already planning to write about it, I would have taken one step through the door, looked around and walked right back out.

The menu features a four ounce single, and an eight ounce double. I went with the single, and had it topped with pickles, tomato, and mayo. The burger was six bucks as a combo with a drink and a very generous portion of fries, so if nothing else it’s crazy cheap.

This being an old-school burger joint in the GTA, the burger was, of course, grilled. There’s really not a lot to say about it — it’s a frozen burger, and though it’s a small step above some of the real bottom-of-the-barrel frozen burgers that I’ve had, it still had that overly processed “is this a hamburger or is it a hot dog?” taste and texture that typifies cheap frozen burgers.

The bun was nicely toasted and suited the burger fairly well, aside from being a bit too big, and the toppings were what you’d expect.