Kudos to whichever Wahlberg brother realized that their name made them ideally suited to open a burger joint, and double-kudos to whichever one decided that they should actually make good on what I can only assume started as a silly joke. As a fan of cheesy puns and general wordplay, I approve.

And if you want to eat a hamburger while basking in the reflected glory of a famous movie star and a semi-famous TV star (and a third guy you probably don’t care about), then Wahlburgers will fit the bill.

Of course, there’s a good chance that you don’t care about such things, and are just looking for a tasty burger. Thankfully, Wahlburgers is more than just a Planet Hollywood-esque shrine to celebrity-adjacent dining; it’s certainly nothing anyone is going to go too crazy over, but they serve a pretty good burger.

It’s a fairly large, full-service restaurant with long list of pre-topped burgers to be had. Each Wahlberg has his favourite burger labelled on the menu: Donnie’s got a BBQ bacon burger, Mark has a turkey burger, and Paul (i.e. the Wahlberg you haven’t heard of –- and the chef) has a simple cheeseburger. I went with Paul’s choice, dubbed Our Burger: “Paul’s signature Wahl sauce, dill pickles, government cheese, lettuce, tomato and onion.” 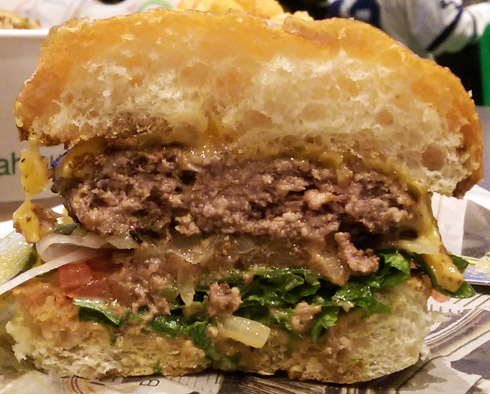 The griddled burger was cooked all the way to well done (despite the claim that they cook to medium on the menu), but was somewhat juicy regardless. It was definitely a bit more dry than I’d like, particularly around the edges, but I’ve certainly had worse. It was also too tightly packed and a little bit dense, making it a bit more tough than it needed to be.

Still, it’s a pretty good cheeseburger outside of those two beefs (no pun intended… oh, who am I kidding? Pun absolutely intended). The meat has a decent –- if somewhat mild –- beefy flavour, and the American cheese on top is nicely gooey. Though the bun looks a little bit big, it’s not overwhelming at all and actually suits the burger perfectly.

The other toppings were all solid — particularly the onions, oddly enough. I normally find raw onions to be a bit too overwhelming for my tastes, but these were very thinly sliced and nice and mild. They added some crunch and oniony character without over-asserting themselves, as onions tend to do.

The burgers don’t come with any sides, so I got an order of tater tots.  I could have gotten fries as per usual, but who can say no to tater tots?  Nobody, that’s who.  They pretty much tasted like run-of-the-mill cafeteria tots.  This isn’t a bad thing.  I also tried the onion rings, which are more like onion strings than what you’d expect.  They were pretty good as well.