Since getting back into town a couple of months ago, I’ve been hearing literally nothing but great things about the burger at Resto Boemo.  The more I heard, the more I was drawn to it like a magnet to… a more powerful magnet?  One of those really strong electromagnets?  (This metaphor has really gone off the rails, like a train that’s been derailed by a really strong magnet.  Okay, I’ll stop now.)

You can choose from either single or double, but other than that there’s just one burger on the menu, and it’s a no-frills cheeseburger: American cheese, lettuce, onion, pickles, and some kind of special sauce.

It’s a good burger, but alas, not a great one.  There are a few things holding it back from being truly special, like a magnet that’s not quite powerful enough to stick, slowly sliding down the fridge door.

But first, the good: it’s smashed and griddle-cooked (because apparently there’s no other way to cook a burger as far as Toronto chefs are concerned), with an impressive amount of crust on its exterior.  The patties are cooked to a perfect medium, with a blushingly pink interior, and a really satisfying amount of juiciness.  That’s not to mention the beefy flavour, which was impressive and pronounced. 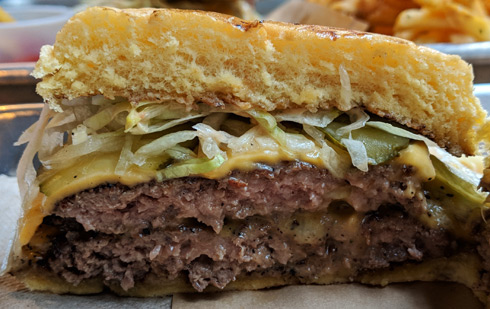 I also quite liked the toppings, especially the thinly-shaved onions — they added a mild oniony flavour without overwhelming, as raw onions are prone to do.  And the gooey, melty American cheese is the perfect accompaniment to this style of cheeseburger.

Oh, and I really liked the bun, too.  It was soft, mildly sweet, and had just the right amount of heft to stand up to the messy burger.  It was actually pretty great.

Yeah, there was a lot about this burger that I really liked.

But, while the patties were nice and juicy, they were also a bit too tightly packed, which made them tougher than they should have been.  And the texture was ever-so-slightly off, with a very subtle sausage-like chew.  I suspect they’re either salting the patties too far in advance, or mixing salt right in with the meat.

And speaking of salt, between the salty American cheese and the salt on the patties themselves, the sodium level here is a little bit intense.  It’s not a huge issue, but it’s there.

As for the fries, they looked and tasted a lot like what they serve at McDonald’s — but not as good.  The exterior was slightly too crispy, and the interior was off-puttingly dry.  It was a turn-off, like two magnets with the same poles pushing each other away.