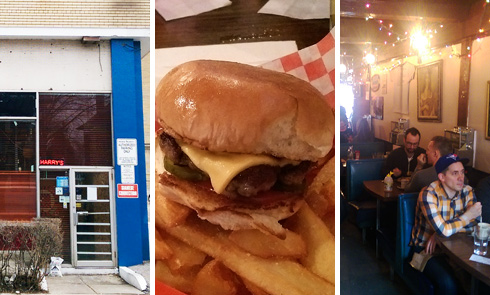 So I’ve actually been having a pretty amazing run of excellent hamburgers — five out of the last six burgers I’ve eaten for this blog have been seriously delicious, with one contender for the best burger in the city.  And when I picked Harry’s for my next review, I felt extremely confident that the streak would continue.

Harry’s is an old school diner that was recently taken over by Grant van Gameren, one of the best chefs in the city whose resume includes places like the Black Hoof and Bar Isabel.  To say that I was excited to try the man’s take on the classic cheeseburger would be quite the understatement.

I haven’t been this disappointed by a hamburger since the great Piano Piano debacle of ’16.  How do Toronto’s best chefs keep on messing up hamburgers so badly??

Harry’s has a few burgers on the menu; I ordered the Plain Jane, a no frills cheeseburger topped with pickles, onions, and ketchup.

You can’t really tell from the shoddy pictures (it was kinda dark in there), but it looked good, at least.  Despite the restaurant’s name, it’s a smashed-and-griddled burger (because of course it is), and it had exactly the type of dark brown crust you want to see. 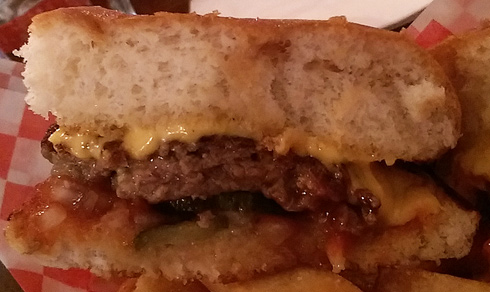 The patty is off, though.  The taste and the texture are both just… wrong.  It had a chewy, sausagey texture that makes it immediately apparent that something is amiss in the kitchen.  I don’t think they mixed any spices into the beef, however, I’m pretty positive that they mixed salt right in with the ground beef — a pretty flagrant burger no-no that results in a burger whose texture is closer to a sausage than a traditional hamburger.

The taste, also, was off.  I’ve had worse, but instead of the satisfying beefy flavour you expect from decent quality meat, the taste was just muddled.  It was neither here nor there; a whole lot of nothing.  It wasn’t altogether unpleasant to eat, but it was one of those burgers that had me furrowing my brow with every bite.  “Why does it taste like this?  What is this flavour?  Where’s the beef?”

(Yes, this burger had me quoting a 30 year old advertising slogan.  Though technically the beef was there, but where was the flavour?)

It was topped with a very McDonald’s-esque combination of ketchup, melty American cheese, tiny little onion bits, and pickles.  I’m normally not a big fan of ketchup on a burger, but they didn’t overdo it here; combined with the other toppings, it worked.

The bun was a pretty classic soft-and-squishy fast food style bun; it was mostly pretty great, but it was a bit too big for the very diminutive patty.  The beef-to-bun ratio was off.

As for the fries, I kinda thought they’d be lousy when I first saw them; they’re the thick-and-chunky style that I’m not a big fan of.  But they were perfectly cooked, with a crisp exterior and a tender interior.  They were great.

One more thing: when I was looking up Grant van Gameren for this review, I found this 2014 interview with the man from BlogTO.  They asked him for one food trend that needs to end, and he gave a very simple one-word answer: burgers.  And suddenly it all seemed so clear.  This hamburger tastes like a burger made by a guy who would give that answer.  Someone who doesn’t quite get what makes a great hamburger so special.

You know that old saying about how when you cook with love, it shows?  Well it’s also pretty apparent when the opposite is true.