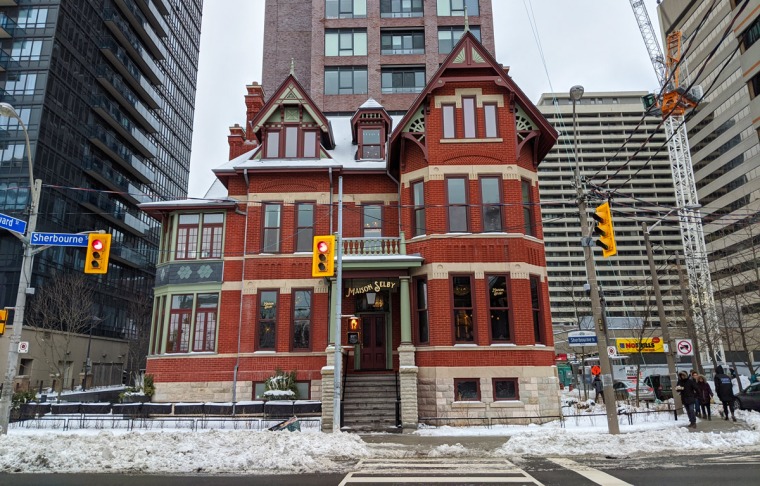 Sure, throw a couple of toppings on there that enhance or compliment the beef — but that’s it.  A lot of chefs tend to overthink it or want to put their own stamp on a tried-and-true dish.  Don’t do that.  The beef is the star.  It’s been the star for over a hundred years.  You’re not better than that kind of history.  If the toppings are getting in the way of what makes a burger great, you’re doing it wrong. 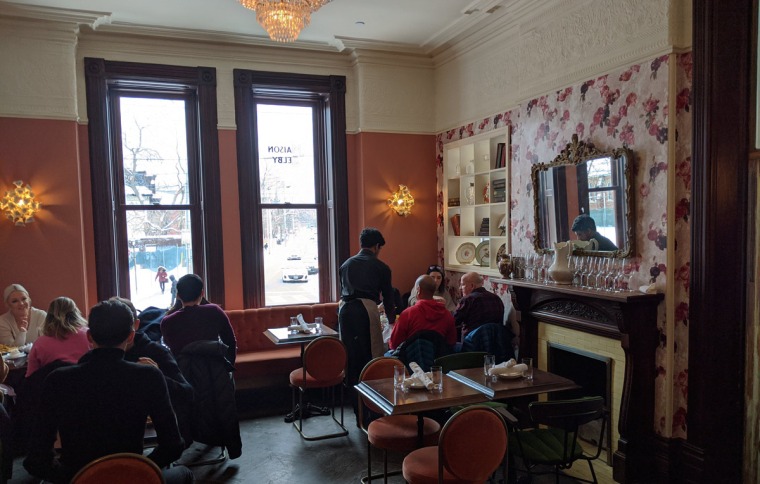 Of course, I probably should have known that something called a “French Onion Beef Chuck Burger” would be over-condimented.   But how could I resist?  French onion soup is delicious.  Hamburgers are delicious.  Surely combining the two should be delicious?

And yeah, it kinda is.  That’s the thing.  This was a Tasty Burger.  But it was all about the toppings. 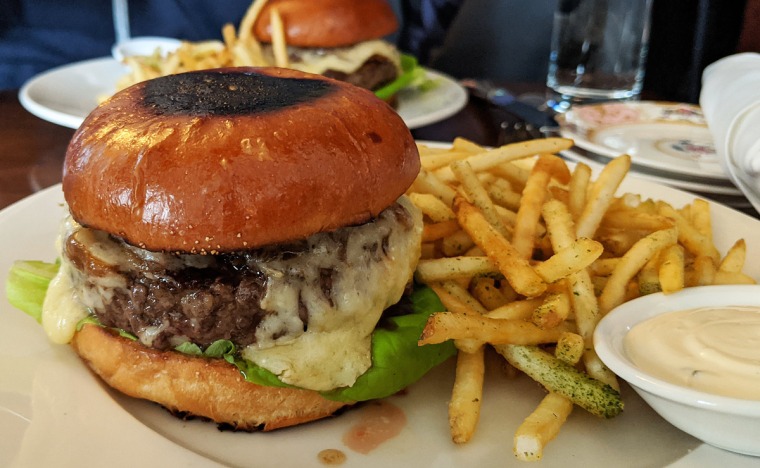 In my defense, caramelized onions and gooey cheese are both a hamburger’s best friend, so I had high hopes for this.  But the sharp Gruyère was way too assertive, as was the voluminous pile of rich, flavourful onions (not to mention the dijonnaise, which adds another strong flavour into the mix).

It’s too bad, because the patty was decent.  The waiter asked if medium was okay, but it actually came out closer to medium rare — a delightful surprise.  And it was quite juicy.  But even aside from the fact that it was way over-condimented, the quality of the beef itself was only so-so. 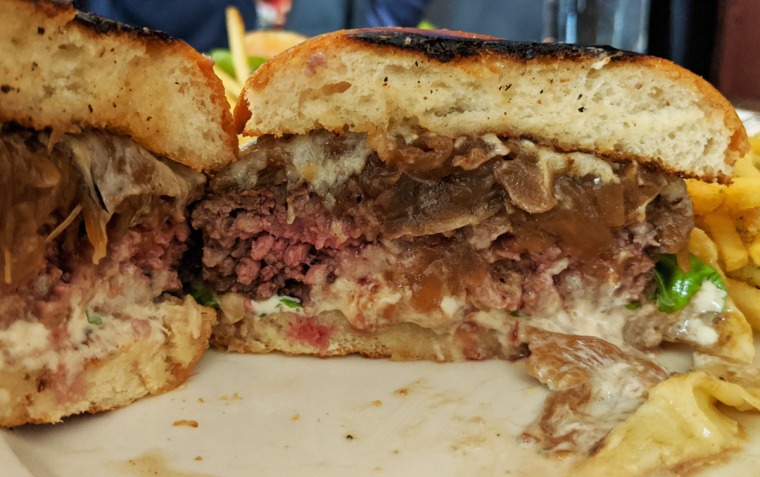 That’s pretty much moot, however — the only way I was able to tell what the patty tasted like was by specifically pulling out a piece so I could try it on its own.  Underneath all of those assertive toppings, the patty is more about its texture than anything else.  And the texture is great.

I don’t know.  I’m probably just being a curmudgeon and/or a burger snob.  I enjoyed eating the burger at Maison Selby.  It tastes good.  But for all the creativity on display, is it better than a plain burger that’s well prepared and made with great quality beef?  No.  No it is not.

As for the fries, they could have been fresher, but were otherwise quite tasty.  In particular, the herby aioli that comes on the side is fantastic. 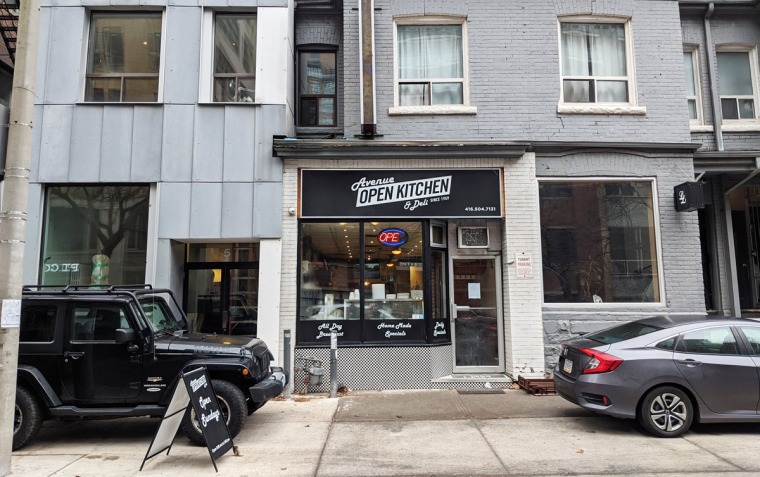 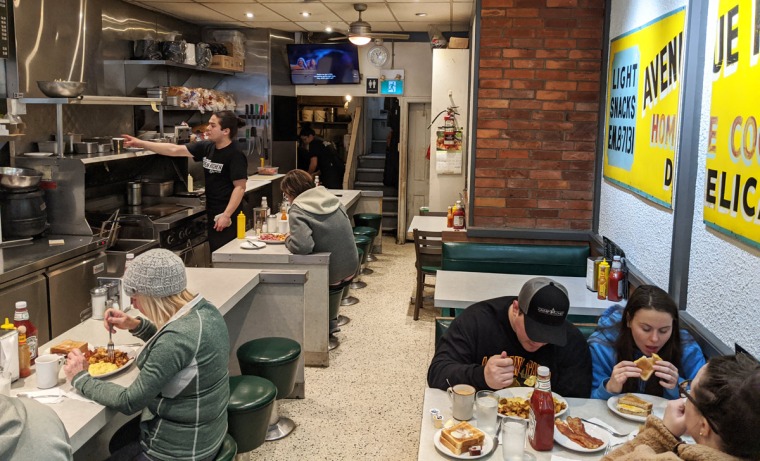 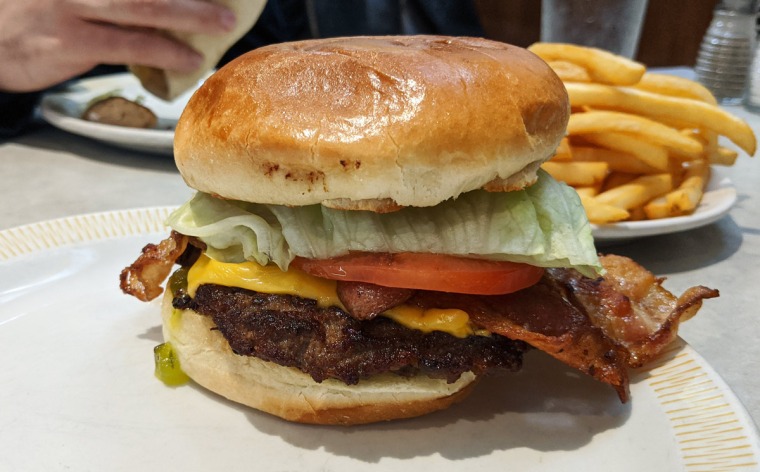 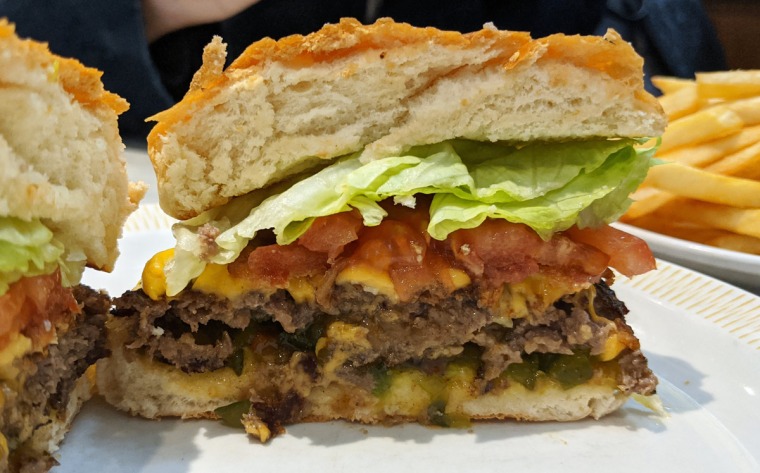 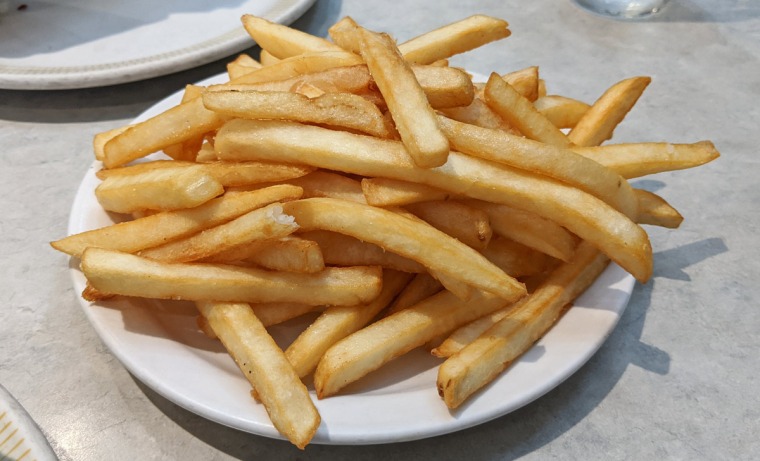 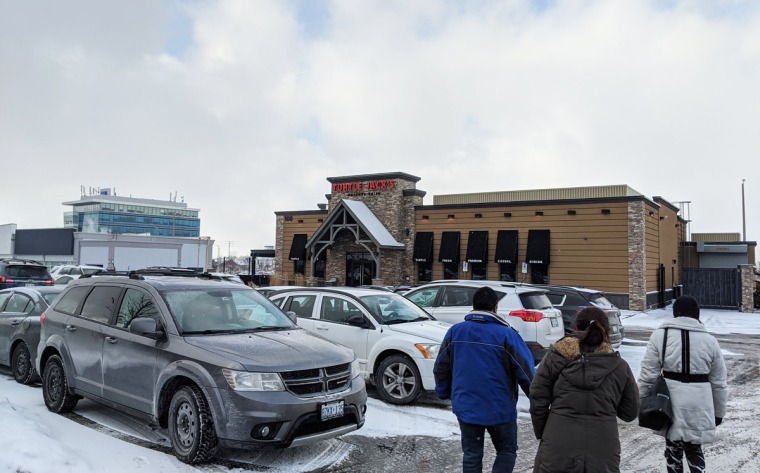 Seriously: no.  I’m so sick of the no-effort pucks of despair that they serve at basically every Canadian chain restaurant like Turtle Jack’s. 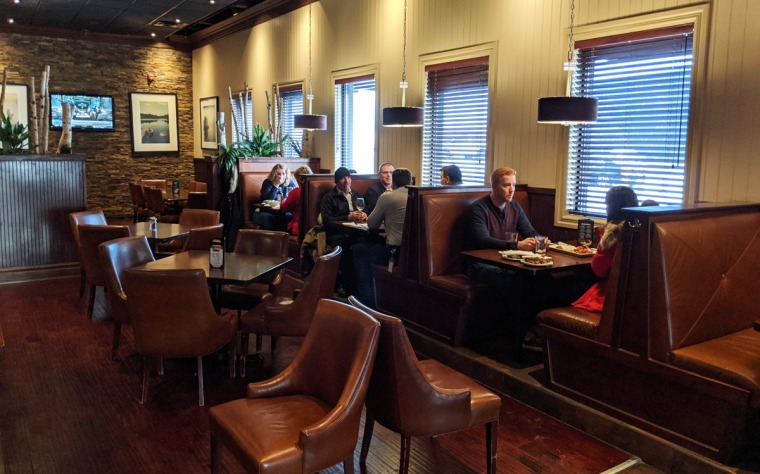 How?  How does this happen?  How can a restaurant serve a hamburger that’s so unambiguously bad that anyone with a mouth and functional tastebuds will immediately identify it as the off-putting garbage that it is?

That’s a legitimate question and I’d like someone at Turtle Jack’s to answer it.  Also, Turtle Jack’s?  While you’re here?  Get out of here with that horrific slop.  Get all the way out and never come back.

The burger at Turtle Jack’s is incredibly dry and dense, and it’s an absolute bummer to eat.  It made me sadder and sadder with each mouthful.  The beefy flavour was almost nonexistent, with a vaguely leftovery funk that makes me think they might be precooking the patties and reheating them to order.  It’s bad.  Bad bad bad bad bad.

I feel no need to discuss it further, because it’s a piece of garbage that’s clearly made by people with the cynical belief that they can serve whatever the hell garbage they want and people will eat it.  If you order it, you’re proving them right.  Please don’t do that.  I ate it so you don’t have to. 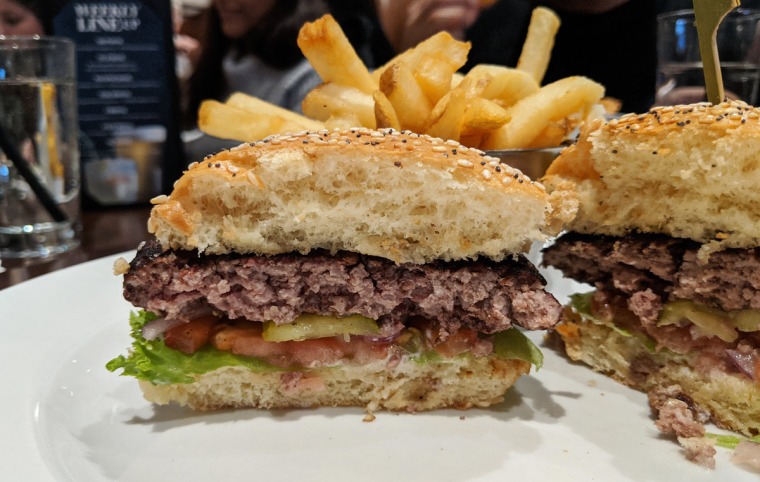 The fries were slightly better (because there’s really nowhere to go but up from that burger), but they were the boringest of boring frozen fries. 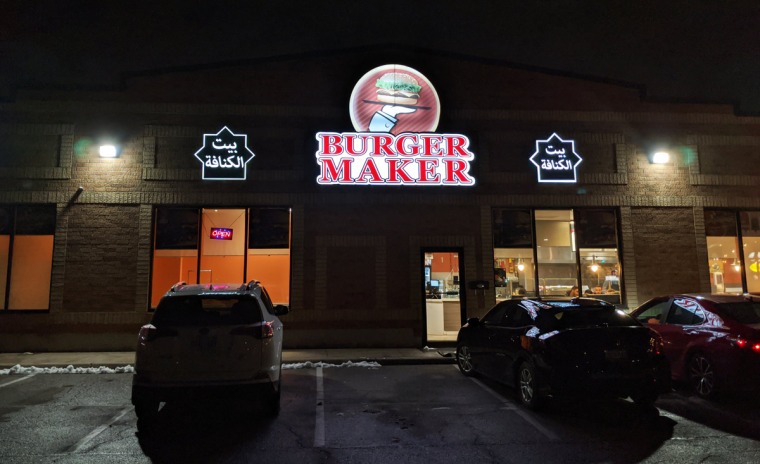 Burger Maker is a bit of an odd concept.  Apparently it started out as a place called Sweets House that specialized in kunafe, a very tasty Middle Eastern dessert.

It’s a burger joint now, though the kunafe remains on the menu, and the Sweets House signage can still be seen in the restaurant.

I think it’s safe to say that there aren’t many restaurants in the world that specialize in hamburgers and kunafe, so that’s interesting.  Alas, I didn’t try the kunafe — they only sell it in big, shareable trays that they make to order. 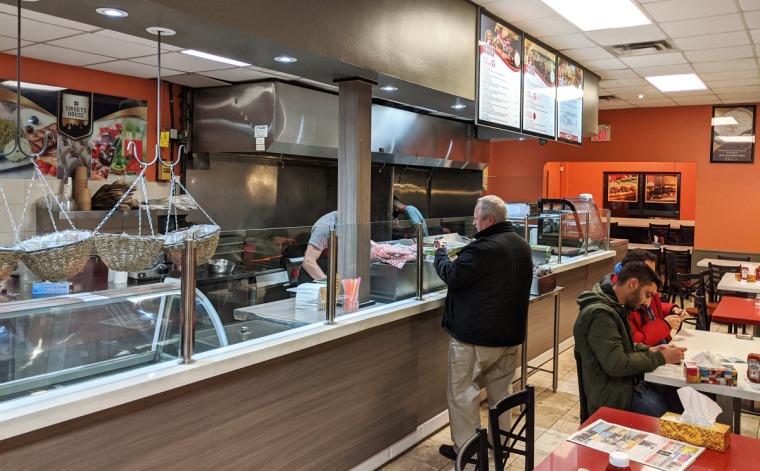 I did, of course, try a hamburger.

I got the BM Burger (should someone tell them that BM has… other meanings?), which comes topped with pickles, tomato, onion, lettuce, and BM sauce (seriously, someone should say something).

The patty is grilled, which is a nice change of pace, with a decent amount of flavour and texture from the grill.  Its flavour is a bit odd, however — I wouldn’t call it a full-blown meatloaf burger, but it’s definitely spiced with something beyond salt and pepper, and the spicing is mixed right into the meat, giving it a slightly sausage-like texture. 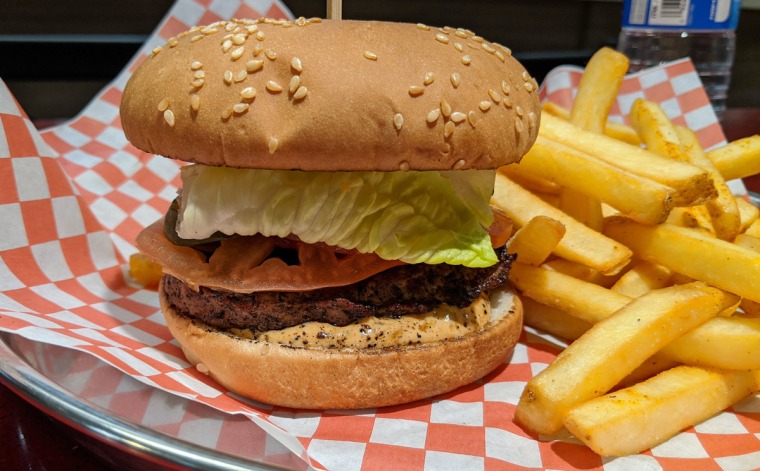 The well done patty was also a bit on the dry side, with a texture that’s slightly too finely ground, but it’s basically okay. 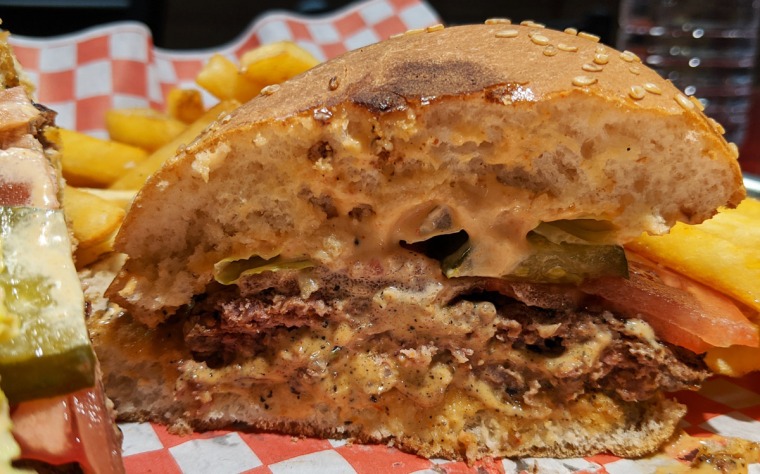 The BM sauce was quite tasty, however, which is good because there was a lot of it.  It’s zingy and a little bit sweet, with a nice roasted garlic flavour.

The bun was slightly oversized for the patty, but it was soft and fresh enough that it was barely an issue.

As for the fries, they weren’t great.  They were overly crispy on the outside and slightly undercooked on the inside. 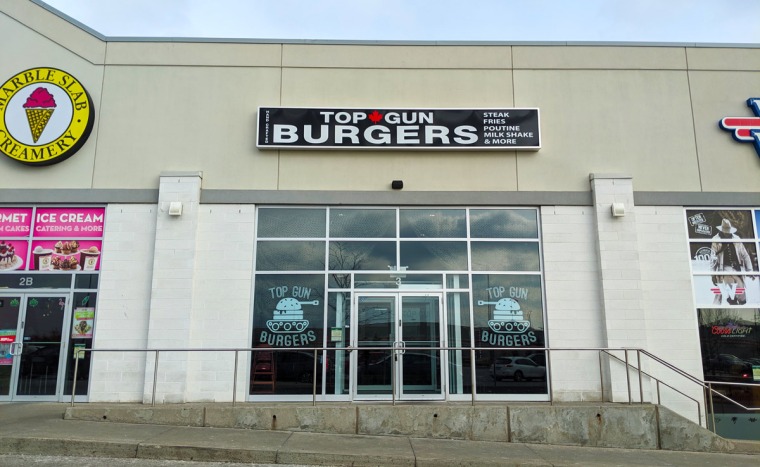 I’m not sure why it’s taken me so long to check out Top Gun Burgers.  I guess their original Kensington Market location opened shortly after The Burgernator, a nearby burger joint I didn’t care for, and it looked similar enough that I was never particularly motivated to try it.

In the meantime, however, Top Gun Burgers have done well enough to expand to eight locations throughout the GTA, so this review was long overdue. 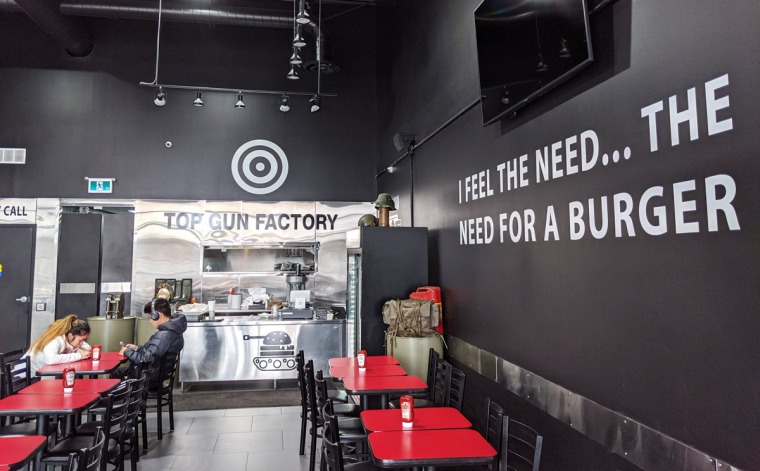 Their fighter-plane-inspired menu has over a dozen choices, but I went simple with the Bobcat: “beef patty, fresh onion, lettuce, tomato, pickles and top gun aioli.”

It’s not the best, though it certainly looks impressive.  The smashed and griddled patty (of course it’s smashed and griddled, what else would it be??  There’s no other way to cook a burger, right???) looks great, with a picture-perfect amount of crust from the hot griddle. 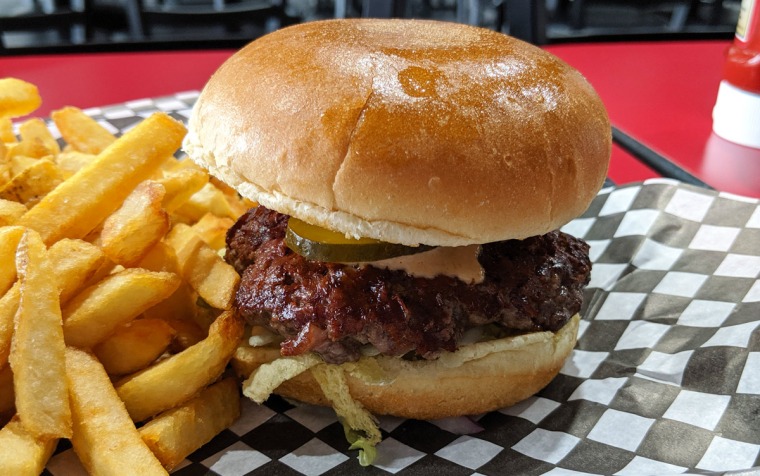 Alas, though it’s certainly not bad, it doesn’t taste quite as good as it looks.

The patty is the biggest issue.  It’s been cooked to well done and beyond, not to mention the fact that it’s a bit too tightly packed.  It’s vaguely juicy, but still dryer than it should be. It all adds up to a patty that’s a bit of a tough chew. 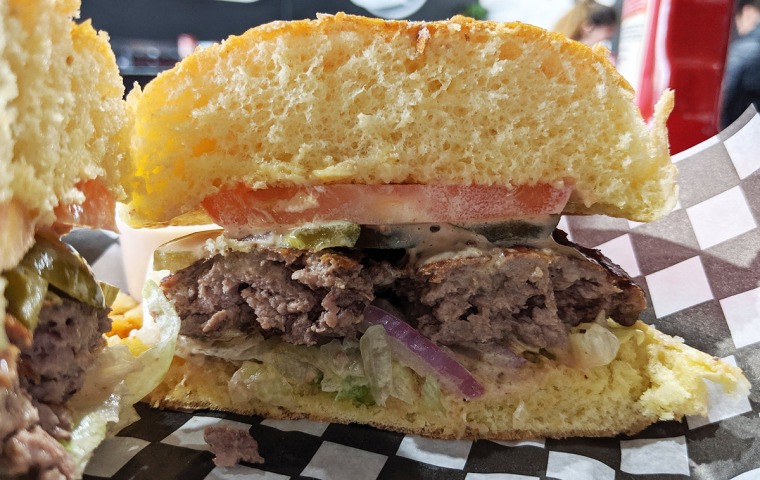 The burger has a very mild beefy flavour; it’s nice, but not nearly as beefy as you’d like it to be.

The toppings are what you’d expect, other than the Top Gun aioli, which is zippier than the standard burger sauce, with a slightly smoky flavour.

The bun is mostly okay, though it’s a bit too dense. 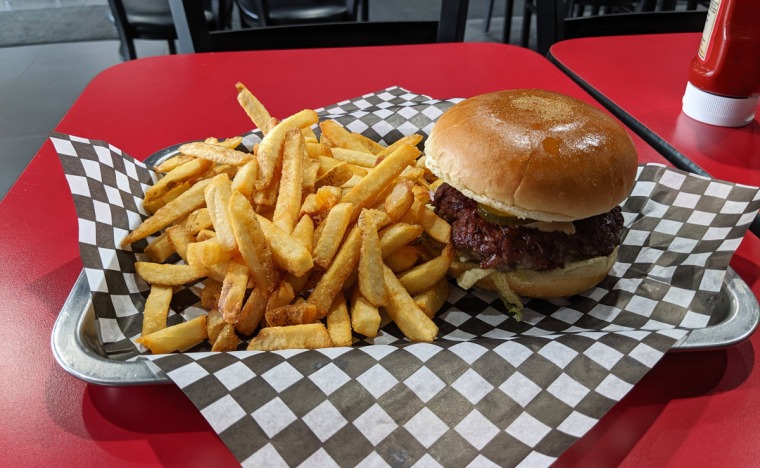 As for the fries, they’re absolutely phenomenal.  They’re some of the best fries I’ve had in ages; they’re perfectly crispy and creamy, and the flavour is outstanding.  It’s worth coming here just for them.  Seriously, seriously good.