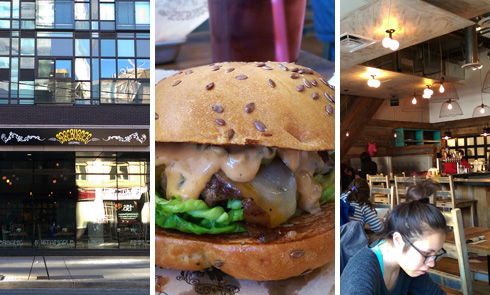 It makes me really happy when I think about how good it’s gotten for burger-lovers in Toronto over the last several years.  A few years ago, with the dearth of great burger choices in the city, Bareburger would have been a breath of fresh air.  But now?  Not so much.

And Bareburger is a fairly popular chain in the States, with most of its locations around New York City.  I’ve been under the impression that New York had us handily beat in the burger department, but if this place is good enough to thrive there, it might not be so clear-cut.

It’s not even that Bareburger is bad, per se.  It’s fine.  There’s just nothing particularly noteworthy about it.

It’s a nicely designed restaurant, with lots of light coming in from the windows.  Unlike a lot of burger joints in the city, it’s waiter service, with more than just burgers on the menu (and more choices than just beef for the burgers).

You can either pick one of their handful of pre-topped burgers, or you can customize your own.  I went with the Standard: “beef, colby, stout onions, dill pickles, special sauce, brioche bun.”

Like I said, it’s fine.  The griddled burger comes cooked to well done (they say medium well on the menu, but this sucker was gray throughout), and while it was vaguely juicy, it was dryer than I’d like.  It was also a little bit too dense, and somewhat tough.

The patty has a very mildly beefy flavour, which was entirely wiped out by the burger’s toppings.  In particular, the zesty special sauce completely knocked out any flavour from the beef itself.  It wasn’t bad, don’t get me wrong — it was just a bit overwhelming.

The other toppings were pretty good as well.  The fully melted colby cheese was mild and creamy, and the caramelized stout onions were dark brown, with a sweet, rich flavour.

I wasn’t as keen on the brioche bun. It was okay, but it was way too dense and substantial for the task at hand.  It was also a good thirty percent wider than the patty itself, leaving me with a ridiculous amount of bun on my plate after the patty was long gone.  Come on, guys.  Seriously.  This is burger making 101.

I feel like I’m piling on more criticism than this place deserves (again, it’s not bad), but I have to mention that it’s alarmingly expensive.  The burgers are all in the 12 to 15 dollar price range, and that doesn’t include a side.  Fries will run you another three bucks.  Factor a drink and a tip on top of that, and you’re looking at spending well north of twenty bucks.  I don’t always pay a ton of attention to this in my reviews, because it’s the quality of the burger that really concerns me, but these prices are a little bit intense, especially considering the only-average quality of the food.

The fries, too, were good but not great.  But hey, let me close things out with a couple of things I really liked.  They have a handful of interesting sodas on the menu — I have a hard time saying no to a unique soda, so obviously I got one.  I went with blueberry, and it was surprisingly good.  The blueberry flavour was really outstanding; it almost tasted like a blueberry pie in soda form.  It was one of the best sodas I’ve had in quite a while.

For dessert, my dining companion ordered the Snickerdoodle ice cream sandwich; I wound up splitting it with him, and oh man was it good.  I think it might even have Bang Bang beat for the title of best ice cream sandwich in the city.  The cookie was cinnamony and chewy, with the absolute perfect ice cream sandwich consistency — dense, but not too dense, with just the right amount of chew.  And the super creamy ice cream had a satisfyingly intense roasted marshmallow flavour — I think it was either from Greg’s, or very similar to what they serve there.  It was the absolute perfect match for that cookie.  I’m not even kidding: you need to go there just for that sandwich.  It was outstanding.