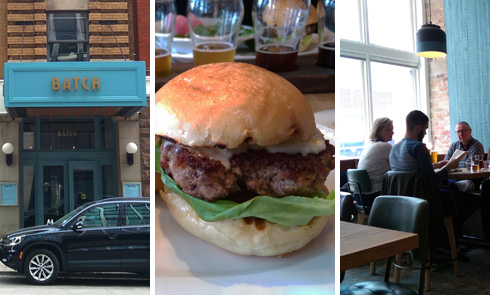 Batch is shockingly great.  It’s a corporate brewpub — it’s owned by Creemore Springs, which is owned by Molson.  I don’t think it’s unreasonable to expect the food to be passable at best; something along the lines of chain fare like Kelsey’s or Milestones, with the several beers on tap being the main attraction.

Based on this one visit, at least, that couldn’t be farther from the truth.

The Batch burger is described on the menu as “dry aged beef + cheddar + red onion + ranch mayo.”  It’s served by default at medium rare; an immediate point in their favour.

As I cut into the hamburger, I could already see juices on the plate.  Another several points.

Yes, it’s an amazing hamburger.  As advertised, it came cooked to a perfect medium rare, with an immensely satisfying, deep brown layer of crust from the griddle.  And it’s juicy — so, so juicy, to an extent that’s almost four-leaf-clover-rare in a city that’s so dishearteningly crammed with dry, overcooked patties.

Aside from the awe-inspiring juiciness, the texture of the beef is just right.  It has a nice coarse grind that hasn’t been overhandled, resulting in a patty that has the perfect amount of tenderness without ever tipping the scales into soft and squishy territory.  It’s so good. 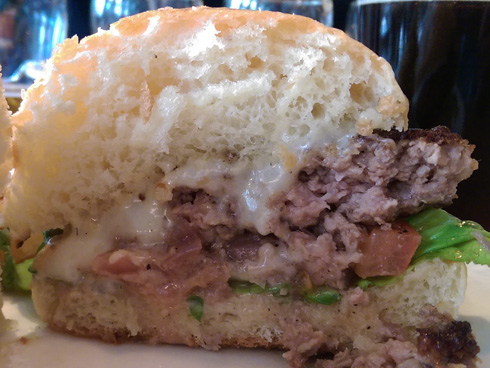 The flavour of the patty is also well above average, though this is the one area where the burger stops just shy of greatness.  Though it certainly has a nice beefy flavour, it wasn’t quite as pronounced as it could have been.  It’s still better than most — but when you’re a straight-A student, that one B+ feels like a failure, even if in any other context, it’s an amazing grade.

The toppings were similarly superb.  Though the menu claims that the cheese is cheddar, I’m not so sure; it was either a creamier cheese along the lines of brie, or a higher-class processed white cheddar.  Whatever it was, it was mild, creamy, and suited the burger perfectly.

The red onions were soft and griddled; to me, a hamburger and grilled onions are like peanut butter and jelly.  Best friends 4 eva.

I was a bit concerned about the ranch mayo, as that dressing has a pretty assertive flavour, but it worked perfectly.  It added a nice hit of flavour without getting in the way.  The other toppings (lettuce and tomato) were solid, as was the soft, fresh bun.

The fries, sadly, were pretty weak.  I came at brunch, so I’m not sure if they were supposed to be some kind of amalgam between french fries and home fries, but they just didn’t particularly work.  They were way too thick, slightly chalky in the middle, and just all-around unsatisfying.  The funky house-made ketchup helped, but even then, the fries couldn’t even begin to hold a candle to that outstanding burger.

The meal ended on a high note, however.  The coconut cream pie — with its rich, custardy flavour and perfect balance of coconut — easily gives the famous Scaramouche pie a run for its money.