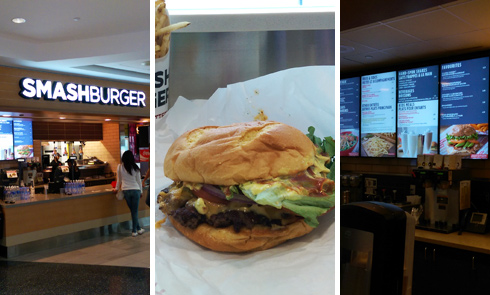 Though I’m assuming they’re going to expand a bit more at some point, right now if you’re in Ontario and you want to try Smashburger, you’re going to have to fly internationally out of Pearson.  I actually was flying internationally recently, so I was pretty excited to try this (supposedly) higher end American fast food chain.

They’ve got the standard selection of hamburgers, chicken burgers, and salads that you’ll find at any of the big chains.  I got the Classic Smash, which is a single-patty cheeseburger that comes with American cheese, Smash Sauce, ketchup, lettuce, tomato, pickles, and onion.

It’s… fine, I guess?  I was expecting something more along the lines of places like Five Guys or In-N-Out, but this definitely isn’t that.  It’s closer in quality to Wendy’s or A&W.  Not bad in a pinch, but definitely not something I’d get excited about or go out of my way for.

The patty — with its dry, pebbly texture and lack of anything you’d recognize as a beefy flavour — is fast food through and through.  As per the name of the joint, it’s smashed, with a bit of colour and texture from the griddle.  This seems more cosmetic than anything else, as it doesn’t particularly add anything in the flavour department.

The slightly sweet bun is fine, as are the toppings (including the Smash Sauce, which is the typical tangy mayo that you’d expect).  The whole thing is fine — it’s a bit of a shrug, but I certainly didn’t dislike eating it.

As for the fries, I tried the Smash Fries, which are tossed with olive oil, garlic, and rosemary.  They were thinly-cut and tasty, but man were they oily.  They were doused in olive oil; they were dripping with the stuff.  I poured them out next to my burger, and they left a huge pool of oil in their wake.  It was pretty ridiculous.