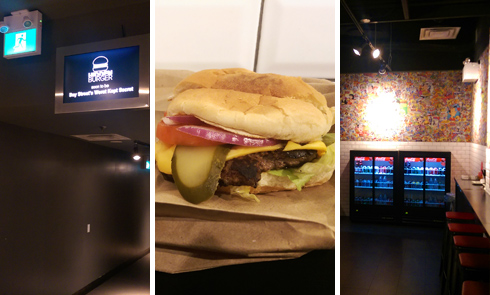 If nothing else, Hidden Burger certainly lives up to its name.  Tucked away in the Bottom Line, a sports bar near Union Station, there’s absolutely no signage for the place outside, and even when you get into the bar, it’s not immediately apparent that you’re in the right place.  It’s only when you walk through the place and go around a corner that you finally see it.

It strikes me as a thoroughly odd strategy to literally hide your restaurant and make random walk-ins completely impossible, but then what do I know about such things?  It’s either a genius marketing move or completely insane.

It’s mostly a take-out place, with only a few stools to sit across from the register.  They’ve got an admirably simple menu, with a cheeseburger (single or double), a veggie burger, and a weekly special, along with the requisite French fries.  I went with the cheeseburger, which comes topped with lettuce, tomato, pickles, and red onion. 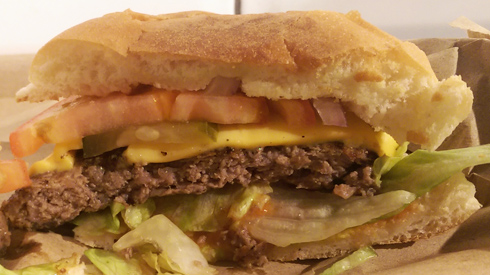 It’s a griddled burger, which ideally gets you a tasty, dark brown crust on the patty.  Often, the griddle isn’t quite hot enough and the crust isn’t particularly there.  But I actually had the opposite problem here, which I can’t say I’ve ever encountered in a burger cooked in this style.  The crust was coal black; it was burnt and it tasted burnt, with an acridly bitter flavour pervading every bite.  That griddle must have been insanely hot.

The patty was, not surprisingly, quite overdone, with a completely gray interior that was cooked all the way to the peak of well done.  It was actually still vaguely juicy, which was nice, but suffice it to say, it needed way less time on the griddle (and it was black on both sides, which makes me think it may have been intentional, as baffling as that seems).

The patty was also a bit too tightly packed and dense, but aside from that the texture was okay.

The flavour was decent enough (aside from the bitterness, of course). There was some mild beefiness, which is always nice.

As for the toppings, they suited the burger well, though the slice of American cheese wasn’t all the way melted, which is kind of crazy given how hot the cooking surface must have been.  And the soft, squishy bun suited the burger perfectly.

The fries were the resounding highlight. They were great — super crispy on the outside and creamy on the inside.  They were particularly good with the optional jalapeno aioli, which costs 50 cents and is worth every penny.