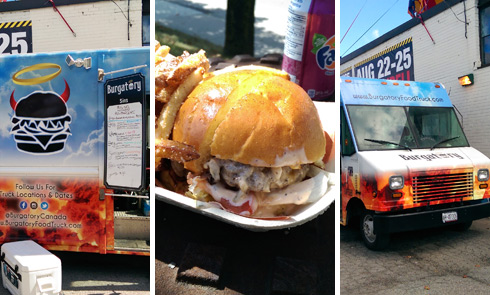 After the surprisingly mediocre Kevin’s Burger Obsession, the prospect of another food truck specializing in burgers didn’t exactly fill me with glee. One lousy food truck shouldn’t be able to ruin it for the rest of them, but still — I wasn’t super enthused to try the place.

But then I checked out Burgatory’s website; one line in particular caught my eye, regarding the patties being ground daily from “brisket, short rib and shoulder by Cumbrae’s Meats.”

Well, that’s… that’s actually a pretty well thought out blend of cuts, not to mention that Cumbrae’s sells top-shelf meat. This is in stark contrast to the numerous Toronto burger joints that proudly proclaim how lean their burgers are, and boast using inappropriate cuts like sirloin. And then I inevitably wind up facing down the latest sad, dried-out patty, chewing and chewing and chewing while another little piece of me dies.

Basically, my expectations were suddenly a little bit higher.

Actually finding the truck proved to be surprisingly difficult, however; they don’t seem to be particularly active on the weekends, and have the vexing tendancy to wait until the last second to post where they’re going to be parked (I almost missed them on this particular Saturday, as there wasn’t a peep on their Twitter account until 11:00am the same day. And then of course it was a ghost town, because it helps if people actually know where you’re going to be if you want them to buy your product, but I digress).

They have a few choices based on the seven deadly sins; sadly, they were all a little bit more busily-topped than I’d like. I went with the Sloth Burger: “Sloth Sauce, Velveeta, Hickory Sticks, Tomato and Lettuce on a Brioche Bun”

The patty was cooked all the way to well done, and was sadly not quite as juicy as I had hoped — but it was still fairly juicy, especially considering how thoroughly cooked it was.

More importantly, the beef was very obviously above average. It had a really satisfying beefy flavour, though the rest of the burger was doing its best to drown that out.

Most egregiously, the sloth sauce was sweet, tangy, and in the quantity it had been applied to the burger, completely overwhelming. They are not shy with that sauce, that’s for sure.

It says a lot about the beef, then, that even with the cloying sauce, the beefy flavour of the patty was still able to elbow its way through.

The other toppings were okay; the tomato and lettuce were the usual, and the hickory sticks added a pleasant amount of crunchiness that suited the burger well. The Velveeta, on the other hand, never had a chance — with that aggressive Sloth sauce, you can’t even tell the Velveeta is there (there wasn’t even a hint of cheesy flavour).

The bun was quite fresh and just substantial enough to hold up to the very messy burger, though it was a little bit too wide for the patty.

As for the fries, they were liberally tossed in grated Parmesan, and were definitely above average.