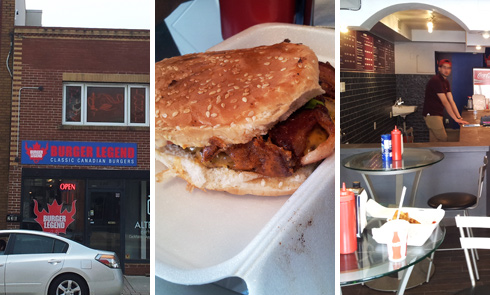 I don’t typically find myself in Streetsville, but when I heard a new burger joint had opened there, I figured I’d head over and give it a shot.  Burger Legend apparently started as a food truck, and I guess it did well enough to justify a stand-alone restaurant.

It’s a fairly small place, and kind of oddly laid out (it feels like there’s a lot of empty space where more tables could be put).  It’s also weirdly quiet, which is a little bit off-putting.

They have a handful of burger choices on the menu, but The Great One is labeled as their signature item, so that’s what I went with.  It’s topped with cheddar cheese, maple smoked bacon, mixed greens, tomato, and Bawss Sauce.

It’s a solid burger.  Like with most of the new burger joints opening in the GTA, it’s a smashed/griddled burger.  The beef is coarsely ground, it’s not too densely packed, and it has a little bit of crust from the griddle; it definitely has a pretty good texture.  It’s not the juiciest burger I’ve ever had, but it certainly isn’t dry, either.  It also has a decently beefy flavour. It’s pretty good.

The burger patty came piping hot, which means they probably aren’t giving it any time to rest after cooking.  Not sure if that would make a huge difference in this case, but it’s worth noting.

The very thickly cut maple bacon tastes okay, but it’s completely overwhelming as a topping on a hamburger.  Aside from its sheer thickness, it has an exceptionally strong maple flavour — it basically tastes like they dunked it in maple syrup immediately prior to serving.  On the burger, it’s all you can taste.  I removed it almost immediately (and even then, the maple flavour lingered).

The Bawss sauce, on the other hand, isn’t nearly as overwhelming as the bacon — pretty much the opposite, actually.  It was so subtle that neither my dining companion nor I could figure out what it actually tasted like, other than that it was mayo-based.  I typically like plain mayo on my burger, so this certainly wasn’t an issue for me.

The burger comes with both sides of the bun toasted on the griddle; it almost appears as though they toasted the assembled hamburger whole on the grill, as though it were a grilled cheese sandwich.  It’s an interesting touch, though it does lead to a less photogenic (and messier) hamburger.

All in all it’s a pretty tasty hamburger, though if you’re not already in the vicinity of Streetsville, it’s not particularly worth going out of your way for.

As for the chunky fries, they were decent enough — though they were a bit soggy, and a touch undercooked in the middle.