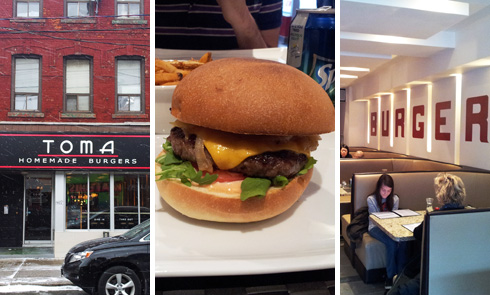 I am confounded.  Toma Burger Addiction confounds me.  This is a burger place that, somehow, gets almost every single element of their hamburger completely wrong.  Even if you were trying to make the ultimate mediocre hamburger, I don’t think you could succeed quite as brilliantly as Toma Burger Addiction has.

I will say that the design of the restaurant is quite nice.  Bright, spacious, and handsomely designed, it’s actually one of the more inviting-looking burger joints I’ve visited for this blog.

Unlike a lot of burger places in the city, it’s a sit-down restaurant. The service was fine; another non-food-related plus in this restaurant’s favour.

They have about a dozen burger choices on the menu.  I went with The Classic, which comes topped with “Angus beef, cheddar, caramelized onions, pickles, arugula, tomato, Toma secret sauce.”

They don’t specify how big the patty is, but I’d guess it’s about six ounces.  It’s not very good.  Though it’s not particularly dry (which is nice), the texture is off.  It’s ever-so-slightly mushy, and kind of sausagey.

There’s definitely some kind of seasoning mixed into the beef, which doesn’t help.  I also think it’s ground a little bit too finely.  It’s off.  It’s weird. 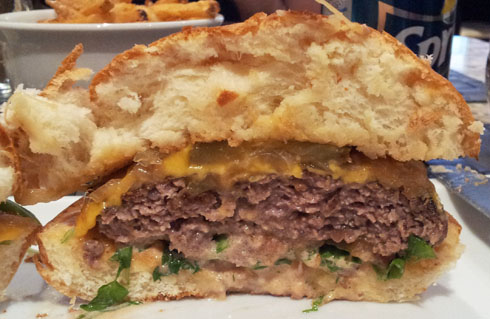 The patty has a muddled flavour that, just like the texture, is a little bit off.  It’s nothing that’ll make you pound your fist onto the table and decry the state of humanity; it’s perfectly edible, it just doesn’t taste right.  There’s no real beefy flavour.  There’s no flavour of anything, in particular.  It’s muddled.  I don’t know.  It was weird.  It was off-putting in a way that I can’t exactly put my finger on.

The bun, on the other hand, was clearly disastrous.  It was quite possibly the worst bun I’ve ever had on a hamburger.  As soon as I saw it, I knew I was probably in trouble.  It looks dense and impenetrable.  Cutting into it confirmed my suspicions; it was thick and unyielding and surprisingly difficult to saw in half.

Impossibly dense and sugary sweet, it was completely overwhelming and should not be allowed within fifty feet of a hamburger patty.  Of all the things that are confoundingly bad about this burger, the bun is clearly the most baffling.  I honestly cannot think of a worse bun for a burger.  It’s just so chewy and doughy and intensely flavoured.  It’s actually kind of insane how terrible it is.  It’s like someone took a pretzel bun, soaked it in sugar water and then left it out in the sun until they were satisfied that it had reached a properly brick-like consistency.

The Toma sauce was mostly just sweet and uninspired.  It’s only been a few hours since I ate this burger, and I already forget what it tasted like.  If only I could forget the rest of the burger quite so easily, but I fear it will be haunting my nightmares for weeks to come.

As for the fries, they were actually really good.  Thinly cut and perfectly cooked, they would have easily been the bright spot of the meal — but not only were they not served hot, they weren’t served warm.  They were room temperature.  Because why ruin the perfect storm of mediocrity, right?