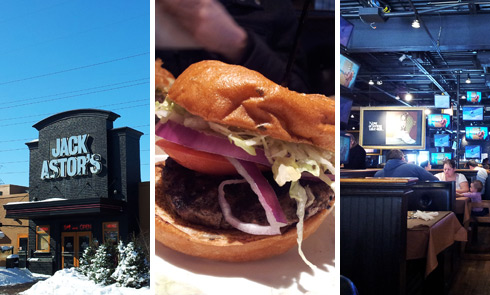 This is going to be a short one.  It’s hard to write all that much about a burger that so conclusively straddles that middle ground between good and bad, and that is exactly where this burger falls.  “Meh” is pretty much the perfect word to describe it.

Jack Astor’s is a casual chain restaurant, and as expected from a restaurant such as this, there are burgers on the menu.  I wasn’t expecting much, and I got pretty much exactly what I expected:  a perfectly edible hamburger that is almost instantly forgettable.

I ordered “The Classic,” which is their no-frills burger topped with lettuce, tomato, red onion (which I removed), and mayo.

The burger was fine.  This being a chain place, I had feared that they might serve a frozen burger or a meatloaf burger, but this was thankfully not the case. 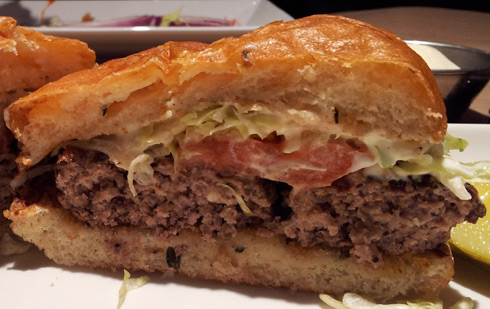 There are a couple of fairly significant issues that keep this burger firmly in the “meh” category.  First, and most predictably, the burger is too dry.  I know I sound like a broken record here; apparently wanting a hamburger to be juicy in Toronto is an unreasonable request, which is actually kind of maddening. But no, I’m not going to get into another rant about overcooking and acceptable fat percentages.  Not for you, Jack Astor’s.  Not for you.

And yes, the burger is overcooked, which just compounds the dryness issue.  The grilled patty is a bit over-charred, resulting in a burger that is a bit too crunchy in spots.  It’s also a little bit too tightly packed and dense, which makes it a tough chew.

The second issue is that it’s a bit bland.  The beef is obviously not the greatest, and while it tastes okay, it doesn’t taste like much.  Add in the fact that if it was seasoned with salt and pepper, I couldn’t taste it, and you’ve got a pretty bland burger.

Otherwise, the toppings were fine, and the fresh brioche bun, though slightly over-toasted, suited the burger well.

All in all, it’s not a bad hamburger — it’s just aggressively unmemorable.

As for the fries, though a tad on the soggy side, they were otherwise quite good.