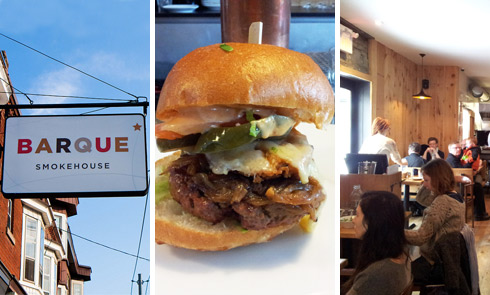 I’ve eaten a lot of bad burgers for this blog, but I don’t think any has disappointed me as much as the one from Barque.  Though I hadn’t heard a whole lot about their burger,  I’ve heard pretty much nothing but good things about the restaurant itself, and certainly went in with high hopes for their hamburger.  One of the best burgers I’ve had recently has been from Stack, another Southern-style BBQ place with a burger on the menu.  I had hoped for similar greatness from Barque.

Spoiler alert: this wasn’t a great burger.  Heck, I would have settled for good.  But this wasn’t even that.

Before I get to the hamburger, let me talk about the service, which was surprisingly poor.  I showed up at around one on a Sunday afternoon and the place was packed, so they are clearly doing okay, despite the lacklustre service and food.   We wound up sitting at the bar, which wouldn’t have been my choice, but was fine.

Less fine was the way we were completely ignored after our order was taken for the entire 45 minutes it took for our food to come.  Even less fine was the fact that I received a beef brisket sandwich with a salad on the side, despite the fact that I ordered a burger and fries.  So my dining companion and I wound up taking turns watching each other eat. 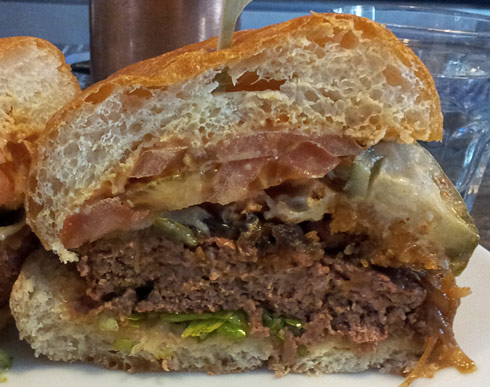 But this is a burger review, so let me talk about the burger.  As horrible as the experience was up to that point, I was completely ready for it to be redeemed by an amazing burger.  Sadly, no such redemption was in the cards that day.

I came during Barque’s brunch service, so I ordered the Brunch Burger, which is described as being topped with “Caramelized onions, gruyere, pickles, onion ring.”  It’s a bit more topping-heavy than I typically like for a burger that I’m reviewing, but I’m okay with making an exception every now and then.

It’s a meatloaf burger, and though the seasoning wasn’t particularly strong, it was still enough to completely wipe out whatever beefy flavour the (presumably low quality) beef might have once had.

Much, much more problematic was the burger’s downright repulsive texture, which was puzzlingly and off-puttingly mushy despite being cooked to well done and fully gray throughout.  I have no idea what was going on there — perhaps the meat had been ground too finely, or perhaps it was the stuff they mixed in, but the hamburger was inarguably a textural disaster.

As for the toppings: though I typically like caramelized onions on a burger, here their soft texture only emphasized the patty’s mushiness, and was highly unwelcome.  Same goes for the melty gruyere cheese.  The onion ring was fine, as was the fresh brioche bun, but there isn’t much that would have been able to save that weird, squishy patty.

The fries, too, were kind of puzzling.  They were completely dried out and crunchy, and bore a striking resemblance to a larger version of Hickory Sticks.  I’m honestly not sure if this was intentional or if they were simply overcooked.  They weren’t awful, but I didn’t have any particular desire to eat more than a handful.

I should probably note that when the bill came the hamburger had been comped, so at least they were willing to acknowledge that the service was fairly disastrous.

(Image of the sign in the header photo courtesy of alanosaur on flickr.  I was going to take the photo on my way out, but I guess I was in such a rush to get out of there that it completely slipped my mind.)

One thought on “Barque Smokehouse”